Alex Carchidi and Adria Cimino
(TMFacarchidi)
Author Bio
Alex began writing for the Fool in early 2020 and follows companies in the healthcare sector. Formerly a researcher in the biotech industry, he leverages his science background in his work as a writer and entrepreneur. His interests include exploring his hometown of Boston, traveling in Latin America, and value investing.
Follow @alexcarchidi

Intuitive Surgical (NASDAQ:ISRG) InMode (NASDAQ:INMD) are both technology-intensive companies that are aggressive disruptors in their respective healthcare markets, and the similarities don't end there. Whereas Intuitive Surgical makes da Vinci surgical robots used by general surgeons in hospitals, InMode produces advanced beauty treatment equipment that fills a similar role to both laser skin treatments and plastic surgeries. While Intuitive is a behemoth worth $126 billion, InMode's market cap is only $7 billion -- but both businesses have plenty of room to grow.

Will Intuitive's rock solid and highly recurring revenue model make it a better investment, or do InMode's novel products and its comparatively small size make it a more attractive pick for growth? Let's examine a couple of the arguments for each. 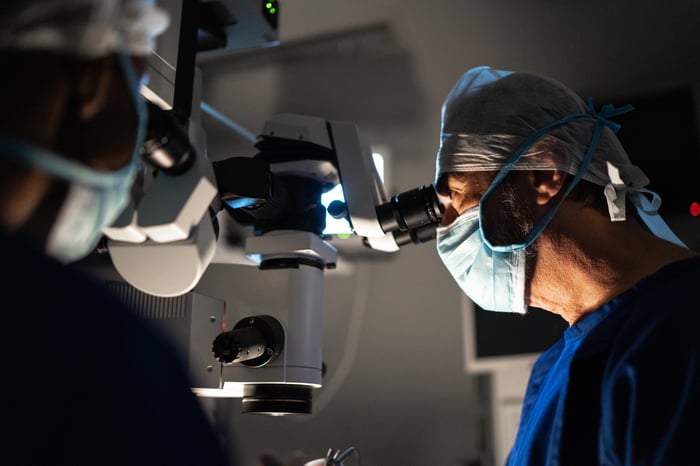 The bull case for Intuitive

Adria Cimino (Intuitive Surgical): Intuitive holds a whopping 79% of the robotic surgery market. And it's unlikely that will change any time soon. For two main reasons. First, hospitals pay about $2 million for Intuitive's flagship da Vinci robot. After spending that much, it's unlikely they will aim to replace the robotic system with an alternate one. Second, surgeons generally train on the da Vinci. Switching to a new system would require additional training. And that would mean an investment of time and money for hospitals and surgeons. So, it may be difficult for rivals to unseat Intuitive.

The coronavirus pandemic hurt Intuitive's profit and revenue. That's because hospitals postponed many non-urgent surgeries as they focused on managing COVID patients. So, there was little need to invest in new surgical robots or buy instruments and accessories. But this was a temporary problem. Intuitive's annual profit and revenue generally have climbed over the past decade. And the most recent earnings report shows activity is rebounding from last year's interruption. For example, da Vinci procedures increased 20% worldwide in the third quarter year-over-year. Once hospital operations return to normal, Intuitive's business should return to steady growth over time.

Now let's talk about how Intuitive generates revenue. Selling pricey surgical systems is great. But hospitals don't make that sort of purchase every day. Here's one of the best parts of the Intuitive story. The company actually makes most of its revenue through the sales of instruments and accessories -- not through the sales of the full da Vinci system. It also makes a fair share of revenue through the sales of services. Intuitive has installed 6,525 da Vinci systems worldwide. And they all need replacement of disposable parts and maintenance. This equals a huge steady revenue opportunity for Intuitive. And that should translate into share gains over the long term.

The (prettier than ever) case for InMode

Alex Carchidi (InMode): Plastic surgery is increasingly popular, but many patients are put off by its invasiveness as well as its cost. That's where the Israel-based InMode enters the picture with its array of less-invasive body contouring, fat melting, and skin remodeling technologies.

Using radiofrequency (RF) technology, the company's devices are intended for use by aesthetic surgeons in situations where plastic surgeries might otherwise be appropriate. But, RF-based procedures don't have as much downtime for the patient, nor do they require anesthesia or leave nasty scars. And, because the techniques aren't as burdensome for patients as getting surgery, they can also capture some of the market share that would otherwise be held by less effective noninvasive methods like laser skin treatments too. In short, InMode's products are disruptive innovations that can dramatically lower the bar for getting complex and high-impact cosmetic treatments.

In terms of its financial performance, InMode is strongly profitable, with a net profit margin of just over 46%, and its quarterly revenue grew by 57.7% year-over-year to reach $94.2 million per its latest earnings update. Similarly, quarterly net profits expanded by more than 87% year-over-year, and there's no sign of stopping. And with only $3.55 million in outstanding debt, it has plenty of leeway to borrow to fuel future growth. That means it shouldn't have many economic barriers when it comes to displacing older aesthetic interventions.

Right now, InMode is opening up distribution of its hardware to new countries in the EU and worldwide. It's also launching new devices and new attachments for its existing product roster that offer patients advanced noninvasive body sculpting capabilities that can't be found anywhere outside of a plastic surgeon's office, which should drive even more revenue growth moving forward.

Both Intuitive and InMode are highly likely to continue to grow for the foreseeable future, and both stocks are favorable investments. So, the question of which is the better buy is largely a question of your tolerance for risk.

Intuitive is an established leader in the robotic surgical space, and its business model has stood the test of time. That makes it a better option if you have a lower tolerance for risk. In contrast, InMode is the new competitor on the block, and it's pioneering a new technology that makes its products superior to the competition -- but its economic viability over the years to come is still unproven. As a result, it's probably the preferable choice for more aggressive investors.