Docebo is bringing AI to a massively inefficient space.

With over 6,000 publicly traded companies in the U.S., it can be extremely difficult to find the right stocks to watch closely. Finding ones that are actively disrupting their industry by bringing innovative technology to the space is even harder.

There is one artificial intelligence-focused company that appears to fit this description. It's fast-growing and has been a popular pick among growth investors. If you are in the growth investor camp, let's take a closer look at why Docebo (DCBO 2.42%) might be deserving of a spot on your watchlist. 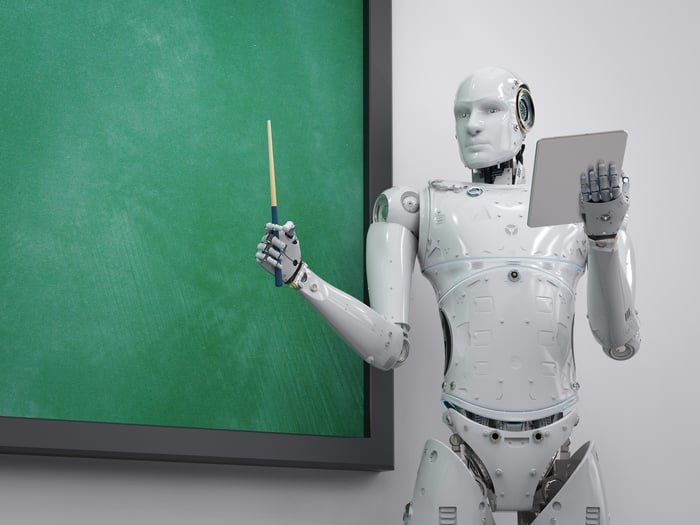 Hiring and training talented workers can be an expensive, tedious, and time-consuming process, which makes it all the more critical that businesses do what they can to retain their best workers. One way to do this is by providing effective training. Unfortunately, most corporate training programs only offer the bare bones of what businesses require and what employees want, even though effective training has been shown to boost job satisfaction, productivity, and retention.

Docebo's e-learning and training solutions take a different approach from the industry standard. The company realizes the benefits of effective, enjoyable training and e-learning, and it is trying to bring that to the world. Docebo is bringing AI and modern technology to the learning management system (LMS) space, allowing businesses to quickly develop pieces of training. Creating training can be extremely time-consuming and difficult to develop and the results can be dull and boring for a subset of employees. Docebo uses AI to ease the creation process for learning modules, and it creates them in a way that is more engaging and effective.

Docebo's AI then goes one step further. With Docebo Learn, employees can breeze through learning modules if the AI recognizes that they understand the material -- allowing for more customized training and less enforced boredom. Docebo Learn Analytics can dig into how effective and impactful training has been on business operations and productivity. Additionally, Docebo Flow can integrate training right into daily workflows, allowing for quick, easy training and reminders every day.

Docebo's efforts have met with some success. Amazon's AWS and Walmart are both Docebo customers, along with over 2,600 other businesses. Docebo reported $27 million in Q3 2021 revenue, which was up 68% year over year. Its average contract value on current contracts surpassed $39,000, which was up over 20% year over year. Impressively, the company's average contract value for deals made in Q3 and fulfilled going forward was nearly $59,000 (a 33% increase).

Docebo is still emphasizing growth over profits, as evidenced by its Q3 loss of $1 million in free cash flow, and the company's net income of about $0.7 million. That net income gain this year compares to a $1.2 million loss in 2020. Especially for both the company's size -- its market cap is just $2.5 billion -- and its growth rates, it is impressive to see Docebo on the border of profits. As any fast-growing company using AI, Docebo's valuation is high. The company trades at 27 times sales.

The company has a massive addressable market that could produce monster growth over the next five years. Docebo management reports a total addressable market of $30 billion by 2025, reflecting a compound annual growth rate of 21% from 2021.

Why it's only a watchlist stock

Even after considering the immense growth potential for Docebo, there are two primary concerns that make it a watchlist stock rather than a portfolio stock. First, it's still unclear how many businesses know the immense benefits of engaging in training. While Docebo knows that employees can be more productive, churn less, and be happier with improved, engaging training, I don't think that many businesses know that. This means that on top of selling its products, Docebo has to educate its customers about the benefits of its product, which could make Docebo's future success harder and/or more expensive.

Second, Docebo's products could be seen as a "want to have" rather than a "need to have" for businesses. While its product might be beneficial, I question how sticky and critical Docebo's product is to a company's core operations. If a recession were to hit or a business had to cut its budget, it would seem Docebo's solution might be expendable. That suggests Docebo's business is relatively fragile.

Because of these worries, I am keeping Docebo on my watchlist. If it can prove through sustained growth that it can effectively educate potential customers about its merits as a product, that would make me much more interested. Also, if the company were to increase its net retention rate -- which is currently at a relatively healthy 108% -- that would show me that its products are more sticky and critical to its customers' operations than I currently believe they are.

There is no doubting that the company is innovating its market. If it is successful, the company could see immense growth and produce market-crushing returns. But I'm holding off until I'm confident that Docebo has what it takes to generate continued success.

Why This AI Stock Could Produce Monster Returns

Why Docebo Stock Fell 13% in September

2 Monster Growth Stocks in the Making
413%