The electric vehicle maker has created massive amounts of wealth for investors, but there's one big reason to consider selling today.

The auto industry is clearly shifting toward electricity, with every major automaker pushing hard in the electric vehicle (EV) space. However, it was Tesla (TSLA 10.97%) that really got the ball rolling on this front, and investors have clearly noticed.

Here's a trio of reasons why investors might want to put some money to work in Tesla's shares, and one important reason why you might not want to. In fact, if you have profits in the stock, it might even be a good reason to consider locking in at least some of your gains. 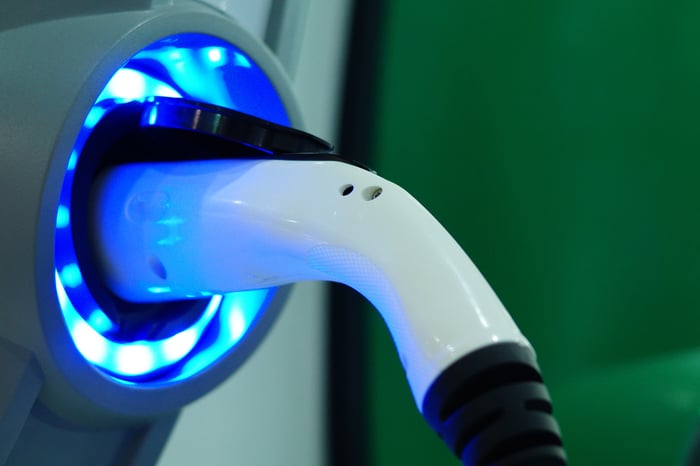 1. Tesla is hyper-focused on the clean energy transition

Tesla is, basically, the leading pure-play electric vehicle maker. There are others in the niche, but Tesla has long been the name to beat. And at this point, it is actually turning a profit, with positive earnings in each of the last five quarters. For many years the company basically just bled red ink. However, it has turned an important corner even though it only sold 240,000 or so cars in the third quarter. For reference, Ford (F 1.02%) sold more than four times as many cars in the quarter. So Tesla remains a small fry, but that's just fine if it's making money.

The key difference is that Ford and its peers are largely trying to balance the shift from gasoline to electricity. Tesla doesn't need to do that. In addition to cars, meanwhile, Tesla also has its hand in solar power and battery technology. So there are more avenues for growth as renewable power technology comes to the masses, and it has a very loyal customer base it can sell other products to. So it looks like Tesla could eventually be a much broader play on the clean energy space for those with an ESG bent.

Tesla is the brainchild of CEO Elon Musk. He's sometimes compared to Tony Stark from the Iron Man comic series, which is a way to suggest that he's a wealthy genius do-gooder. That characterization is debatable, since he has a team of experts that help him actually make electric cars and the technology behind them -- but what is very clear is that he knows how to promote the company he runs. And what he has created is quite impressive. While he has a habit of pushing the promotional envelope at times, that's been a net positive so far, and there's no reason to expect this to change. In fact, many investors own the stock partly because of Elon Musk.

3. Tesla has plenty of growth opportunity

A hyper-focus on a growing industry niche with a visionary leader at the helm. There's a lot to like in that description. However, what's really interesting here is that, assuming Tesla can maintain its industry cachet, there's a lot of room for it to gain ground on older competitors that simply don't have the same image. Go back to the sales numbers in point No. 1 that noted Tesla's sales are at less than a quarter of what Ford sold. And Ford is just one of many large global auto companies from which Tesla can steal market share by being cooler and hipper. For example, General Motors (GM 0.44%) sold 1.3 million or so cars in the third quarter. Yes, both are looking to grow their EV businesses, but their dominance of the gasoline-powered vehicle market doesn't necessarily give them an advantage in the EV space, where Tesla's brand is often top of mind. Indeed, the EV playing field is much more level, and Tesla has already proven it can compete effectively with the industry's biggest automakers. 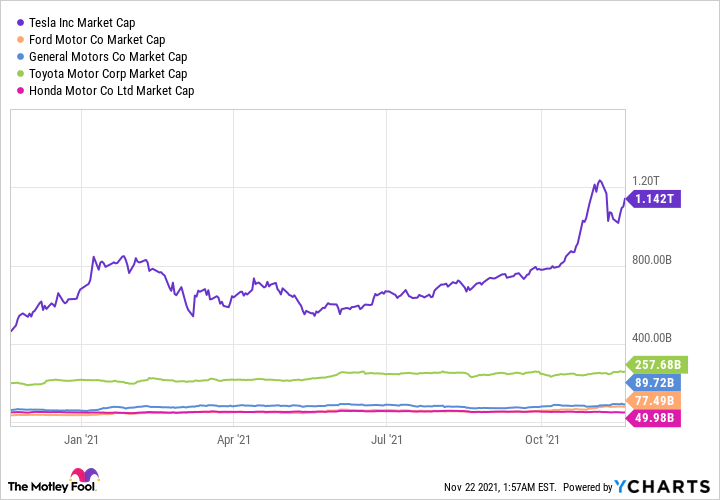 Time to lock in some gains?

The big problem with Tesla, and one that investors should really think about closely, is valuation. There is a number of ways to look at this, but the one that is probably the most shocking is market cap. Tesla's market cap is roughly $1.1 trillion, compared to Ford's $77 billion and General Motors' $89 billion. That's shocking because, going back to the sales numbers above, Tesla sold less than a quarter of the cars that Ford or GM sold in the third quarter. How could it possibly be worth more than 10 times as much as each of those two companies? Even with all the opportunities it has for growth in the years ahead, a lot of good news is clearly being priced into Tesla's stock today.

Investors who have ridden the stock up should probably think about taking some money off the table. In fact, in the past year alone the stock price has doubled. And that includes the recent volatility surrounding Elon Musk's stock sales. This isn't to suggest that you have to sell every share you own, but prudence hints that locking in some gains makes sense. Perhaps you can use the cash to add some diversification to your portfolio, which may be a little extra heavy on Tesla given its huge 1,200% gain since January of 2020.

Act before the situation changes

Nothing lasts forever, and Tesla's massive market cap relative to its peers is likely to reverse at some point. The company may make great EVs, but it hardly owns the EV market. And that will likely lead to an eventual revaluation of the stock. Since it's impossible to predict when that will happen, long-term investors should act now while they still have big stock gains. Locking in some of that profit may sting if the stock keeps going up, but it is the logical move for most investors given the very real risk that Wall Street is pricing in way too much good news. And that remains true even with all of the positive attributes Tesla has.

And if you haven't bought Tesla yet, well, it might be best to leave it on your wish list for now if you have even the slightest value bias.