The cryptocurrency fell almost 40% from its value in a week, but good news may be coming that could buoy it again.

Decentralized finance payment and liquidity token Loopring (LRC 24.16%) in the week after reaching an all-time high of $3.72 it touched on Nov. 10 tumbled about 38%, although it has since recovered some of the losses.

What's interesting is that there there are some hints of intriguing positive catalysts, including a possible alliance with one of the world's most notorious meme stocks. The speculation is vague and uncertain at this point, but Loopring may have the potential for a strong rise in the coming weeks, and lasting gains over the long term.

Loopring is a protocol that operates on top of an existing system, offering high levels of security in a completely decentralized format, along with an associated cryptocurrency native token. According to its website description, Loopring aims to make it so users don't need to "choose between security and performance," while offering "a low-fee, high-speed platform for trading, swapping, liquidity providing, and payments."

It's based on the Ethereum (ETH 5.93%) blockchain, already noted for its top-notch security, but using what's called Layer 2 (which carries out transactions off the blockchain to avoid congestion) avoids Ethereum's slowness and high fees. Additional features and utilities are under development. 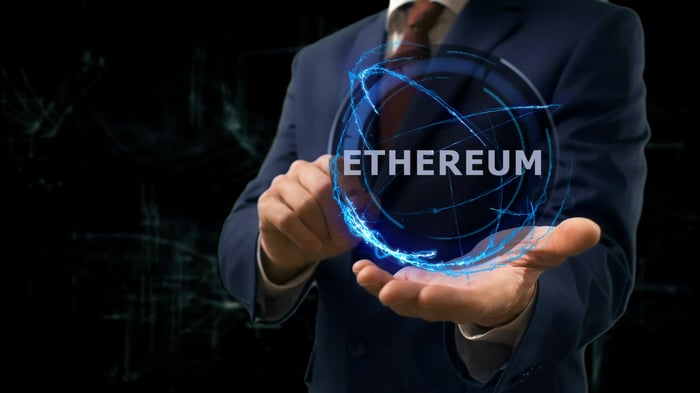 Loopring's initial coin offering was back in 2017, while its main net deployment occurred near the end of 2019. With cryptocurrency fees very high on many platforms, Loopring's low fees and fast processing times laid the groundwork for its widespread adoption and use. Its fully decentralized nature also promises to keep transactions and assets using its protocols safe from third-party interference, including, theoretically, meddling by governments.

Rumors of a Loopring and GameStop merger

There's scuttlebutt on cryptocurrency forums about the possibility of a partnership or even a merger between Loopring and meme stock GameStop (GME -0.18%). The video game and equipment retailer is slowly dragging itself back from the abyss of near-bankruptcy, thanks in no small measure to the WallStreetBets' army of retail investors and the short squeeze they triggered earlier this year. GameStop was able to cash in when its shares soared with a large stock offering, greatly boosting liquidity, though it's still casting about for a new business model that can carry it into the future.

Users on the Reddit subforum r/SuperStonk spotted Loopring Chief Executive Officer Daniel Wang moving a large bloc of Loopring cryptocurrency, possibly part of his own personal holdings, from Layer 1 to Layer 2 . This was interpreted by the Redditors who initially discovered the data as providing liquidity for the launch of a GameStop non-fungible token (NFT) marketplace using the Loopring protocol. One Reddit user found an NFT being minted by an address associated with nft.gamestop.com, according to Rarible data. CoinDesk also reported that code involving GameStop is in the works at Loopring, a development confirmed by Powerbomb Finance's founder Dennis Hui.

Perhaps more significantly, GameStop posted eight NFT-related jobs on its career page in late October, according to Business Insider, with the listings stating an "ideal candidate will have experience across several domains in gaming, content creation, partnerships, game design/development/mechanics, and a general understanding and experience with Ethereum, NFTs, and blockchain based gaming platforms."

Still, at this point, all that is available is speculation and guesswork connecting all the pieces, though some events, such as the transfer of the CEO's tokens to Layer 2, are verifiable. That move is visible on Etherscan, which provides a record of token transfers, and shows large recent shifts by the wallet "danielwang.eth."  The NFT job listings also existed.

Whether all those data points really signal a future GameStop-Loopring pact is unclear. However, these nuggets of information could be important in helping investors decide whether to buy into Loopring now.

Looking past the rumors

There's a saying among cryptocurrency enthusiasts borrowed from stock traders: "Buy the rumor, sell the news." This axiom was certainly proven true this past summer in the case of meme token Dogecoin (DOGE 2.99%), which soared on reports of unspecified but positive actions from Tesla CEO Elon Musk. After Musk actually spoke about Dogecoin, the coin tumbled to about a third of its all-time high.

Though Loopring is definitely risky, now might be the time to buy and get ahead of the speculation. The dilemma might be what to do should a deal come about. Loopring has several strong utilities built into it, unlike earlier, simpler cryptocurrencies such as Dogecoin. So selling should a deal with GameStop happen might not be the best move, beyond a possible partial sale for profit-taking.

Loopring has the same qualities that make some cryptocurrencies genuinely useful, and stands a good chance of growing in value during the next few quarters. A GameStop alliance or merger might accelerate that process, but Loopring could well take off even without a meme stock connection.

Why Fantom, Loopring, and Aave Are Rising Today

Loopring's Cryptocurrency Is Gaining Today: Is It Time to Buy?

Why Loopring's Cryptocurrency Is Soaring Today

Look Out Below! This Crypto Dropped More Than Netflix This Morning

Why Loopring's Cryptocurrency Is Gaining Today
401%