Stock markets remained under pressure on Friday, closing out a tough week that sent major market benchmarks sharply lower. The Dow Jones Industrial Average (DJINDICES:^DJI) has fared fairly well but is still down about 1,850 points from its highs in mid-November, marking a 5% correction. The S&P 500 (SNPINDEX:^GSPC) is down just 4.5% from its best levels, but the Nasdaq Composite (NASDAQINDEX:^IXIC) has had a deeper correction of around 7% from its highs.

Whenever the stock market is falling hard, it makes sense to look for companies that are bucking the downtrend and moving higher. On Friday, there were a couple of curious stocks that managed to post big gains. Zillow Group (NASDAQ:Z) (NASDAQ:ZG) and Krispy Kreme (NASDAQ:DNUT) couldn't be more different in terms of the focus of their respective businesses, but both managed to climb heading into the weekend. Below, we'll examine these stocks to look for clues about why they did well today.

Zillow gets its sales up

Shares of Zillow Group were up almost 11% on Friday, reversing some big losses from recent weeks. The online real estate company has managed to correct a situation that surprised a number of investors, and what it's doing now was a pleasant surprise for shareholders. 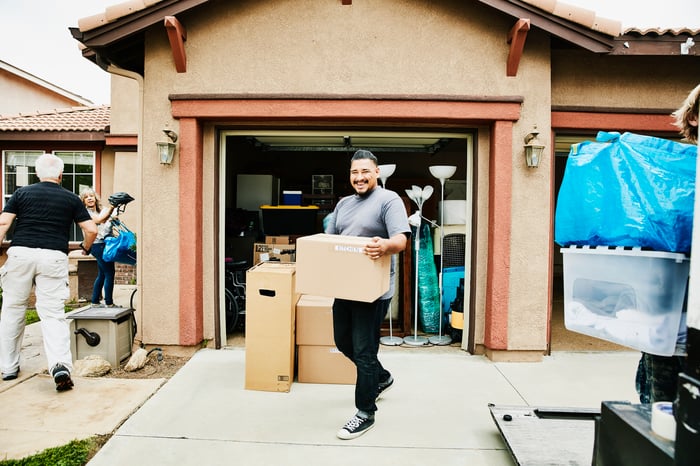 Zillow reported that it has managed to sell or enter agreements to sell or dispose of more than half of the homes it has in inventory under its Zillow Offers iBuying program. That represents what Zillow called "significant progress" in winding down the business segment, which apparently is the company's final strategy. Once promising, Zillow's iBuying unit caused heartburn for investors when it reported back in September that it had put a pause on its purchase activity because inventory levels had gotten too large.

Co-founder/CEO Rich Barton once again reiterated that Zillow will no longer be operating Zillow Offers, arguing that this will make the company more capital-efficient going forward. Moreover, in a nod to shareholders, Zillow announced a repurchase program of up to $750 million, putting the proceeds from its real estate sales to good use from an investor standpoint.

It can be hard to figure out how to deal with a company that makes an abrupt change to its business model. Zillow still has a lot of questions to answer, but investors were pleased to see at least some recognition of Zillow's need to take their interests into account.

A tasty day for Krispy Kreme

Shares of Krispy Kreme also moved higher by 11% on Friday. The stock has seen plenty of volatility since its late-June IPO, but even though today's gains didn't quite claw back all of the donut-maker's losses since then, investors were still pleased to see the progress.

The gains carried over from positive news on Thursday, when shareholders responded favorably to news that major investor JAB Holding had boosted its exposure to Krispy Kreme even beyond its current stake. JAB entered into a derivative arrangement with institutional investing company BNP Paribas, with a three-year total return swap essentially giving JAB the right to collect positive share-price movements from BNP as part of the agreement. JAB already owns nearly 45% of Krispy Kreme, and it intends to remain a key part of Krispy Kreme's capital structure for the foreseeable future.

However, not everyone's convinced that Krispy Kreme is going to be successful. Analysts at Goldman Sachs downgraded the donut stock from neutral to sell earlier this week, cutting their price target by $1 per share to $14. The company will have to navigate cost pressures as key ingredients experience inflation. If that hurts profit margins, it could be tough for Krispy Kreme to keep growing.

Krispy Kreme's most recent financial results were mouthwatering, but it takes consistent performance to keep shareholders happy. Investors will want to watch Krispy Kreme closely to see if it can keep up the pace and continue expanding.