Krispy Kreme (DNUT 1.74%) put out some mouth-watering third-quarter results for investors last night. As a result, shares jumped more than 14% in early trading today. As of 12:45 p.m. EST on Wednesday, the stock had pared those gains, but remained up 5.3%. 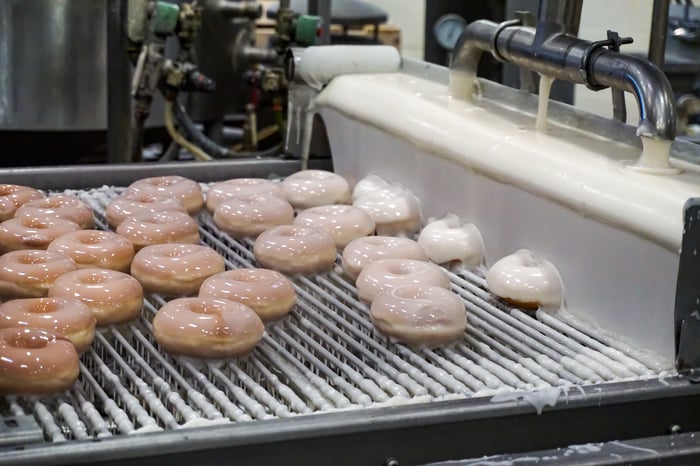 Five years after being taken private, Krispy Kreme began trading through an initial public offering (IPO) in July 2021 at $17 per share. Shares are down 35% from that level, but the company hopes its new business model will turn that around.

In the first nine months of 2021, Krispy Kreme said its organic revenue was negatively impacted by $80.7 million due to exiting from its legacy wholesale business. Instead, the company has adopted a hub and spoke model where it can produce fresh doughnuts for delivery. Those hubs include all locations where fresh doughnuts are made and prepared for delivery to retail locations.

Those deliveries include online orders, and the company said its e-commerce sales made up 17% of its retail sales in the third quarter. Krispy Kreme even declared a quarterly dividend of $0.035 per share in September.

The company provided guidance for organic revenue growth between 9% and 11% over the long term. But management said it expects even better performance next year when it will no longer be compared against the legacy wholesale business. Investors are giving the company credit for more progress in its transformation today after its most recent results.