It was an extremely eventful month for electric-vehicle (EV) startup Lucid Group (NASDAQ:LCID) in November, and investors took notice. The company's shares soared 43.2% for the month, according to data from S&P Global Market Intelligence.

The run in the stock came after the company delivered its highly anticipated first vehicle on Oct. 30. The successful initial public offering (IPO) of high-profile competitor Rivian Automotive less than two weeks later also led to a surge in EV names, including Lucid. 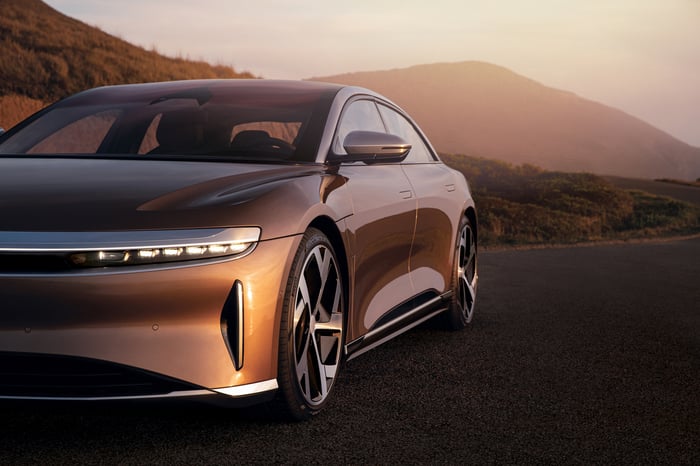 Then, on Nov. 15, the company released its third-quarter financial update. It told investors that in just the six weeks since the end of the third quarter, customer reservations for its Air sedan jumped 30%. At the same time, Lucid announced the vehicle was awarded the prestigious 2022 MotorTrend Car of the Year award.

It will take more than just praise and awards, however, for Lucid to live up to its current market cap of nearly $78 billion. But Lucid believes that as the EV technology leader, it will grow into much more. Lucid CEO and Chief Technology Officer Peter Rawlinson came from rival Tesla, where he led the engineering development of the Model S. And Rawlinson is quickly making his mark with Lucid, as its $169,000 Air Dream Range Edition earned a record 520-mile rating from the U.S. Environmental Protection Agency. That's more than 100 miles over Tesla's Model S rating.

While the jump in reservations for the company's Air models was promising, it still represents just 17,000 vehicles. Lucid expects that number to grow quickly, however. It has guided investors for sales to reach more than $2 billion next year. And with a luxury SUV in the works beginning late in 2023, the company plans to reach almost $10 billion in revenue for 2024. That growth will also come from expanding sales globally into Europe, the Middle East, Africa, and China over the next two years.

Lucid also plans to branch out beyond automobiles with its proprietary engineering and technology. It intends to leverage its battery technology expertise for applications in energy storage systems, and it already has an early prototype operating at Lucid headquarters.

Investors should still go in with eyes wide open. Lucid stock remains speculative, and the company still must prove it can execute at scale. But it is off to a fine start, and it's holding $4.8 billion in cash as of the end of the third quarter. That helps explain why aggressive investors bid shares up as much as they did in November.