My own portfolio holds shares of both memory-chip maker Micron Technology (NASDAQ:MU) and PC/server processor giant Intel (NASDAQ:INTC). I'm hardly alone in pairing these stocks, since many investors in the semiconductor industry find reasons to believe in both businesses.

But which one should you pick if you're looking for chip stocks today and only have room for a single ticker? 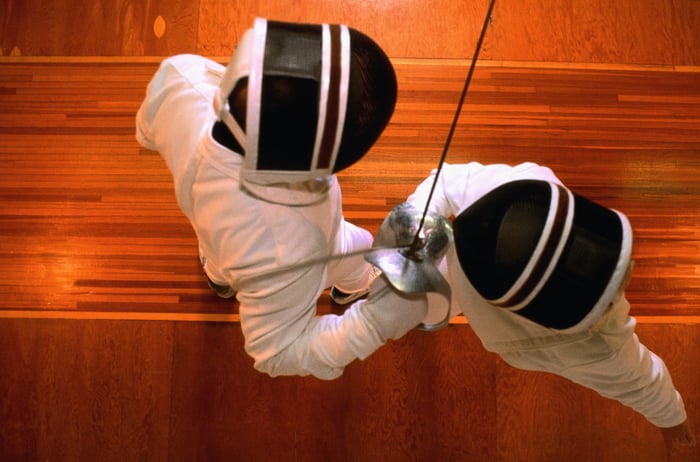 By the numbers, Micron is the clear winner

Comparing Intel's and Micron's financial data and market returns side by side, it's almost impossible to pick Intel.

So Micron's business is growing faster, investors are booking some massive gains, and the stock still looks extremely cheap. It's not easy to find single-digit P/E ratios tied to market-leading tech giants. So from a purely numerical perspective, Micron is the obvious choice.

But that's not the whole story

Micron is arguably cheap for a reason.

The memory chip market has been prone to brutal price wars every couple of years, followed by quiet periods where chip prices stabilized and Micron shares skyrocketed. The theory behind Micron's ultra-low valuation ratios is that the next round of plummeting chip prices must be just around the corner.

Street prices are indeed falling again after nearly two years of solid -- sometimes even rising -- pricing. Micron's management expects strong market demand from memory-hungry smartphones, automotive computing, and solid-state storage devices to support a profitable production level in 2018 and 2019. That's not good enough for some skeptics, who see the lower chip prices lasting longer than Micron's leadership expects. If you agree with that view, you might want to throw away Micron's numerical advantages and take a closer look at Intel instead.

The processor titan is experiencing some issues of its own. The next jump to a more efficient manufacturing technology is running late. A hiccup in the mighty manufacturing machine is giving rival Advanced Micro Devices (NASDAQ:AMD) an opportunity to steal market share for a few quarters.

But that's not the end of the world. Intel CFO Bob Swan published an open letter near the end of September, explaining that the market demand for PC and server chips is stronger than expected. The company is being forced to prioritize manufacturing of high-end, higher-margin products and leave the lower end of the markets underserved.

Intel is investing $15 billion in capital expenses this year to upgrade its facilities in four chip factories. The manufacturing delay is now on track to end in 2019. More to the point, Intel's largest target markets are acting healthier than expected.

So Intel appeals to investors with a yen for established market leaders, truly massive shipment volumes, and slow-but-steady growth prospects for the long run. This is your pick if Micron's volatility just doesn't float your boat.

Again, there's nothing wrong with owning both Intel and Micron. I have no plans to sell either one, for example. But they do come with very different investment theses, so make sure to pick the one that's a better fit for your own needs.