Please ensure Javascript is enabled for purposes of website accessibility
Log In Help Join The Motley Fool
Free Article Join Over 1 Million Premium Members And Get More In-Depth Stock Guidance and Research
By Harsh Chauhan - May 27, 2018 at 7:07PM

With rivals gaining ground and clients choosing competitor solutions, the company could face a rough ride due to this misstep.

On a day when Intel (INTC -0.03%) crushed Wall Street's expectations with a stellar first-quarter report, investors were worried about something else. Chipzilla revealed that its move to the 10-nanometer (nm) chip production process will be delayed once again due to yield issues, this time to an unspecified date in 2019.

When CEO Brian Krzanich said that the chipmaker might have gone overboard with its 10nm chip development targets, investors were unsettled, as the company has now officially lost its manufacturing lead in the chip industry. An advanced chip manufacturing process would have allowed Intel to reduce production costs, increase processing power, and make its chips more power efficient. And all of this is crucial in warding off the ever-growing competition.

But Intel investors will now have to wait until 2020 (assuming there are no further delays) for the volume production to begin, and this could spell trouble. 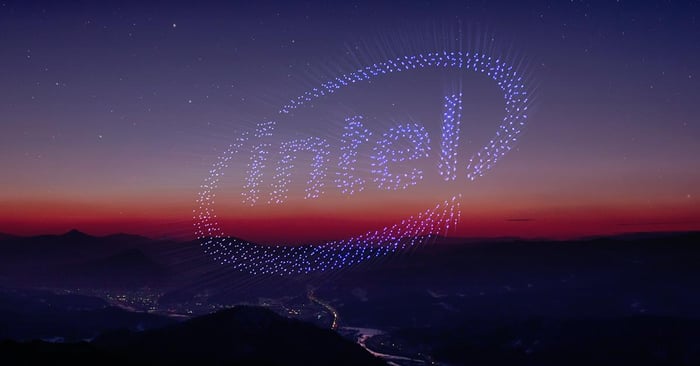 CPU dominance is in danger

Intel is the dominant supplier of central processing units (CPUs) used in PCs, holding an estimated 88% of this market at the end of 2017, according to Mercury Research. But rival Advanced Micro Devices (AMD -2.19%) has done well to make its mark in the CPU space with its Ryzen CPUs, which are based on the 14nm chip manufacturing process.

AMD increased its CPU market share to 12% at the end of last year from 9.9% the year before. However, AMD can inflict more damage on Intel this year as its latest second-generation Ryzen CPUs are based on an improved 12nm process (a refined version of last year's 14nm process).

AMD claims that the new Ryzen CPUs are 16% faster and 11% more power efficient than last year's first-gen offerings. But the bigger play for AMD lies elsewhere, as the second-gen Ryzen chips are just a steppingstone to something more important.

AMD plans to leapfrog Intel's chip manufacturing technology by next year with its Zen 2 architecture, which is based on a 7nm manufacturing process and is slated for a commercial launch next year. The fact that AMD's foundry partner TSMC has already started volume production of 7nm chips lends credibility to AMD's ambitions to attack Intel's manufacturing lead. This doesn't bode well for Intel's client computing group (CCG), which accounted for almost 51% of revenue last quarter.

Intel has been relying on higher average selling prices (ASPs) of its processors to drive growth in CCG and beat the flat PC shipment volumes. For instance, the segment's revenue increased 3% year over year in the latest quarter on the back of a 7% increase in desktop ASPs and a 1% increase in notebook ASPs. But the company could be forced to reduce prices of its CPUs to overcome AMD's threat and defend market share, and Intel is no stranger to such a strategy.

This spells trouble for its CCG segment profitability. The segment's operating margin was down 4% last quarter to 34%, with Intel blaming the drop on 10nm transition costs. With the transition to 10nm still some time away and competitive threats rising, Intel's CCG business looks set for a rough ride.

The fallout from Intel's 10nm delay won't be restricted to the CPU business. The data center group (DCG), which is the company's second-largest source of revenue with a third of the total top line, will also feel the heat.

Intel has relied big time on DCG to drive growth. The segment reported 24% year-over-year growth in the latest quarter and could exceed $20 billion in revenue this year if it keeps growing at its current pace. Intel credits its Xeon processors for this impressive growth. They are witnessing strong demand thanks to their application in areas such as artificial intelligence (AI) and high-performance computing.

The segment's terrific growth clearly indicates that Intel's latest Xeon processors (which are also based on a 14nm platform) have helped it maintain a near monopoly in server chips. But AMD has managed to make a mark here, thanks to its EPYC server chips that were launched at aggressive prices last year.

Server original equipment manufacturers have been warming up to EPYC, giving AMD hope that it could get a mid-single-digit share of the server chip market by the end of 2018. But AMD can do much more, as its "Rome" server chips -- based on Zen 2 architecture -- are expected to succeed EPYC next year.

AMD's data-center roadmap clearly indicates that it will start manufacturing chips on the 7nm process between now and 2020. Now that AMD has completed its Zen 2 design, its next-gen server chips are expected to come out in late 2018, and deployment is expected to begin in 2019.

The EPYC Rome is expected to pack stronger technical specifications thanks to the improved manufacturing process. And it will probably help AMD grab a bigger piece of the server chip market in the long run.

PSG has been gaining impressive traction recently as the likes of Microsoft and Baidu have selected Intel's programmable chips to accelerate AI workloads in data centers. In fact, Intel saw a 150% increase in sales of programmable data center chips last quarter, boosting the segment's revenue by 17% to $498 million.

But Xilinx has a new weapon in the form of Project Everest, which is based on a 7nm architecture and is expected to start shipping next year. Xilinx is claiming that its Everest chips will be 20 times faster at running AI workloads, compared to the existing products on the market. Intel, meanwhile, will be stuck on its Stratix 10 programmable chips built on the 14nm Tri-Gate process that's three years old already.

Turn the clock back two years, and you would see Intel dominating rivals such as AMD. But times have changed, and Intel's customers have been choosing rivals' products. For instance, AMD now has over 40 EPYC-based server systems on the market thanks to the likes of Hewlett-Packard Enterprise, Dell EMC, and Cray, among others. Amazon, Huawei, and Alibaba, meanwhile, chose Xilinx's programmable chips last year as the company enjoys a significant technology lead over Intel that could expand further.

There will be no immediate impact on Intel because of its 10nm delay. Rivals are still working on advanced manufacturing processes, and even they could run into trouble. But if Intel is unable to keep up as its rivals take the next step, the chip giant could be in choppy waters.