Please ensure Javascript is enabled for purposes of website accessibility
Log In Help Join The Motley Fool
Free Article Join Over 1 Million Premium Members And Get More In-Depth Stock Guidance and Research
By Ashraf Eassa - Apr 22, 2018 at 11:31AM

Its biggest rival pulls ahead.

DigiTimes just published an overview of the cutting-edge chip manufacturing landscape. In the overview, the company says that Taiwan Semiconductor Manufacturing Company (TSM 3.04%) is set to start mass production on its 7-nanometer chip manufacturing process in the second quarter of 2018, with an enhanced version of that technology going into production in early 2019. 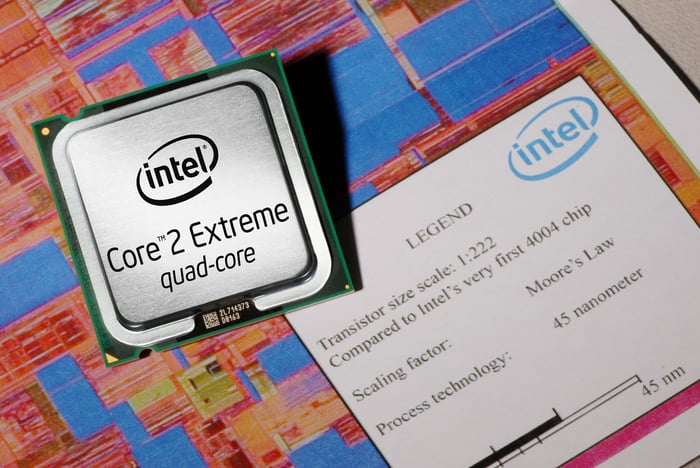 At this point, I think it's safe to say that Intel has lost its manufacturing leadership position to TSMC. Let's go over two key implications of this.

Since most of Intel's competitors rely on third-party chip manufacturing companies like TSMC to build their products, TSMC's strengthened technology position should translate into better products from TSMC's customers -- the products that'll go head to head with Intel's products in the marketplace.

Product competitiveness isn't determined solely by manufacturing technology, but now that TSMC has caught up with Intel (and actually seems to be a little ahead), Intel has fewer tools in its arsenal to try to build the world's best products.

Intel has been talking about trying to enter the contract chip manufacturing market in a bid to compete directly with the likes of TSMC for quite some time, though the business itself has yet to generate material revenue. The company's pitch has typically been along the lines of: "We have superior technology than the competition, which attracts potential customers."

Now that Intel doesn't appear to have a technology advantage, I don't see any reason a potential customer would risk their business on an unproven company that managed to turn a multiyear technology lead into parity at best, and at worst, a slight laggard position.

Considering these dynamics, coupled with the fact that Intel hasn't announced any new customers for its contract manufacturing division in quite a while, I think its efforts to try to become a contract manufacturer will fail spectacularly. If Intel needs to start cutting costs, expect this division to be among the first casualties.