Please ensure Javascript is enabled for purposes of website accessibility
Log In Help Join The Motley Fool
Free Article Join Over 1 Million Premium Members And Get More In-Depth Stock Guidance and Research
By Ashraf Eassa - Feb 19, 2018 at 10:47AM

The chipmaker's own data contradicts its marketing spin. Most computer processors incorporate a type of extremely fast memory, known as SRAM. Since SRAMs are such common structures, one simple way to compare the relative densities of chip manufacturing technologies is to look at the area that an SRAM bit cell occupies. Now, SRAM bit cells can be made up of different numbers of transistors (transistors are the basic building blocks of a chip), so for such a comparison to be valid, the SRAM bit cells need to be made up of the same number of transistors. 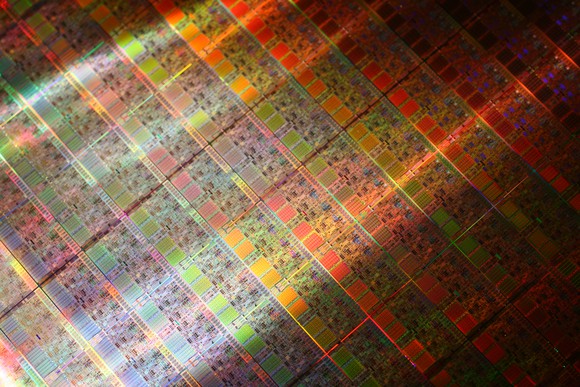 Indeed, while the other three companies' 7-nanometer technologies are all within spitting distance of one another in terms of six-transistor SRAM bit cell size, Intel's 10-nanometer stands out as being woefully behind.

According to an EE Times article, the Intel engineer who presented the details of the company's 10-nanometer SRAM bit cells at the ISSCC admitted that Intel's technology was "within 15 percent of the smallest reported 7-nm cell."

Considering that Intel has routinely claimed to be substantially ahead of the competition in terms of transistor density, this is quite an admission.

Minor differences in SRAM bit cell sizes aren't going to fundamentally shake up the competitive landscape, but the trend that we're seeing very well could.

Intel's manufacturing delays have led to delays (and, in some cases, cancellations) of important products that have hurt the company's competitive position. Moreover, these manufacturing technology delays seem to affect Intel alone -- TSMC and Samsung have consistently met their manufacturing technology release schedules over the years, and it's even starting to look as if GlobalFoundries (which has historically been unreliable) is cleaning up its act.

In addition to delays, it's starting to seem like Intel's manufacturing technologies are less competitive than they historically were, no doubt due to the substantial delays. Intel seems to have lost the lead in density (which is important for keeping chip sizes competitive), and, if it's not careful, it could lose whatever lead it might have in manufacturing technology performance and power efficiency.

The problem with Intel doubling down on its own chip manufacturing technology is that if it's unsuccessful, it risks seeing a further erosion in its competitive position (since Intel's competitors rely on TSMC, Samsung, and GlobalFoundries for chip manufacturing), which could negatively impact its business performance for many years to come.