Please ensure Javascript is enabled for purposes of website accessibility
Log In Help Join The Motley Fool
Free Article Join Over 1 Million Premium Members And Get More In-Depth Stock Guidance and Research
By Ashraf Eassa - Apr 28, 2018 at 10:35AM

A great report from the chipmaker.

On April 26, chip giant Intel (INTC -0.79%) reported its financial results for the first quarter of 2018, and they were nothing short of excellent.

Revenue came in at $16.1 billion, up 9% year over year and beating the company's guidance of $15 billion (give or take $500 million). The company also reported operating profit of $4.5 billion, handily beating guidance of roughly $3.75 billion. Earnings per share on a GAAP basis hit $0.93, also cruising past Intel's EPS guidance of $0.65. 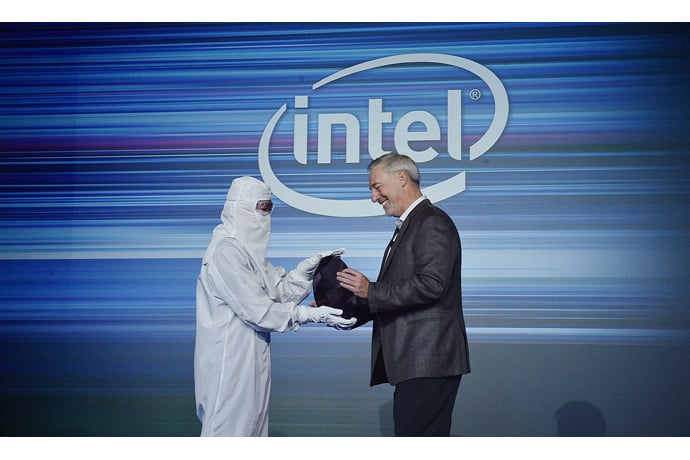 Intel also raised its full-year 2018 revenue guidance to $67.5 billion, up from $65 billion prior. Based on the new guidance, the company's revenue is set to grow by nearly 7.5% -- a respectable result for a company so large.

Let's dive deeper into some of the factors that drove this better-than-expected performance:

Intel reported that revenue in its Data Center Group (DCG), which sells processors and other components into server, networking, and storage applications, grew 24% year over year in the quarter. This performance, according to CEO Brian Krzanich, was due to "broad-based demand strength" across all of the segments that DCG serves (e.g. enterprise server, cloud server, and networking).

On top of high demand for these chips, Intel reported that it observed a "customer preference for high-performance products," which helped boost the average selling prices of the chips that it sold into this market.

Intel has stressed that DCG is expected to be the company's key growth engine, especially as it continues to become an increasingly large part of the company's business. Since this is the business that Intel is betting its future on, it's encouraging to see it perform so well.

However, Intel now forecasts that its "PC-centric" revenue will be approximately flat this year. During the first quarter of 2018, Intel reported a 3% increase in Client Computing Group (CCG) revenue, which was largely thanks to strength in its notebook computer shipments (year over year, average selling prices rose 1% and unit shipments grew 4%).

Based on the strong performance in the first quarter and the demand signals that the company is seeing for the second quarter of 2018, the company likely thought it reasonable to forecast a roughly flat performance in its PC-centric revenue. That increase clearly contributed to the company's improved revenue outlook.

Intel clearly saw better-than-expected financial performance in its two largest businesses, DCG and CCG. Since these two businesses, collectively, made up about 83% of the company's revenue last quarter, it's little surprise that strong results in one or both of these segments should translate into excellent overall quarterly performance.

For the rest of 2018, it looks like Intel's performance will continue to be solid, so for now, shareholders can breathe easy. Over the medium to long term, Intel's business isn't without challenges. Especially because competition in its core markets is heating up, and the company is grappling with bringing its next-generation 10-nanometer chip manufacturing technology into mass production to support planned product launches.