Here's what to look for when Chipzilla reports earnings.

Chip giant Intel (INTC -2.76%) has done well for its stockholders recently, with the stock up roughly 50% over the last 12 months. That stock surge has been driven by a better-than-feared personal computer market (Intel's largest market), substantial boosts in profitability, and an increasingly diversified revenue stream.

On April 26, Intel is slated to report its financial results for the first quarter of 2018. Let's go over what to expect.

When Intel reported its earnings results for the fourth quarter of 2017, the company also provided financial guidance for both the first quarter of 2018 as well as the entirety of the year. 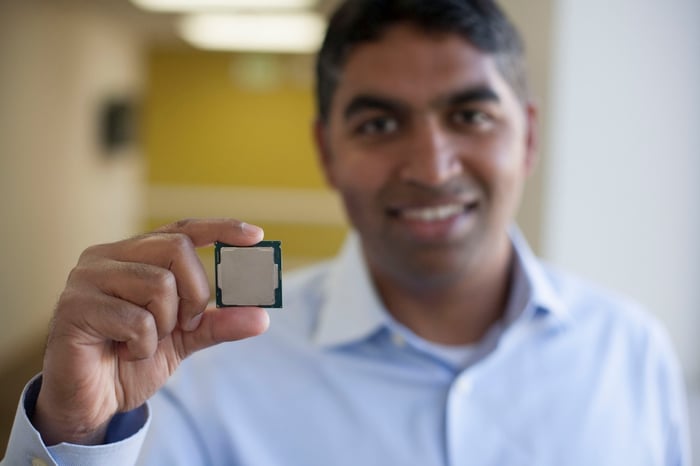 For the first quarter of 2018, Intel told investors to expect revenue of around $15 billion (plus or minus $500 million), with operating margin -- that is, the percentage of that revenue that gets converted into operating income -- coming in at 25%, so Intel should report around $3.75 billion in operating income for the fourth quarter.

In terms of earnings per share -- which represents the amount of net income Intel generates divided by the number of shares it has out -- Intel guided to $0.65 per share (plus or minus $0.05).

For some context, Intel reported revenue of $14.8 billion in the first quarter of last year and operating income of $3.6 billion. Earnings per share landed at $0.61.

It's always worth taking a look at aggregate analyst expectations for the quarter to get a sense of how bullish -- or bearish -- the analyst community is as a whole. The sentiment of analysts can influence, sometimes significantly, overall market sentiment.

The average analyst estimate for Intel's financial performance in the first quarter of 2018 is $15.05 billion in sales, which is right around Intel's guidance, and earnings per share of $0.72. Now, it may seem that analysts are more bullish on Intel's earnings-per-share performance than Intel is, but that's just because the analyst estimates refer to non-generally accepted accounting principles, or non-GAAP, figures, which exclude things like one-time charges.

On a non-GAAP basis, Intel's guiding for earnings per share of $0.70 (plus or minus $0.05). Analyst expectations are ever so slightly ahead of the midpoints of Intel's own financial guidance.

In other words, look for it to be a pretty standard -- yet solid -- quarter for the chipmaker.