The maker of Spam keeps boosting its payout.

Investors have always been interested in stocks that pay dividends, but lately, low interest rates on bonds and other fixed-income investments have made solid dividend payers even more valuable. Among the most promising dividend stocks in the market is Hormel Foods (HRL 0.94%), and one big reason is that it is one of the few exclusive companies to make the list of Dividend Aristocrats.

In order to become a member of this elite group, a company must have raised its dividend payouts to shareholders every single year for at least a quarter-century. Only a few dozen stocks manage to make the cut, and those that do tend to stay there for a long time.

Hormel is famous for Spam, but it offers a full line of meat and other food products, ranging from Chi-Chi's salsa and tortillas to Dinty Moore beef stew. Like many consumer-oriented businesses, Hormel has built up a reliable customer base that gives it a dependable and predictable flow of cash that it can then funnel out to shareholders. Let's take a closer look at Hormel to see whether it can sustain its long streak of rewarding dividend payouts to investors.

What's happening at Hormel?
Hormel has done a good job of handling the challenges it has faced recently. Despite pressures from high feed costs resulting from last summer's drought, its most recent quarterly results included a 1% gain in net income on a 4% increase in revenue. Moreover, the company boosted its full-year guidance by $0.03 per share, citing improving margins in its pork segment and continued strong performance from its Grocery Products division. Even though grocery products represent a small piece of Hormel's business, it's becoming increasingly important, as the recent split of Kraft Foods has created more urgency among competitors like Hormel to defend their turf and seek ways to expand.

Along those lines, the biggest recent news from Hormel came at the beginning of the year, when it announced it would buy the Skippy peanut butter brand from Unilever for $700 million. Somewhat surprisingly, Skippy is a major player not just in the U.S. but in China as well, where it's the No. 1 peanut butter brand. As a result, the deal helps bolster Hormel's attempts to expand internationally, and investors have applauded it as the stock that has risen almost 30% in response.

But the key for Hormel remains pork, which still represents the bulk of its business. That industry has seen mixed results lately, as domestic pork consumption has been weak but exports have kept the business growing. Tyson Foods relies more on chicken than pork, but its pork business saw sales increase and was the highest-margin division at the company. With Butterball turkey producer Seaboard having expanded its pork exposure by buying out private company Gusto, interest in pork remains high. 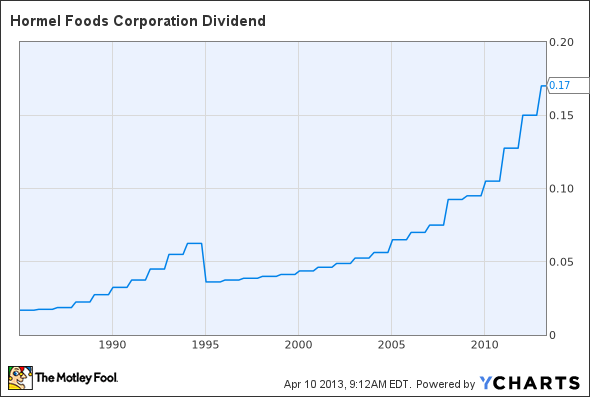 Notwithstanding a share-split-related glitch in the chart above, Hormel's dividend growth has accelerated in the years since the financial crisis. With a boost of 13% in its quarterly payout earlier this year, the company clearly believes that its improved prospects warrant a more generous sharing of profits with its investors.

When will Hormel's dividends rise again?
Hormel has traditionally kept its dividend increases to one per year, so investors shouldn't hold their breaths expecting any further action until early next year. But with 47 years of navigating the changing food industry, Hormel has what it takes to adapt to changing conditions and keep raising its dividends well into the future.

Click here to add Hormel to My Watchlist, which can find all of our Foolish analysis on it and all your other stocks.

What Is a Dividend Aristocrat?
These Stocks Just Raised Their Dividends