Please ensure Javascript is enabled for purposes of website accessibility
Log In Help Join The Motley Fool
Free Article Join Over 1 Million Premium Members And Get More In-Depth Stock Guidance and Research
By Eric Volkman - Dec 5, 2014 at 9:01AM

Two of these three companies are satisfying the hunger for higher payouts, while a third is prescribing them as medicine.

Dividend hikes are one of the best gifts a stock investor can receive. Not only do they put extra money directly into a shareholder's pocket, they often boost the price of the affected stock.

Why? Because the market is willing to pay that much more for the extra payout. Companies that improve their long-term fundamentals typically have extra resources to add to their distribution over time.

Keeping that in mind, here's a look at three stocks that upped their distributions last week.

Hormel (HRL 0.50%)
Nearly every American is familiar with this food company's brands. The company sells the (in)famous Spam, plus Skippy peanut butter and Muscle Milk drink, among other goods. These products continue to sell, as the company just lifted its quarterly dividend by 25% to $0.25 per share.

This is nothing new for Hormel, a serial dividend payer and raiser. The company has paid a dividend for almost 350 quarters in a row, dating way back to 1928. It's hiked its distribution in each of the last 49 years, which makes it a dividend aristocrat -- one of the very few stocks that has done so for at least 25 consecutive years. 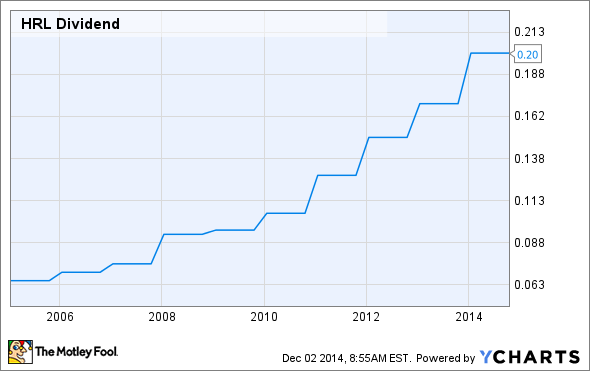 In terms of its finances, Hormel has plenty of cash to pay for the meal, and have enough left over for dessert -- it's free cash flow positive, with sufficient cash to cover the new dividend. This is due in no small part to the record per-share quarterly and annual earnings, plus a new all-time high for USD-denominated sales the company just reported.

Hormel has managed to serve up a dividend through a stock market crash or several, the Great Depression, and World War II. Unless something more apocalyptic happens, we can assume fairly safely that it will be able to maintain its new, now-in-family size dividend.

The upcoming Hormel payout will be distributed next February 17 to shareholders of record as of January 20.

McCormick (MKC 1.16%)
Elsewhere in the food sector is this firm, a veteran supplier of comestibles that concentrates on spices, extracts, and mixes. Like Hormel, McCormick is many generations old (it was founded in 1899) and is a dividend aristocrat. It's maintaining that status with an 8% bump to its quarterly payout, to $0.40 per share.

Similarly to its Spam-making peer, McCormick has been doing well lately. Net sales and, particularly, bottom line were up in the company's most recently reported quarter, with the latter advancing by 18% on a year-over-year basis.

Operating cash flow, meanwhile, came in significantly higher than at the same time last year. That helps provide plenty of cushion for the dividend, and incidentally also allows the company to spend quite a bit more on its capital expenditures. 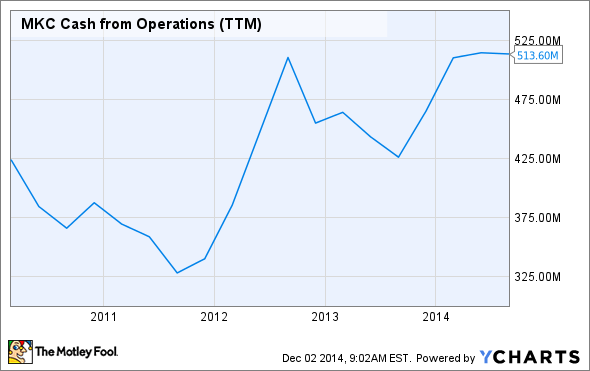 McCormick is a solid business that knows how to grow in spite of its maturity. It also seems to know what it's doing with its dividend policy, which is sensible and conservative. Its distribution, then, seems sustainable, and future increases thereof likely.

McCormick's new dividend is to be handed out on January 14 to shareholders of record as of December 31.

Merck (MRK 2.35%)
This pharmaceuticals giant tends to be cautious and incremental about its dividend improvements, as was the case last week. Merck declared a $0.01 increase in its quarterly distribution to $0.45 per share; that penny was also the amount of the previous two raises.

Considering the company's most recently reported quarter, the caution was warranted. Net profit dropped to $895 million from the year-ago quarter's $1.1 billion, while sales slipped by 4% to $10.6 billion.

Nevertheless, there have been enough positives to keep investors interested. Merck's promising animal health segment saw sales grow by 11%, while it managed to close the sale (for $14 billion) of its declining consumer care division at the beginning of October. On the products front, it won the valuable breakthrough designation from the Food and Drug Administration for its melanoma treatment Keytruda.

Even without that $14 billion, Merck's financial position looks solid; in the first nine months of this year its operating cash flow topped $9 billion while its capital expenditures were less than $1 billion. That free cash flow was more than sufficient to pay the $3.9 billion the company handed out in dividends. 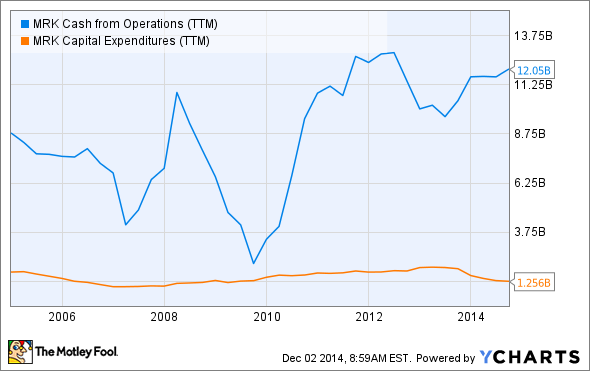 $0.01 per share shouldn't make any kind of a dent in that situation, so Merck investors should feel secure with their firm's dividend policy.

The company's upcoming distribution is to be paid on January 8 to holders of record as of December 15.

Eric Volkman has no position in any stocks mentioned. The Motley Fool recommends McCormick. Try any of our Foolish newsletter services free for 30 days. We Fools may not all hold the same opinions, but we all believe that considering a diverse range of insights makes us better investors. The Motley Fool has a disclosure policy.

3 Growth Dividend Stocks to Buy in May