Please ensure Javascript is enabled for purposes of website accessibility
Log In Help Join The Motley Fool
Free Article Join Over 1 Million Premium Members And Get More In-Depth Stock Guidance and Research
By Sean Williams - Feb 9, 2016 at 7:55AM

You might be witnessing a sea of red, but the recent retracement in this index could be a very good thing for America's largest companies.

Red arrows can sometimes be cause for cheer. Image source: Pixabay.

Another day, another triple-digit loss for the Dow Jones Industrial Average on Monday. Don't think the other indexes were spared, either, with the S&P 500 closing lower by 1.4% and the technology- and biotechnology-heavy Nasdaq Composite taking the worst beating once again, down 1.8%.

Although the broader indexes had taken a bit of a breather after bouncing from their mid-January lows, we're now sitting very near a two-year low once again. Crude oil continues to hover around $30 per barrel, China's GDP growth for 2015 was its weakest in 25 years, helping to push the Shanghai Composite firmly into bear market territory, and global growth prospects keep pushing lower, causing some analysts on Wall Street to offer bearish near-term forecasts.

One chart that has America's biggest companies smiling
Despite the seemingly indiscriminate sea of red that has basted the broader market since the beginning of the year, the recent drop-off in one particular index should have corporate America and investors smiling from ear to ear. 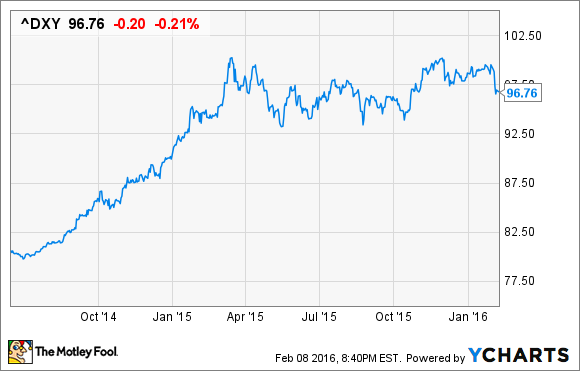 The U.S. Dollar Index, which is a measure of the dollar's performance against a basket of six major currencies, had its worst week in more than four years last week, falling more than 2%. Understandably this is just one week we're talking about here, and rarely does a few trading days make for a trend. However, there are bigger implications here if indeed the U.S. dollar is reversing course.

A strong dollar has crushed U.S. multinationals
Since bottoming around 80 in July of 2014, the U.S. Dollar Index has been practically unstoppable, hitting the 100 mark on at least four separate occasions. While a stronger dollar is great news for U.S. consumers who enjoy traveling abroad, and for foreign companies that do business in the United States, it's often terrible news for U.S. multinational companies that have substantial business operations in overseas markets. Since U.S. multinational companies are required to report their earnings in U.S. dollars, it means they often lose the difference in appreciation between the dollar and the correlative fall in the currency of the country they're operating in overseas.

A really good example of how a stronger U.S. dollar has hammered multinationals can be found in the pharmaceutical sector. Industry giants like Johnson & Johnson (JNJ -0.89%), Pfizer (PFE 0.50%), and Merck (MRK -0.01%), which each generate tens of billions of dollars in sales overseas annually, have witnessed their sales dramatically reduced by foreign currency translation.

A change in course?
However, with the global economy looking weaker, and the Federal Reserve back to being indecisive about raising lending rates in 2016 with U.S. GDP coming in at just 0.7% in Q4, the dollar could potentially head lower. We've already witnessed some substantial moves against a couple major currencies over the past week and change, but the most readily available example is the euro, which is at highs not seen since October 2015 versus the dollar. 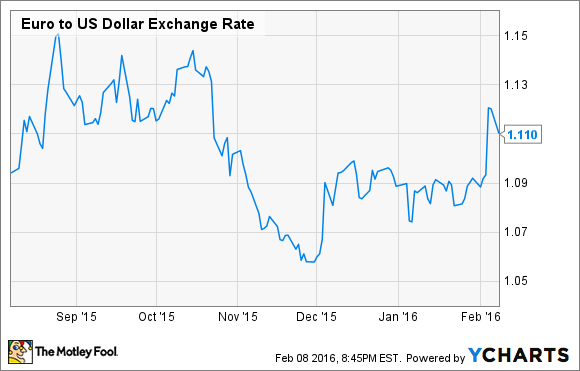 Again, the latest move doesn't signal an official change in trend, but a sustainably lower U.S. Dollar Index for multiple months at a time could cause U.S. multinationals, including companies like J&J, Pfizer, and Merck, to revise their sales and profit estimates higher. Upwardly revised estimates could be a nice way to pull these companies out of their recent "funk," for lack of a better word, and it could add some stability to an otherwise volatile market. In other words, if investors begin to see that big companies are taking charge and leading with upward revisions, it might put a solid foundation under all three indexes.

One thing to keep in mind
While a weaker dollar is bound to have America's biggest companies (and most investors) smiling, it's also important to take into account that currency moves are only one snippet of a very big picture. 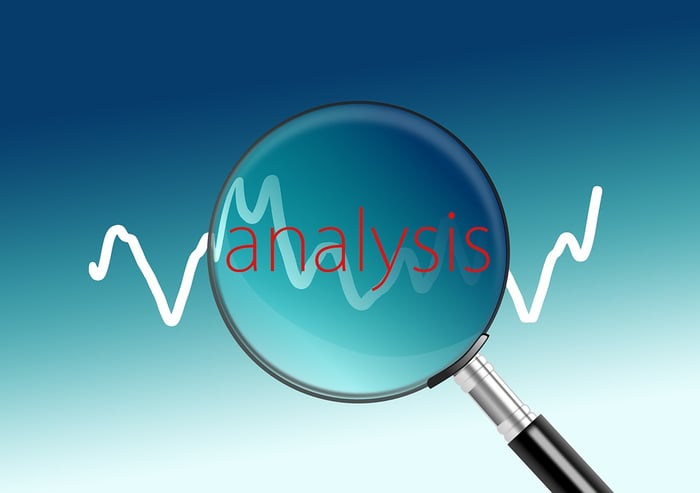 Ultimately, we care about the longevity of a company's business model, sans currency moves. Operational performance is really the best way to value a business since currency moves are typically beyond the control of corporations and investors. This means you as the investor digging into the internals well below the surface and understanding the real operational demand, margins, and profitability of a business.

This isn't to say that you need to completely ignore a weakening dollar, since it could be a temporary catalyst for stocks and a foundation for year-over-year revenue and profit growth. However, your sole decision to buy a stock should not be based on the expectation of an earnings revision due to a weaker dollar.

Nonetheless, I'd suggest keeping a close eye on the U.S. Dollar Index over the coming weeks/months as it could lead to a shift in where investors are parking their money.