Shares of Herbalife hit a 52-week low yesterday. Let's take a look at how it got there and whether cloudy skies are still in the forecast.

How it got here
Investors should take note to never attract the ire of sell-side investor David Einhorn. Despite a warning even from me that Herbalife's business model seemed overvalued, it was actually Einhorn's probing shortly after the company's first-quarter earnings report that has triggered a wave of short-selling and a mass exodus from the stock.

Herbalife's quarterly report was largely more of the same -- the stock beat by $0.07 and sales increased by 21% with the company raising its full-year EPS guidance in line with Wall Street's expectations. Where the wheels fell off the bus was when Einhorn questioned management regarding sales made outside of its network of nutrition partners. The company's response that it doesn't track non-network sales sent investors into an uproar, which has led to some pundits questioning the validity of Herbalife's operations.

Herbalife suffers from high distribution turnover rates. It's set up very similarly to most multilevel marketing companies in that sales representatives are hired and they in turn recruit their own representatives. Herbalife's business model has been found to be illegal in Belgium, according to a report by CNBC's Herb Greenberg. When Einhorn sounded the alarm regarding serious accounting question marks at Green Mountain Coffee Roasters and Lehman Brothers, the Street has no choice but to pay attention.

How it stacks up
Let's see how Herbalife stacks up next to its peers. 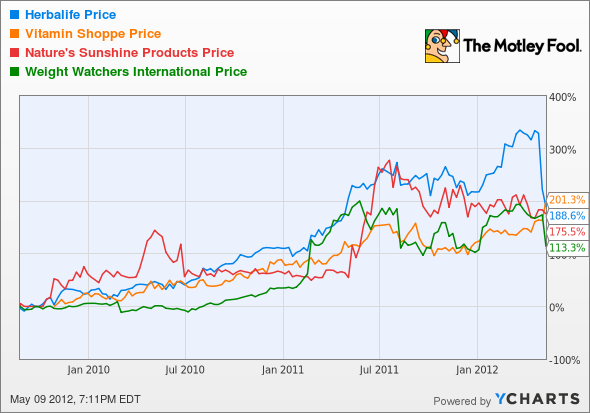 Despite their recent struggles, nutrition-oriented companies have been solid performers over the past five years.

I've not minced words in recent weeks that I'm not a fan of the diet/health fitness sector because of the low customer loyalty that permeates the sector. These figures here serve as even more evidence of this.

Weight Watchers International missed Wall Street's earnings estimates in the first quarter as increased marketing expenses weighed down its profits. Nature's Sunshine Products' valuation appears a little more reasonable, but considering that its sales were flat year over year in its latest quarter, do you really want to pay 59 times cash flow? Vitamin Shoppe is perhaps the only truly healthy company in this grouping after it reported 9.6% same-store sales growth in its latest quarter. Herbalife has done what it can to stop the onslaught, including purchasing $427.9 million worth of its own stock, but who knows how reliable these metrics are when David Einhorn is involved.

What's next
Now for the real question: What's next for Herbalife? That question really depends on whether it can clear its name in light of Einhorn's questions and whether it can find a way to lower its distribution turnover.

Our very own CAPS community gives the company a two-star rating (out of five), with 75.1% of members expecting it to outperform. In true contrarian fashion, I am one of those in the minority that has made a CAPScall of underperform on Herbalife and I am up nearly 29 points since that call.

I can't exactly say I told you so because no one outside of Einhorn appears to have seen the problems that are arising now, but I did indeed tell you that high levels of turnover and low customer loyalty in the weight loss/nutrition sector make it a very poor investment. With Einhorn's followers swarming the stock and short-interest rising, I don't see very much to be excited about. Herbalife was an expensive stock prior to this plunge, and it's still not cheap enough for me to merit closing my CAPScall.

If you'd like the inside scoop on three American companies that are looking like they're set to outperform, then look no further than these three picks by our analysts. Get your report for free by simply clicking here.

Craving more input on Herbalife? Start by adding it to your free and personalized watchlist. It's a free service from The Motley Fool to keep you up to date on the stocks you care about most.