Coming off of the long weekend, optimistic news from Greece trumped more depressing domestic economic signals. This helped boost the Dow Jones Industrial Average with a rally of about 1%, while the S&P 500 followed with a gain of 1.1%. Today, any news from Europe will continue to weigh on markets, while a few reports will help color the housing-market picture and select companies will report earnings.

The good and bad of yesterday
Markets welcomed Greek poll results for its June 17 election, which showed growing support for the New Democracy party, which advocates for following the already-laid European Union plans of austerity. However, the Syriza party, which advocates for abandoning the austerity measures, is right behind or tied with the New Democracy in the polls. Voters have plenty of time to change their views before the election, so expect more market reactions from future polls.

On the bear side, consumer confidence fell for the third month in a row, according to the Conference Board, which differs with the University of Michigan's reading of an improved consumer confidence level in May. Also, the Case-Shiller index, which measures housing prices in 20 cities, reflected a 2.6% drop for March on top of the 3.5% decline in February. Home prices in Atlanta led declines with a 17% drop over one year, while Phoenix posted the highest gain with a 6% improvement. The index is now back to levels last seen in late 2002: 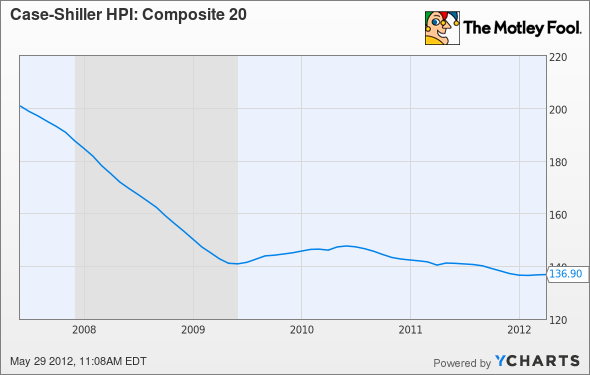 More housing news
Pending home sales for April will be released at 10 a.m. EDT, but the market only expects a modest rise of 0.6% for the index, which measures signed contracts for homes that have yet to be counted as sales. In March the index rose 4.1%, and it's now is at its highest level since April 2010. As the inventory of homes shrinks, homeowners hope that prices will end their slide, and builders hope for increased demand in newly constructed homes.

Skip the commercials
TiVo reports earnings after the market closes today, and Fool Rick Munarriz believes it will beat earnings again. TiVo beat analyst estimates for the past four quarters -- anywhere from 9% to 447% -- but some of these quarters were fueled by large settlements, like with DISH Network bout that brought in $500 million. While the company continues to lose subscriptions from direct sales, it has offset those losses through subscriptions from broadcasters like DIRECTV , which is TiVo's second-largest partner and a large provider of the 1.2 million partner subscriptions TiVo holds. If TiVo can show more growth, the market may reward it with a higher price-to-earnings ratio than its current ratio of 12.

The shows go on
Also reporting after the market closes, Lions Gate Entertainment hopes to beat analyst estimates of $0.25 earnings per share. The filmmaker rode The Hunger Games to new share-price highs in March, but it has since fallen more than 15%. Lions Gate is also looking to extend the Twilight series past what has been written in order to further turn the teenage vampire craze into cash.

In the long run
Every bit of news might nudge stocks up or down for a day, but that doesn't mean much for long-term investors looking to outperform the market. A solid company pays no attention to the everyday changes in share price, but instead looks for long-term value creation. To reveal three such solid stocks that will help you construct your retirement portfolio, along with the habits needed to build wealth far into the future, read our free report: "3 Stocks That Will Help You Retire Rich". Click here -- it's free!