As investors, we are often held hostage to the choices that company CEOs make. An acquisition can put a company in a new strategic position or, more often than not, leave investors with a bad return on investment. Stock options can influence the choices a CEO makes with cash on hand, because while buybacks are a notoriously bad use of shareholder capital, they hypothetically make the stock options CEOs hold more valuable.

Today I'll cover another factor that plays into a CEO's decision-making that may not be good for your stocks: kingdom building.

Bigger is always better... right?
Kingdom building seems like something that would happen centuries ago in ancient Rome or Greece rather than in corporate America, but the same greed and power that drove rulers of the past also drive CEOs today.

The concept of kingdom building is fairly simple. A company expands into as many markets as possible and grows the business as large as it can regardless of whether the added size really makes sense for the company's owners, or shareholders. This is usually done under the guise of something called "synergy."

Jamie Dimon, CEO of JPMorgan , has shown just what kingdom building is all about in his successful bid to make JPMorgan into the biggest entity he can. The $2 billion-plus in trading losses the company announced last month stem in part from JPMorgan's size and complexity, along with Dimon's apparent view that the bank needed to get bigger. Just because you're bigger doesn't mean you avoid the risks others have to deal with, and oftentimes the risk is more complex.

In a recent analysis, an analyst said that JPMorgan would be worth more if it split up into separate companies rather than staying the giant bank Jamie Dimon wants it to be. A smaller bank would likely avoid the major boondoggles that occurred recently and could focus more closely on the business at hand, but don't tell Wall Street that breaking up would be a good idea.

Time Warner tried its hand at kingdom building when it merged with AOL in 2000. It took activist investor Carl Icahn to make the company realize that an Internet company, a media company, and a cable company don't really make sense together. Today, AOL, Time Warner Cable, and Time Warner exist as three separate companies because the grouping didn't work. Did we learn anything? Comcast is trying the same thing with NBC Universal, so it appears that not everyone has learned the lesson.

Google and Microsoft are expanding their reaches so far that I think they're entering kingdom-building territory. Google purchased Motorola Mobility for $12.5 billion, adding hardware to its software kingdom. The progression from search to smartphone operating systems seemed a bit unnatural, but it's been a smashing success, so why not take it to the next level? The problem is that not only will this anger other smartphone makers, it continues to convolute Google's business, which is growing in size but still generates a vast majority of its revenue from a single product: search. When companies get as big as Google, they tend to stretch their businesses to grow.

Microsoft has made similar attempts to expand beyond its bread-and-butter operating system and office software, with little success. Search has been a distraction, Xbox is just a drop in the bucket despite being profitable, and mobile software has yet to take any meaningful share from its competitors.

Sometimes, companies need to expand in order to stay relevant. But most of the expansions of the kingdom have been terrible for investors.

Kingdom building as a way of survival
Companies also can feel forced to make dumb acquisitions because they feel their kingdom collapsing around them. Zynga recently bought the company that makes Draw Something for $180 million, a deal that kept Zynga's games relevant -- for the moment. But the fad that surrounded Draw Something in its early days and weeks is wearing off, just as Zynga tries to figure out ways to monetize the game. It looks like an attempt to add to its empire may actually be one of the things that brings the empire to its knees financially.

Coal companies have done this over the past year as well. As they've all fallen, they've consolidated in an effort to get bigger and stronger, thus far to little avail. Building a kingdom on the way down is no way to survive.

Even the best kingdoms must fall
My favorite kingdom of all time is a company many still regard as one of the great American companies built by one of the great CEOs of our time. The company is General Electric , and the CEO is none other than Jack Welch.

In fact, over the last 10 years, it hasn't made much sense to the market, either. Even before the financial crisis, GE was underperforming the market. After the crisis, its underperformance has gotten worse. 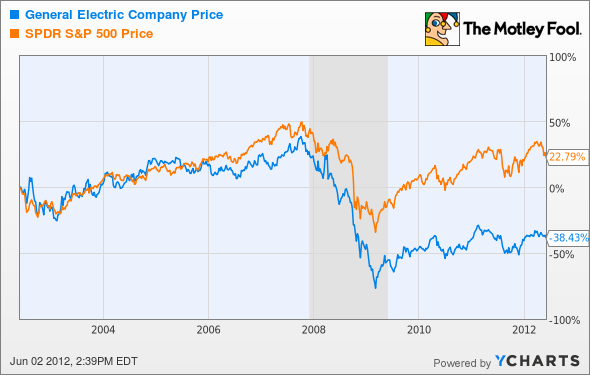 Beware of the kingdom
The early stages of kingdom building are fraught with butterflies and rainbows. Analysts see cost savings and synergies, and investors love the idea of a more diverse business, but over time it rarely works out well. Rome eventually expanded so far that the kingdom fell apart, and so did Time Warner, Motorola, and countless others. A decade from now we may be saying the same about GE, Google, Microsoft, and JPMorgan. Just beware that a larger kingdom doesn't necessarily mean a better kingdom.