Over the last three years Las Vegas Sands and Melco Crown have paced the growth of the gaming industry. New resorts in Macau and Singapore have helped grow revenue more than 100% over that time and both companies have turned dire situations at the height of the recession into wildly successful businesses. 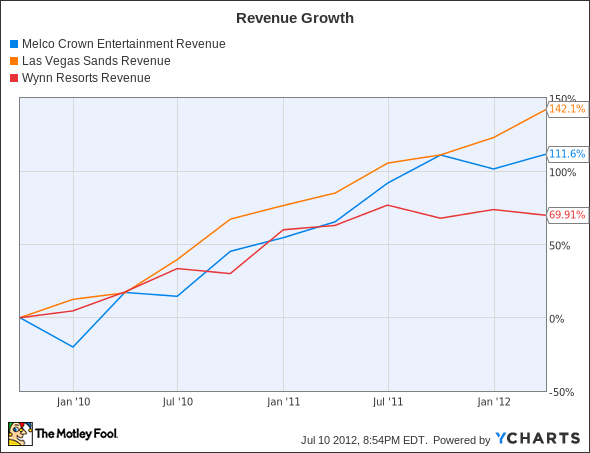 The question we ask today: Which stock will be a better investment for investors over the next three years?

You get what you pay for
Before we dive into advantages and disadvantages of each company, let's take a look at how the market values them. Using the enterprise value/EBITDA valuation method, you can see below that Melco Crown appears to be much less expensive than Las Vegas Sands currently.

The one thing that this trailing ratio does not consider is Las Vegas Sands' Sands Cotai Central, which is currently in the midst of a phase opening. If we project $1 billion in EBITDA for this property, similar to its neighbor The Venetian Macau, the ratio falls to a much closer 7.64. Based on this, it looks like the companies are fairly similarly valued when accounting for fully built-out resorts, with maybe a slight advantage going to Melco Crown before we know exactly how Cotai Central will perform.

Now that we understand where valuation lies, let's look at the advantages and disadvantages of each company.

Las Vegas Sands advantages
As the largest and most valuable company in gaming, Las Vegas Sands owns some of the best properties in the industry. Marina Bay Sands is the company's crown jewel that grew revenue 45.1% and EBITDA 66.1% in the first quarter. The resort could very easily pass $2 billion in EBITDA during 2012 alone.

Las Vegas Sands also owns three properties in the heart of Macau's Cotai Strip. We've seen gaming trending toward the Cotai Strip, which has benefited Las Vegas Sands and Melco, while taking growth away from Wynn Resorts and MGM Resorts in recent quarters. As Sands Cotai Central is completed, the trend toward Cotai will likely continue.

Sands also has the capability to build much larger resorts than Melco Crown, something it is looking to do in Spain. If markets like Japan or Spain indeed open up, Las Vegas Sands will have a clear advantage in these new markets.

Las Vegas Sands disadvantages
The biggest disadvantage for Las Vegas Sands in this battle is sheer size. Resorts that will add 20% or more to EBITDA are few and far between, and after Cotai Central the company just doesn't have growth prospects outside of organic growth right now. Lot 3 on Cotai is the company's only potential resort in the pipeline, and it looks like Galaxy and Wynn are jumping ahead of Sands in building their resorts on Cotai before Sands gets to Lot 3.

Investors should also be looking with a close eye at Singapore, where officials are trying to crack down on problem gambling and are looking to increase their ability to fine gaming operators for violations. The Casino Regulatory Authority in Singapore could get approval to fine companies 10% of annual gaming revenue for violating laws that limit who can be allowed to gamble, something Sands has been fined for before. If fines increase that much, you can bet the company will do everything it can to avoid any violations.

Really, there aren't any glaring red flags for Las Vegas Sands. The company has an outstanding lawsuit with a former executive, but it's unlikely to impact operations. The biggest question is how much the company can grow in coming years.

Melco Crown advantages
Melco Crown has two main advantages over Las Vegas Sands from an investor's standpoint. The company is smaller and therefore has more upside with the addition of another resort. It also has lower margins, which provide the company with significant operational upside.

The company's size means the $1 billion resort in the Philippines that the company just signed on as a partner has the potential to make a big impact on earnings. The company will invest up to $580 million in the project, and if the area's gaming revenue reaches $3.0 billion by 2015, as one analyst predicted, it will be a big move for the company. Melco also has a majority stake in Macau Studio City, although that projects sits in a similar position to Lot 3.

The margin upside Melco has is significant as well. In the most recent quarter, the company's EBITDA margin was 27.6% versus 36.5% at The Venetian Macau. Melco has steadily improved margins in the last two years and further improvement will go straight to the bottom line.

Melco is also dependent primarily on City of Dreams for its earnings. This has been good so far because the resort has performed well, but any decline in the Macau market would send Melco into a tailspin. Las Vegas Sands' more diverse operations should keep the company's profitability more stable and give investors a less volatile investment.

And the winner is...
The race between these two is tight, but the recent deal in the Philippines has pushed me over to the side of Melco Crown in recent days. The deal will give Melco another prospect for growth in a market that could actually take business from Singapore and Macau. The lower valuation is also a factor in my pick.

For more risk-averse investors, Las Vegas Sands would be a good pick. I'll keep outperform calls on both stocks right now though because I think gaming will continue to grow and both stocks provide nice value to investors.

While both of these stocks have been multibaggers in recent years, our analysts have found another stock that fits the mold. In our special free report entitled "Discover the Next Rule-Breaking Multibagger," they outline the pick and why it is breaking all the rules of its industry. Find out which stock this is today by clicking here.