At the beginning of 2012, I set out to form The World's Greatest Growth Portfolio. Though I can't promise it will always live up to its moniker, the portfolio has returned 22% in just 10 months, besting the S&P 500 by about nine percentage points.

Today, I'm going to take a deep dive into one of my core stocks -- Amazon (NASDAQ:AMZN). Read all the way to the end, and I'll offer up access to a special premium report that dives much deeper into Amazon than I can in just one article.

Back in May of this year, I called Amazon my highest conviction stock in the market. Today, that sentiment remains the same, for two main reasons.

First of all, over the years, Amazon has worked to expand its collection of fulfillment centers throughout the United States and the world. This may sound relatively simple, but it's crucially important. These centers are responsible for making sure everything you order on Amazon gets to your front door as soon as possible.

Because these centers are not cheap by any means, and because Amazon is continuing to build them out to allow for ever-faster delivery, the company is forming a competitive advantage around itself that is becoming more and more impenetrable.

Second of all, the company continues to innovate and invest in its future. Not only has Amazon cornered a large swath of e-commerce, but its Kindle was an innovative first mover, and the company already has its tentacles in movies, tablets, and cloud computing. It certainly has serious competition -- like Netflix (NASDAQ:NFLX) in the movie business; Google, Apple (NASDAQ:AAPL) and Microsoft (NASDAQ:MSFT) in tablets; and even smaller players, like Rackspace (NYSE:RAX), in cloud hosting. But it also has an impressive track record.

There's really no telling where the company will be 10 years from now but, with its innovation combined with a solid moat around its e-commerce business, there are lots of reasons to be optimistic.

But isn't it ridiculously expensive?
I'm not going to beat around the bush; by a lot of traditional metrics, the company is expensive. It trades for over 2,000 times earnings, and almost 14 times book value.

But these numbers are somewhat skewed by the fact that the company is investing so heavily in its future, and earnings are so minuscule right now that the P/E is bound to be sky-high. To get a different take on the situation, consider these two facts:

To many investors, it would seem alarming to see expenses grow faster than sales. But, take a closer look, and you see there's a good reason that expenses rose so much. If you break down what Amazon spends money on, this is what it looks like. 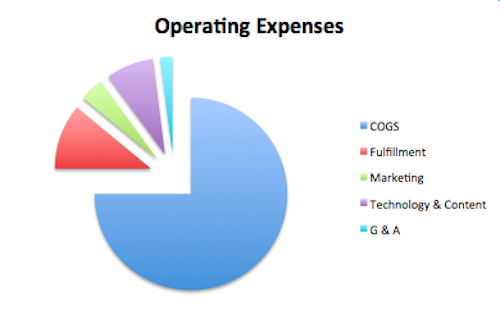 The moniker COGS represents the "cost of goods sold." In other words, when you buy a physical product from Amazon, this is how much Amazon had to spend on that product. As you can see, COGS represents 75% of all expenses. But, whereas sales have risen by almost 30% this year, COGS have gone up by only 27%. That might seem small, but it represents a significant gain for the company.

The reason the expenses rose by so much is because fulfillment expenses (those expensive centers), marketing, and technology and content (like movies and the next iteration of the Kindle) rose between 40% and 57%. These are projects that the company is putting money into now in order to be ahead of the game tomorrow.