At the beginning of 2012, I set out to form The World's Greatest Growth Portfolio. Though I can't promise it will always live up to its moniker, the portfolio has returned 23% in just 11 months, beating the S&P 500 by about 9 percentage points.

A few weeks ago, I outlined  exactly how I would go about building my portfolio for next year: Invest first and foremost in companies that demonstrate exceptional levels of innovation, with special emphasis given to those that I believe will be around decades from now.

Today, I'm going to review a company that's not only going to be taking a huge step up in my portfolio for 2013, but one that I think could easily be the market's best stock for 2013: Baidu (NASDAQ:BIDU)

Baidu, China's largest search engine, officially began doing business back in 1987, when Robin Li and Eric Xu founded the upstart company. Li is still on board and both the chairman and CEO of the company.

Li has clearly been guiding the company to an evermore-profitable future. Over the last three years, Baidu's operating performance has been nothing short of remarkable. Take a look at how the company has increased revenue, earnings, and free cash flow over that period.

If you're new to investing, you should know this: Demonstrating this kind of growth over three years is nothing short of amazing. One of the key reasons that Baidu has been able to continue this growth is because Chinese citizens are adopting the Internet in their everyday lives at a rapid pace.

Take a look at how Internet penetration has expanded in China over the same time frame. 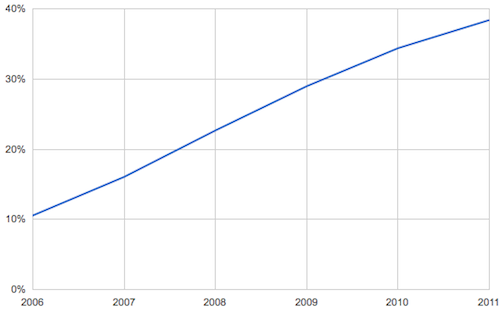 From 2006 to 2011, Internet penetration went from just 10.6% all the way to 38.4% -- almost quadrupling in size. If we were talking about the United States, which has a population of roughly 310 million, that would mean adding about 86 million Internet users.

But China's population is vastly larger than that of the United States. And assuming a stable population of 1.35 billion in China over the same time frame, the country added a whopping 375 million Internet users. That increase alone outweighs the entire population of America.

Now look at where Internet penetration rates in China sit compared to the United States. 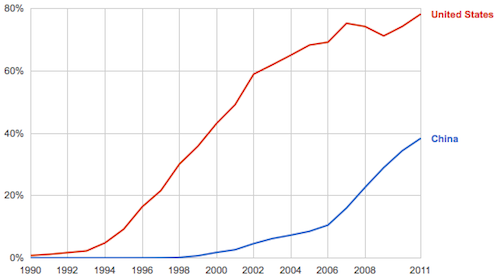 Currently, we're leveling off at about 80% Internet penetration. This means that there are roughly 250 million Internet users in America. And with a 67% market share in search in the United States, that means about 170 million Americans use Google (NASDAQ:GOOGL) on a regular basis for their search needs.

Let's assume that one day, Internet penetration in China also reaches 80%. That would mean roughly 1.1 billion Internet users would be in China. If Baidu maintains its astounding 80% share of the search market in China, that would mean about 880 million Chinese would use the company's service on a regular basis -- a number five times larger than Google's. 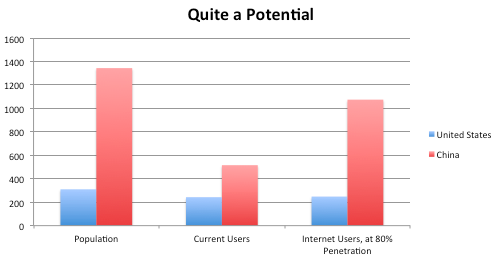 At a bargain price
Despite the encouraging trends, despite the management that's been at the helm from the beginning, and despite the history of excellent performance, Baidu seems to be priced at an absolute bargain right now. Let's look at how the company compares to Google -- its American counterpart -- on a few different metrics.

Don't get me wrong, I'm a huge fan of Google as well, but at 22 times earnings, investors are paying just as much for Baidu -- even though it has a much longer timeline until it reaches saturation -- than they are for Google.

There are a couple of reasons for the pessimism, but I'm not buying into most of the bear arguments. One is that upstart Qihoo 360 (NYSE:QIHU.DL) is taking away market share. That might be true, but with a growing pie (overall Chinese Internet users) and an 80% share of that pie, I'm not worried.

Another concern is that with more customers -- both in the United States and China -- using more mobile searches, companies like Baidu and Google won't be able to collect as much money from their ads. In response to this, I point to the fact that the companies have said mobile searches have been supplemental to -- not replacing -- more-profitable desktop searches.

The final concern, which just recently surfaced, is that the SEC is investigating the Chinese branches of the Big Four auditors for potential fraud. News of the move had shares of Baidu and other Chinese Internet companies like SINA (NASDAQ:SINA) and Sohu.com (NASDAQ:SOHU) reeling lately. I'll admit, if this turns out to be true, it would significantly change my outlook on Baidu -- and larger Chinese companies in general.

For the time being, though, I think Baidu is a fantastic buy. That's why I'll be giving it my highest allocation in 2013's growth portfolio, and why I think it deserves your attention.