Samsung's rise to the top of the global smartphone market has been nothing short of breathtaking. Over the past three years, the South Korean conglomerate has grown its share of the global smartphone market from just 4.3% in Q1 2010 to 29% in Q4 2012. Meanwhile, Apple (NASDAQ:AAPL) has seen its share increase from 15.7% to 21.8% over the same time. 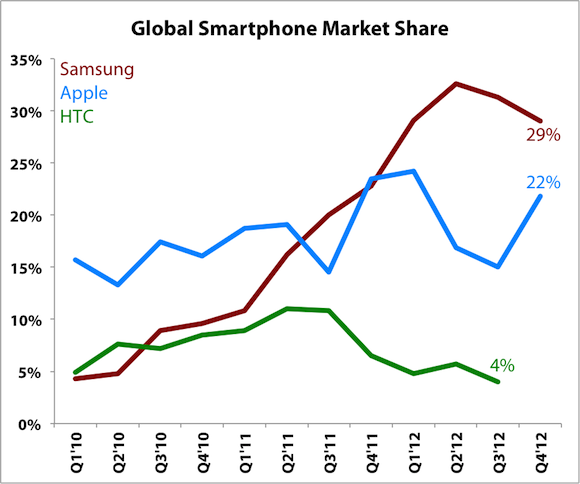 Source: IDC. HTC market share not publicly disclosed for Q4 2012 because it fell out of the Top 5.

Apple has plenty of lessons for investors regarding design, inventory management, and product strategy, among many others. It turns out Samsung has a lesson, too: Marketing works.

While Apple's focus has always been on product depth, releasing one iPhone model per year, Samsung's is the polar opposite; it releases dozens of new models each year. The company then focuses resources on the ones that begin to gain traction, putting its enormous marketing budget behind successful devices.

The importance of Samsung's marketing to its success is evidenced by its growing lead over HTC. Once upon a time, HTC was the champion of Google Android, with its global market share peaking at 11% in mid-2011. When the Taiwanese OEM's fortunes began to fade at the end of 2011, HTC quickly decided to heed an Apple lesson and focus its product strategy with its new One campaign.

HTC slimmed down its broad product line into three models within the One family: the X, V, and S. By most accounts, the One X was superior to the Galaxy S III in numerous ways, including overall build quality. Unfortunately for HTC, the One X did very little to turn its fortunes around. Instead, Samsung continued to rise, in large part due to its marketing budget, which totaled an incredible $11.9 billion last year (some of this is related to commissions, promotions, and rebates).

In January, HTC CEO Peter Chou told The Wall Street Journal, "Our competitors were too strong and very resourceful, pouring in lots of money into marketing. We haven't done enough on the marketing front." Chou has now hired a new marketing chief to help it improve in that department. The new chief certainly has some work to do, since some of HTC's recent ads have just been strange.

HTC just unveiled its new One smartphone, focusing resources even more than it did last year. That device is crafted out of an aluminum unibody casing and features an incredibly sharp display (468 pixels per inch) and a revamped software interface layer on top of Android. The Galaxy S IV is being unveiled tomorrow, but I'll wager that HTC will still have a better device from purely a product standpoint since Samsung remains committed to its cheap plastic ways.

The competition between Samsung and HTC shows that sheer marketing weight can at times overshadow actual product quality. The One may be HTC's last shot at redemption, but it needs to market the device well.

Domestic dollars
Within the U.S., Samsung's marketing spending absolutely soared in 2012. According to The Wall Street Journal, the South Korean company boosted marketing fivefold from 2011 levels.

The figures show a big drop in HTC's spending, further proof of its marketing missteps. Both BlackBerry and Nokia are mounting turnarounds this year and as such should be trying to build brands, but they also don't have as deep of pockets as Apple and Samsung.

BlackBerry recently changed its name from Research In Motion as a symbolic move to unify its brand under the BlackBerry umbrella. Nokia's Lumias are starting to take off, and Microsoft inevitably helps the company out through advertising its Windows Phone platform. Advertising was also part of the major strategic partnership that Microkia formed in 2011.

Samsung's willingness to spend on marketing has played a crucial role in its success. The company reportedly spends more on "below-the-line" marketing (things like the aforementioned commissions, promotions, and rebates) than any other smartphone vendor.

In the words of former Apple ad man Ken Segall, who thinks Samsung has pulled ahead of Apple in marketing prowess, "In marketing, as in political advertising, the bigger the budget, the bigger the chance of success."