Of all the criticisms that Apple (NASDAQ:AAPL) has endured in recent months along with its massive 40% pullback, there's one in particular that is actually quite legitimate: Apple's marketing has been rather ho-hum of late.

This is only relevant because Apple is a company known for consistently coming up with iconic marketing campaigns that have withstood the test of time. There was the famous 1984 Super Bowl ad that introduced the first Mac, the Think Different campaign that played a large role in rebuilding Apple's brand when Steve Jobs returned, the iPod silhouette ads that musical artists would do for free just to get exposure (and iTunes sales), or the I'm a Mac commercials that effectively prodded at Microsoft PCs.

Over the years, one man in particular played an instrumental role in helping come up with several of those campaigns: Ken Segall. He worked with Steve Jobs for over a decade at both NeXT and Apple as a creative director at ad agency TBWA\Chiat\Day. He was also the guy that literally put the "i" in "iMac" after Jobs initially wanted to name the all-in-one desktop "MacMan." He even wrote a book about his experiences, Insanely Simple, that gives a glimpse into the creative marketing forces in Cupertino.

While many can argue (and I would agree) that Steve Jobs had instilled product creativity and innovation deep within Apple's culture -- and as such the implications of his passing on Apple's product pipeline are less catastrophic than bears would believe -- Jobs was also very active in Apple's marketing and in this regard his absence in that process is coming to a head.

Hey, big South Korean spender
In a recent post on his blog, Segall makes the case that Apple may have lost its touch with its marketing recently. The ad man thinks that Apple's "momentum has been lost" when it comes to creating inspiring ads. To make matters worse, Segall thinks that archrival Samsung has "made remarkable inroads in a very short time" in building its brand for two specific reasons.

The first is simply that Samsung is spending an incredible amount of money on marketing. Last year, Samsung spent $11.9 billion on marketing expenses, and Asymco's Horace Dediu notes that the vast majority of that goes toward building its Galaxy brand, since its other divisions like semiconductors, LCD panels, washing machines, and baby monitors don't require much advertising. That's an insane amount of money for marketing.

To put that figure into perspective, the amount of money that Samsung spent in one year is over four and a half times what Apple has spent in advertising over the past three fiscal years combined. 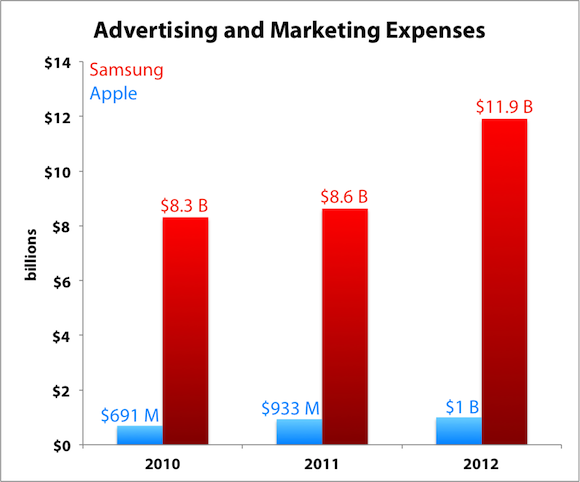 Samsung has also had ad success with people-centric ads, while Apple has fallen back on its product-as-hero strategy. The South Korean rival has been able to exploit and magnify "growing negative perceptions" about Apple, such as poking at iPhone launch lines or Apple's patent infringement suit against it.

Where's Schiller when you need him?
As Samsung has now pulled ahead of Apple in the global smartphone war by tapping lower ends of the market and hopes to do the same in tablets this year, there's a lot at stake. Due to the creative intensity of marketing, the loss of Steve Jobs seems to be weighing more on Apple's ad capabilities than it is on the company's ability to create incredible products. It makes me wonder what marketing chief Phil Schiller has been doing all this years, since presumably he's now the one in charge of Apple's marketing campaigns instead of Jobs.

Segall thinks that Apple needs to "recalibrate" its marketing strategies in order to strengthen its messaging and branding among consumers. Segall is absolutely right.