After flaunting some of the most impressive capital ratios in last week's Dodd-Frank stress test results, BB&T (NYSE:TFC) shareholders were stunned to discover that the Federal Reserve "objected" to certain parts of the bank's capital plan.

Thursday evening, the Federal Reserve released the second part of the annual banking stress test results, which examined the largest U.S. banks' ability to make capital distributions and maintain certain capital levels during an economic downturn. Although the Fed did not object to the Winston Salem, NC-based bank's continuation of its increased dividend from the first quarter of 2013, the bank recently disclosed that it re-evaluated its process related to calculating risk-weighted assets because of regulatory guidance. The change in methodology was not reflected in the Fed's numbers, prompting the objection and necessary revision.

Should we speak up?
CEO Kelly King has already issued a statement reiterating BB&T's financial strength and commitment to returning capital to shareholders. Although King and his management team have carried a solid reputation during recent years, investors may begin to question the company's handling of the situation. Despite announcing the RWA calculation change prior to the release of the Dodd-Frank stress test results, in its own press release on the same day, BB&T did not highlight the increased probability of receiving an "objection" during the Fed's Comprehensive Capital Analysis and Review (CCAR). While it may be likely that BB&T did not have any knowledge that would lead it to believe the change would result in an "objection," investors may wonder if management should have been more proactive in highlighting the change and its potential impact. 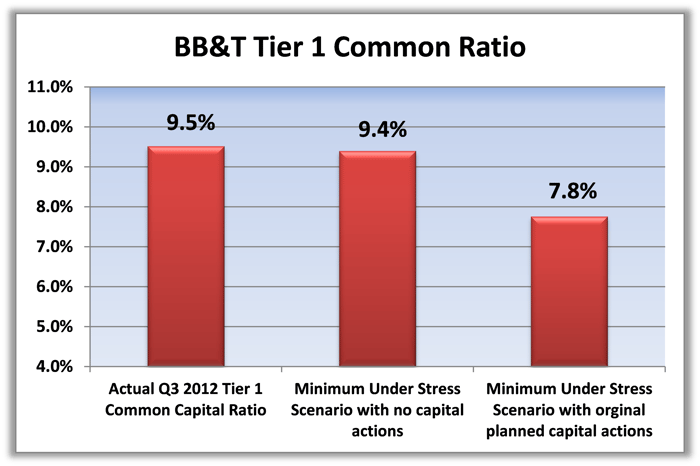