Please ensure Javascript is enabled for purposes of website accessibility
Log In Help Join The Motley Fool
Free Article Join Over 1 Million Premium Members And Get More In-Depth Stock Guidance and Research
By Adam Levine-Weinberg - Apr 4, 2013 at 10:40AM

Airline stocks significantly outperformed the market in the first quarter of 2013. However, three of the biggest U.S. carriers have released discouraging reports in the last week. Does this mean the party's over for airline investors?

After finishing 2012 with a strong December, airline stocks went on a tear in the first quarter of 2013. Of the five largest U.S. carriers (excluding American Airlines, which is in bankruptcy), the worst performer was JetBlue (JBLU 1.92%), which still gained a solid 17% for the quarter, outperforming the S&P 500 by nearly 10%. 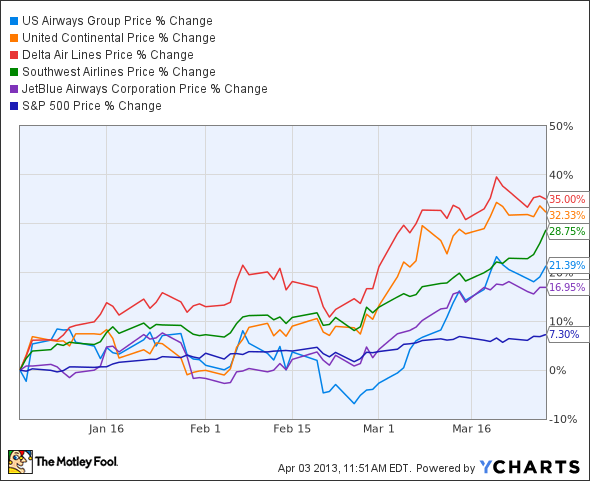 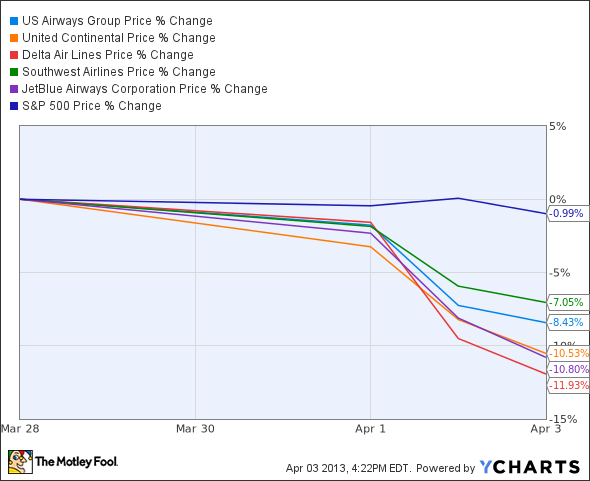 This quick reversal implies that we have probably reached the end of the airline rally. However, that does not mean that long-term investors should necessarily avoid the sector altogether. If you pick your spots carefully, you should still be able to earn some nice returns in airline stocks.

The rally
Last quarter's massive airline rally was primarily driven by speculation about a potential merger between American Airlines and US Airways (NYSE: LCC), followed by enthusiasm about the potential benefits for the industry, after the merger agreement was announced. Moderating oil prices also helped give airline stocks a boost. It seemed to me that the merger's potential benefits were already priced in by the time the agreement was announced in mid-February, but investors continued to push airline stocks higher. Most notably, Jim Cramer came out as bullish on US Airways in early March, reversing a long-held aversion to airline stocks.

The main rationale for buying airline stocks based on the American-US Airways merger was the idea that consolidation would lead to capacity discipline, boosting pricing power. Continued unit revenue gains at the major airlines in January and February added to this hope. However, consolidation is not particularly new for the airline industry. In the past five years, Delta Air Lines (DAL 0.18%) merged with Northwest, United and Continental merged to form United Continental (UAL -0.13%), and Southwest Airlines (LUV -0.92%) purchased AirTran. Most of the benefits of tamer -- not to mention saner -- competition have already been achieved.

The reality check
In the past week, airline investors have faced a major reality check. First, United Continental (UAL -0.13%)published an investor update before the long weekend in which it announced that non-fuel unit costs would increase by 11.4%-12.4% in the first quarter, far worse than its original projection of an 8%-9% increase. As a result, various analysts cut their Q1 estimates for United, anticipating an even larger loss than previously expected. Nevertheless, analysts were encouraged to see that United expects unit revenue to increase 5.4%-6.4% for the full quarter (implying a gain of roughly 7% in March).

However, if United's report led investors to believe that the revenue environment is strong, Delta and US Airways proceeded to dump cold water on that notion. On Tuesday, Delta reported unit revenue growth of just 2% in March, which missed the company's previous guidance and analyst expectations. Delta blamed the shortfall on lower demand for last-minute tickets caused by the sequester, along with some pricing missteps. On Wednesday, US Airways reported unit revenue that was flat year over year, which also missing its own guidance and analyst expectations. Like Delta, US Airways blamed its revenue shortfall on lower last-minute bookings caused by the sequester.

What to do?
Airline investors have thus seen each of the three network carriers (excluding American) report disappointing cost or revenue performance in the past week. The Delta and US Airways updates are particularly troubling because airline management teams had appeared very confident about demand trends previously. Now investors have to be concerned that tax increases and cuts to government spending will undermine the recent unit revenue growth trend.

However, some airlines are more "at-risk" than others. I continue to expect United Continental and US Airways to underperform the industry. United stock is expensive compared to peers, trading at 18 times trailing earnings. On the positive side, analysts currently expect United's EPS to more than double in 2013. However, the company has projected 5.5%-6.5% growth in non-fuel unit costs for the year, meaning that United will need healthy unit revenue growth to meet those analyst targets. If the airline revenue climate continues to weaken, United could be in for a rough year.

US Airways also seems like a risky stock to own for two major reasons. First, the company has posted unit revenue growth figures at or near the bottom of the airline industry throughout the first quarter. Second, US Airways is about to merge with American Airlines. The recent history of airline mergers strongly suggests that earnings performance could suffer during the merger integration process, which could lead to turbulence for shareholders.

By contrast, Delta seems like the safest investment among the "network" airlines. While it missed its revenue guidance last month, costs were lower than expected, which allowed Delta to maintain its profit estimate. Moreover, the company trades at less than eight times trailing EPS, so investors do not need heroic earnings growth to justify the current price. In fact, Delta's recent cost-cutting campaign and other initiatives should allow the company to post solid earnings growth in 2013 even if unit revenue gains are minimal. Southwest and JetBlue could also outperform going forward. A soft revenue environment may benefit the low-cost carriers as they can target corporate customers who would normally fly business class on the network carriers but need to cut travel costs. Southwest and JetBlue are also better positioned than the network carriers because they rely more on leisure travel, which tends to be less affected by economic weakness than business travel.

Conclusion
Airlines have been flying high for the past few months, but expectations eventually began to outpace reality. After this week's correction, long-term investors who want some exposure to the airline sector can buy in at a better price. Among the five biggest carriers in the U.S., Delta is probably the best investment due to its strong profitability and ongoing cost-cutting campaign. United and US Airways face more challenging outlooks, due to the former's significant cost pressures and the latter's upcoming merger. This makes them unattractive investments at this point.