United Continental announced Thursday after the market closed that Q1 and full-year non-fuel unit costs would rise more than previously expected. The continuing cost pressure at United will make it very difficult for the company to meet analyst profit estimates this year.

Last Thursday afternoon, United Continental (NYSE: UAL) provided an investor update that significantly revised the company's cost guidance for Q1, which ended last weekend. In January, the company had provided initial guidance for non-fuel unit costs to rise by 8%-9% year over year in the first quarter. At the time, the company attributed the rapid rise in costs primarily to the signing of new labor agreements that gave many United employees their first pay raises in many years. However, United stated in Thursday's investor update that it now expects non-fuel unit costs to be up by a whopping 11.4%-12.4% for the quarter.

What does it mean?
United's cost guidance revision is a nasty surprise for investors, who have been pouring into United Continental stock in the past few months. United posted slightly better than projected revenue growth in January, and then achieved industry-leading unit revenue growth in February. As I noted last month, United's February performance was helped by very easy comparable figures from 2012, but it still gave shareholders hope that the company had finally turned a corner. These positive revenue results, along with general industry optimism, allowed United to achieve its best quarterly stock performance in years over the past three months. 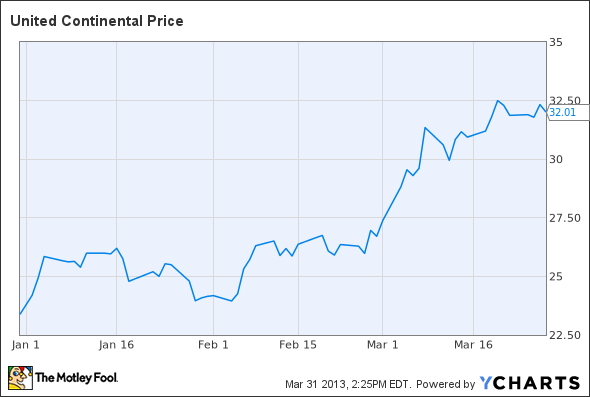 However, from an earnings perspective, the severe cost increases that United is experiencing outweigh the company's positive revenue momentum. On average, analysts currently expect United to lose $0.85 per share in Q1. Based on the company's updated revenue and cost guidance, it is almost certain that the company will miss that earnings target. If all of the revenue and cost figures hit the most favorable numbers consistent with the new guidance, United Continental will lose $0.90 per share in the quarter. On the other hand, at the unfavorable end of guidance, United could lose as much as $1.52 per share.

While cost increases will moderate somewhat later this year, management still expects non-fuel unit costs to increase by a relatively steep 5.5%-6.5% for the full year. On the plus side, fuel costs have moderated over the past two months and are currently projected at approximately $3.11 per gallon for the remainder of the year. If fuel costs remain at today's levels, then lower fuel expense could offset as much as half of the increase in non-fuel costs. However, I think that fuel costs will have to fall even further for United to meet the average analyst estimate for EPS of $3.75 this year, or more than double the company's 2012 earnings.

Conclusion
It was probably not a coincidence that United's bad news hit after the market had closed for a long weekend, when it would make the smallest impression on observers. However, investors should view this guidance revision as a sign to stay away. While the recent drop in fuel prices will help offset United's non-fuel unit cost increases, United ultimately has no control over this factor, and competitors benefit just as much from lower fuel costs.

Delta Air Lines (NYSE: DAL), has also seen significant non-fuel unit cost increases for the past year or two, but these are finally tailing off thanks to the company's ongoing structural cost reduction program. Moreover, Delta has consistently been able to offset cost increases with revenue gains during that time period. Surprisingly, Delta still trades at a lower earnings multiple than United, making it a much better investment opportunity in the airline sector at this time.