Shares of Huntington Bancshares (NASDAQ:HBAN) have been on a tear of late. Since the beginning of last year, they're up nearly 37%, outperforming the S&P 500 by roughly eight percentage points and ascending recently to a new 52-week high. As I write, they're trading for the highest price since the financial crisis took its toll on the bank. For current or prospective investors in Huntington, in turn, this performance begs the question: What's left for its shares going forward? 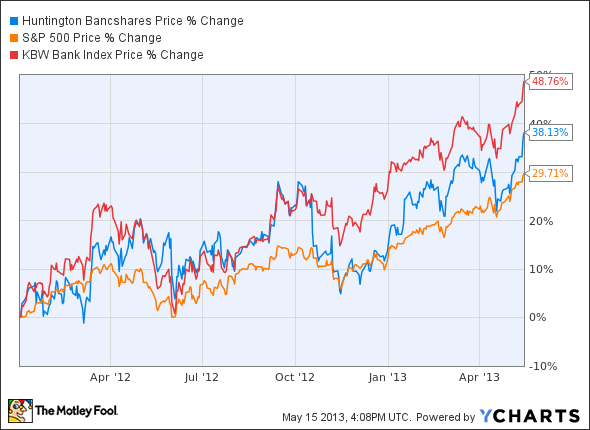 While it's impossible to predict the future, what can be said is that Huntington's valuation leaves room for further gains. Trading at 1.25 times its tangible book value, the bank is by no means cheap -- a common saying in the industry is to "buy at half of book value and sell at two times book value." At the same time, it's far from expensive. Take U.S. Bancorp, the nation's largest regional bank, as a counterpoint. Its shares trade for 2.54 times tangible book value. Or even BB&T, a regional bank operating primarily throughout the mid-Atlantic region. It changes hands at 1.86 times tangible book.

Another way to look at this is to compare Huntington's performance over this time period to the performance of its competitors. Overall, to refer back to the chart above, while Huntington has certainly done well for its shareholders of late, it's nevertheless underperformed the KBW Bank Index (DJINDICES:^BKX). The index, which tracks 24 of the nation's largest banks, has gained an impressive 48% over the past 16 months. That's more than 10 percentage points better than Huntington. There's an argument, in other words, that shares of the Ohio-based bank still have room to run.

With this in mind, it's critical for current and prospective shareholders to keep an eye on Huntington's fundamentals. On one hand, in the most recent quarter, the bank reported an 11% increase in its tangible book value per common share. In addition, it's setting aside less money for souring loans. But on the other hand, both its net income and revenue fell on a year-over-year basis. It goes without saying, in turn, that it's the latter issues investors should watch particularly closely.