2 bailout babies mature
Call it a comeback! After yesterday's market close, S&P Dow Jones Indices announced that it will add automaker
General Motors (NYSE:GM) to the S&P 500 and the megacap S&P 100 index after Thursday's close. GM will replace H.J. Heinz, which is being acquired by a group that includes Berkshire Hathaway. The index provider will also add another bailout stock, insurer AIG (NYSE:AIG), to the S&P 100. This is a big deal, particularly for GM -- $1.3 trillion in assets are indexed on the S&P 500. Little wonder the stock is up 1.8% this morning.

While AIG's shares traded on the New York Stock Exchange throughout the crisis, GM's were de-listed after the company declared bankruptcy in June 2009. In November 2010, the company offered new shares to the public in one of the largest IPOs in U.S. history. However, the stock is roughly flat since then -- in a roaring bull market: 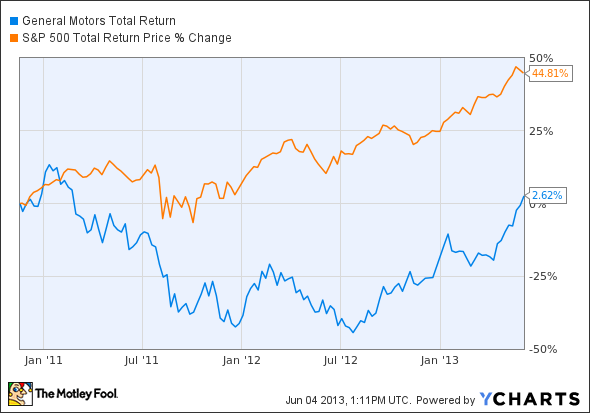 Worse yet, investors have had to endure substantial downside swings without the sort of upside compensation that AIG shareholders have enjoyed. Indeed, AIG, has absolutely demolished the S&P 500 since the latter put in its low on March 9, 2009: 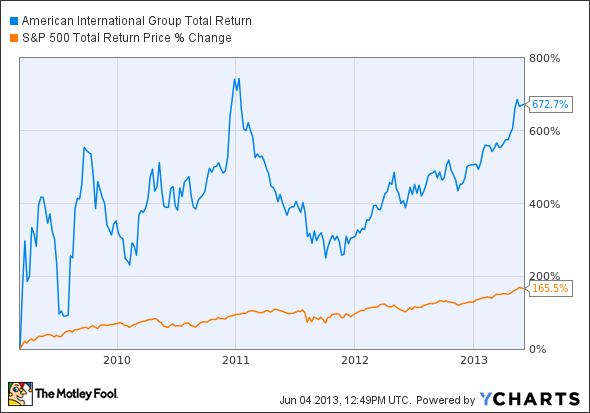 Still, reaping that return would have required nerves of tempered steel, as the shares produced stomach-churning volatility: During that period, the stock suffered a peak-to-trough loss exceeding 50% three times!

That's the past; what of the future? Neither GM nor AIG is an outstanding business, but they do have a franchise. Valued at 10 times the next 12 months' estimated earnings per share versus AIG's 12.5 times, GM now looks the better-positioned stock to deliver market-beating returns.