Head gold bug John Paulson must also be scratching his head after watching his gold fund -- which consists mostly of his own money -- fall 65% so far this year. The gold thesis is falling apart, and traditional stocks are now outperforming the long-term performance of gold, even after the precious metal's run-up.

Who needs gold, anyway?
Few average investors were loading up on gold at $300 per ounce during a brief window when you could have outperformed the stock market over a 10-year period. It wasn't until the financial crisis that gold became a hot commodity, and those who bought gold then haven't done well. 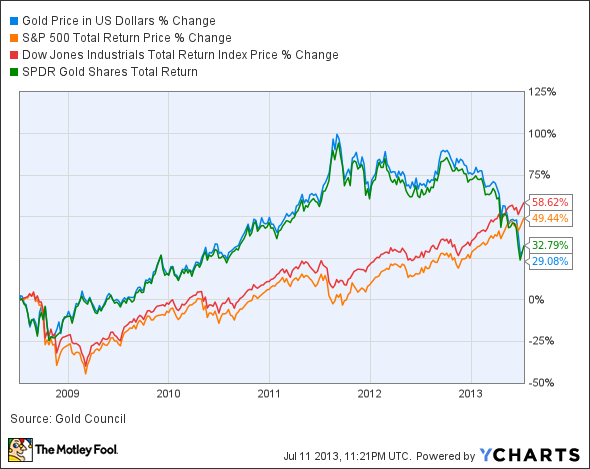 Both the S&P 500 (SNPINDEX:^GSPC) and the Dow Jones Industrial Average (DJINDICES:^DJI) are outperforming the spot price of gold and the highly popular SPDR Gold Shares (NYSEMKT:GLD), in which Paulson has a huge stake.

The gold trade unravels
There are two big reasons gold has fallen this year. First, the inflation that was predicted because of the Federal Reserve's money-printing and the U.S. government's massive deficits has failed to materialize. If it had, gold would have been a hedge against inflation, or so the story goes. The second problem is that interest rates are rising and the economy is improving, so investors are rotating out of gold and bonds and into stocks.

Basically, gold is a tool investors use to hedge against doom and gloom. In 2008 and 2009 -- when the economy was terrible, the deficit was growing, and inflation looked like a sure thing -- gold was the investment of choice. Today, all three issues look like they're improving, and inflation may actually be too low. The gold thesis is unraveling before our eyes.

Stocks win in the long term
Long-term investors should focus on investments that generate earnings and cash over a long period of time. Gold is a great trade if you can time it right, but it has never outperformed stocks in the long run, and that won't change in the future.