After placing a big bet on airlines' demand for fuel-sipping planes, Boeing (NYSE:BA) has had trouble executing on its vision. The 787 Dreamliner was designed to consume 20% less fuel than similarly sized planes, while offering extra range to support longer routes. Yet the company delivered the first Dreamliner three years behind schedule due to difficulties with development and organizing a global supply chain.

However, once the Dreamliner successfully entered service in late 2011, most investors thought Boeing was in the clear. While some airlines complained about the delays, most were just glad to get their hands on this revolutionary plane. After a long period of underperformance, Boeing stock has beaten the market handily since the Dreamliner was introduced in September 2011. 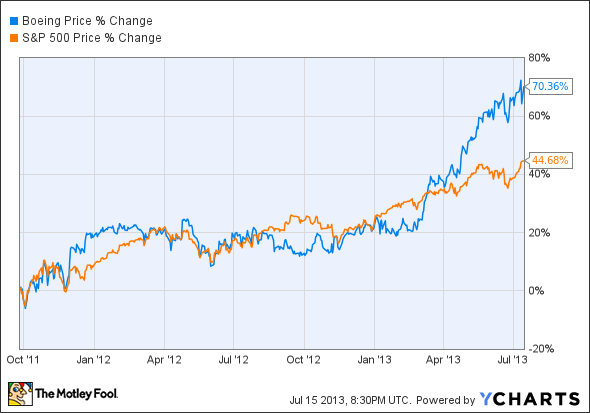 However, quality issues are starting to seriously threaten Boeing's reputation. There have been multiple unexplained fires on board Dreamliners this year, including one just last week. While regulators have had a measured reaction to the most recent Dreamliner fire, the model's poor track record is becoming a cause for concern. With top rival Airbus soon releasing its own new fuel-efficient widebody -- the A350 -- Boeing needs to repair its reputation for reliability right away.

Fire on board
In January, two different Dreamliner aircraft experienced fire-related incidents. On Jan. 7, a Japan Airlines airplane caught fire while sitting empty on the tarmac at Logan Airport in Boston. Then, on Jan. 16, people on board an ANA flight in Japan caught the smell of smoke, forcing an emergency landing. In both cases, the problems were traced to the Dreamliner's advanced lithium-ion batteries, but the exact cause of the malfunctions could not be determined.

As a result of these safety issues, regulators grounded the 787 worldwide for four months in order to investigate the incidents and ensure that they would not recur. Boeing ultimately had to redesign the battery compartment in a number of ways. However, while having the plane out of commission for months was a big inconvenience, most of Boeing's 787 customers were not too concerned. For example, United Continental (NASDAQ:UAL) CEO Jeff Smisek extolled the 787's virtues on the day the plane reentered service in May.

Deja vu
On Friday, Boeing and its customers experienced a deja vu moment. An Ethiopian Airlines plane mysteriously caught fire while parked in a remote area at London's Heathrow Airport. Shortly thereafter, a Dreamliner operated by Thomson Airways and bound for Florida was forced to return to Manchester Airport due to "a technical issue".

The Thomson Airways incident appeared to be a relatively routine precautionary diversion, and was unsettling primarily because of the coincidence that it came on the same day as the Ethiopian Airlines fire. By contrast, the fire is of more concern for Boeing investors and customers like United.

First, while the fire appears to be unrelated to the previous battery issue, it points to the risks of using an aircraft that relies on so many new technologies. Second, the fire caused a considerable amount of damage to the plane. If similar incidents continue to occur, airlines could easily be scared off both by the potential cost of having an aircraft out of service and the cost of repairs.

Third, the occurrence of so many separate incidents casts doubt on the thoroughness of Boeing's quality control process. This could cause more cautious fliers to avoid booking flights on Dreamliners, which would obviously hurt operators like United.

What now?
I still think that Boeing will recover from its Dreamliner woes and make this aircraft one of the staples of future international travel. The Dreamliner's more comfortable cabin and superior fuel efficiency are two major advances compared to previous generation aircraft. Moreover, Boeing's strong order backlog mitigates the risk of demand drying up.

However, last week's fire incident was definitely troubling. With Boeing stock trading for around 15 times forward earnings, much of the upside from the Dreamliner is already reflected in the stock price. While Boeing will probably overcome this latest setback, investors should still be cautious about this stock in light of the potential risks.