Boeing stock has recently reached multiyear highs in spite of the 787's grounding. However, a strong order backlog and long-term growth in the market could continue to boost this stock.

While aerospace giant Boeing (BA 3.52%) has been under fire for several months for the grounding of its long-awaited 787 Dreamliner, the company's long-term future looks quite bright. Its stock stands a chance of outperforming the market because the company has a staggering amount of future revenue already locked in through order commitments. The massive backlog for its popular 737, 777, and 787 airplanes is allowing Boeing to steadily ramp up production. Over time, this will boost revenue and margins, leading to higher earnings. This clear road map to higher future profits is perhaps the best reason for owning this stock today.

Orders piling up
Boeing delivered 601 commercial airplanes in 2012, up strongly from 477 in 2011. Despite this growth in deliveries, its backlog grew significantly, as airlines and air leasing companies ordered 1,203 planes from Boeing during the year. The majority of these orders were for the upcoming 737 MAX, a re-engined version of the best-selling Boeing 737 that promises to be more fuel-efficient. In total, Boeing had a backlog of nearly 4,400 airplanes by the end of 2012, worth $319 billion. That's seven years' worth of production already under contract. The strong demand for Boeing's planes has helped its stock hit a multiyear high this month. 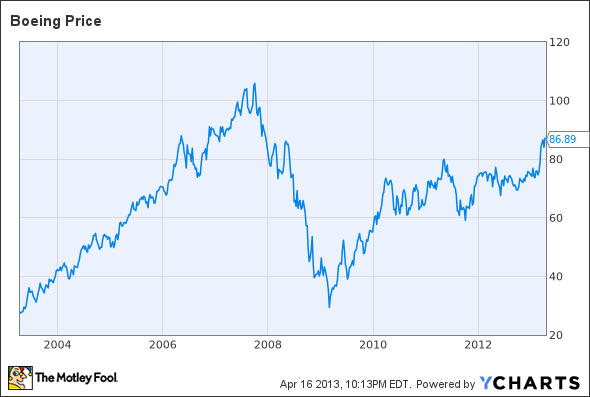 Right now, the biggest problem confronting Boeing (and Boeing stock) is the grounding of the 787 Dreamliner, caused by faulty batteries which caught fire in two separate incidents earlier this year. However, the company has already developed and tested a fix, which just needs to be approved by regulators. United Continental, the only U.S.-based Dreamliner operator, added the 787 back to its schedule beginning on May 31. This suggests that the company's management feels relatively confident that regulators will approve the solution soon and that modifications will be relatively simple.

Ramping production
Once Boeing surmounts the 787 battery issue, the next big challenge is to ramp up production. Its order backlog is a big asset. Regional jet maker Embraer recently had to cut production because it has nearly run through its order backlog. That said, Boeing has already filled most of its production slots through the end of the decade, which could make it hard to win additional orders. Most companies in the market for new airplanes don't want to wait until 2020 to start receiving them! For Boeing stock to move significantly higher, the company will need to increase production in line with demand.

Fortunately, Boeing is already in the process of ramping up production of the 737, 777, and 787 jets. 777 production was recently increased to 8.3 per month -- approximately 100 per year. 737 production, currently at a rate of 35 per month, will rise to 42 per month by next year. Most importantly, Boeing plans to double the 787 production rate this year from five per month to 10. Including the slower-selling 747 and 767 models, these production increases should allow Boeing to deliver roughly 750 commercial airplanes per year by mid-decade.

That's not all
I think demand could probably support further production increases at Boeing as the decade progresses. Once Boeing works through some of the 737 and 787 order backlog, it will have a better chance of winning future orders. Furthermore, the company is likely to introduce a bigger version of the 787 or an updated 777 by the end of this year, which would presumably lead to new orders.

There is tremendous replacement demand today for the many jets that entered service in the late 1970s and early 1980s and are now nearing the ends of their useful lives. These include the MD-80, Airbus A320, Boeing 737 Classic, Boeing 757, and Boeing 767 families. At the same time, the rapid growth of aviation in developing countries is stimulating demand for more airplanes. Boeing estimates total demand over the next two decades at approximately 34,000 airplanes, worth more than $4 trillion.

Foolish conclusion
While Boeing stock has recently hit multiyear highs, there could be more growth ahead once the company gets its signature 787 Dreamliner back in the air. Commercial airplane deliveries should grow from 601 last year to around 750 by 2015, with further growth possible, depending on how much of the market Boeing can grab. Based on the company's strong market position and popular products, the stock looks like a good long-term investment candidate.