These losses come despite the fact that July retail sales excluding cars, gasoline, and building materials grew at the fastest rate in seven months, according to the Department of Commerce. This indicator is one of the critical inputs in consumer spending, which, is the engine of the economy.

The latest data suggests that consumer confidence is improving, which is certainly an important ingredient in the economic recovery. Will confidence be the key to the next leg of the stock market rally? In this morning's Financial Times, James Paulsen of Wells Capital Management argues that "investors need not be overly concerned about slower earnings growth," because "the primary force driving the stock market is not earnings performance, low yields or quantitative easing; rather, it is a slow but steady revival in confidence, a trend that is just beginning."

Comparing the present to 1952 and 1982, Mr. Paulsen suggests that we are entering the second phase of a three-phase bull-market cycle in which "earnings performance flattens while the stock market surges (the valuation cycle)."

Alas, the comparison immediately collapses when one actually takes a look at valuations. On Dec. 31, 1951, the S&P 500 was valued at less than 10 times trailing earnings per share. On the eve of 1982, it was even cheaper at just eight times trailing earnings. Today, the equivalent multiple is above 18 (the gap in valuations is even wider when one looks at the cyclically adjusted price-to-earnings ratio). On that basis, the "valuation cycle" is not beginning; it is already well underway.

Indeed, the following graph, which displays the performance of the S&P 500 (blue line) relative to the growth in trailing-12-month GAAP earnings (orange line) over the past two years, is characteristic of Mr. Paulsen's second phase, in which "earnings performance flattens while the stock market surges": 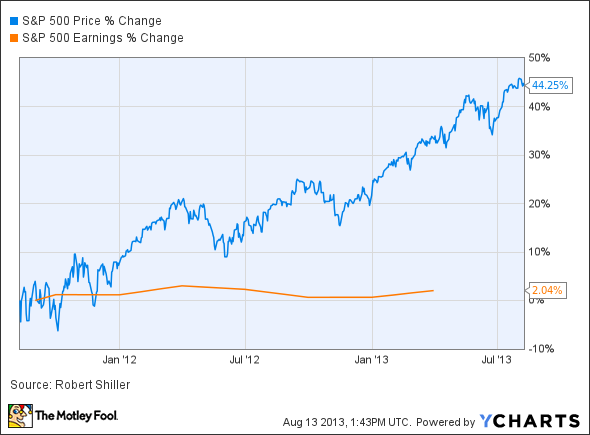 The stock market rally may well continue, but I would suggest that at this stage, valuation is becoming more of an anchor in that process than an engine.

Is Confidence Enough to Fuel the Next Leg of the Rally? @themotleyfool #stocks $^DJI $^GSPC Next Article
Current