Forget the skeptics: KFC and Pizza Hut are still huge in China.

In fact, the chains' parent company, Yum! Brands (YUM -0.12%), is aiming to make both chains' presence bigger than ever going forward, with plans to ultimately increase its restaurant count in the region from around 6,000 locations today to around 20,000 over the long term.

By comparison, McDonald's currently operates around 14,000 restaurants in the U.S. today, and hopes to have around 2,000 locations in China by the end of 2013.

But despite the fact that Yum!'s China Division opened 889 new restaurants and surpassed $1 billion in operating profit for the first time just last year, many investors can't help but wonder whether the chain has lost its luster after KFC's recent struggles in the region, which began with a now-concluded investigation into the company's poultry supply chain last December and were prolonged by an Avian flu outbreak earlier this year.

To be sure, on Friday, SEC filings showed Yum!'s China Division same-store sales had declined an estimated 10% in August, including a 12% decline at KFC and 5% growth at Pizza Hut.

Why, then, has Yum! stock managed to rise 8% so far this year, including a nearly 3% pop so far today as of this writing?

In short, August's same-store results are really much better than they first appear. 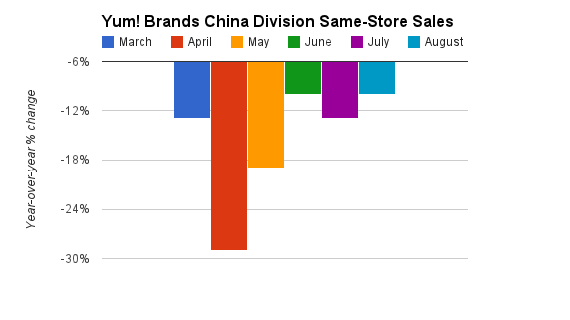 Remember, around this time last month, Yum! said July same-store sales fell 13%. Considering that represented the company's first sequential monthly decline since April, it's no surprise the announcement caused investors to fear the worst may not be over for Yum! in China.

The most recent 10% year-over-year decline, then, brings the company back to sequential monthly improvement and lends credence to management's repeated assertions that China same-store sales are continuing to improve. What's more, according to the most recent filing, Yum! still expects China same-store sales comparisons to turn positive over the previous year's numbers sometime in the fourth quarter.

Meanwhile, in spite of the current weakness, Yum! still managed to turn in worldwide system sales growth of 1% last quarter, thanks largely to 2% revenue growth from Yum!'s already substantial U.S. operations, and 6% overall growth from Yum! Restaurants International. At the same time, Yum! told investors that when all is said and done in 2013, they expect record new-unit openings for YRI and in India this year, and remain on track to open at least 700 new units in China.

In the end, I've said it before and I'll say it again: When China sales finally recover, it's safe to say patient investors who buy today will be handsomely rewarded over the long term when their company is once again firing on all cylinders.