You have probably been reading a lot of blaring headlines lately about the "takeover" of the mobile phone and tablet markets by Android-powered devices, particularly those manufactured by Samsung (NASDAQOTH: SSNLF).

Apparently, Samsung can do no wrong. The South Korean electronics giant has the top market share in smartphones, and recently reported a 26% bump in net income. The company also increased its guidance going forward.

Recent data from research firm IDC from the third quarter of 2013 suggests that the Apple (NASDAQ:AAPL) iPhone ranks second in shipments among major manufacturers, but has only 13% of the overall market share, a slight decline from the previous year.

However, Apple does not focus on market share alone. The company's goal is to produce high-quality products that customers love. Of course, to go along with customer satisfaction, the company plans to profit on the sales and return value to shareholders.

Quality is job one
It appears that Apple has succeeded on the quality front. According to the latest customer satisfaction survey conducted by JD Power and Associates, the iPhone ranked No. 1 on both of the top two wireless networks in the U.S. Samsung even lags behind in third place in one of the networks.

Apple is likely to maintain its top ranking based upon the latest iPhone releases, which are not fully reflected in the above mentioned survey.

The iPhone 5c is based on technology contained in the one-year-old iPhone 5, but is sold at a slightly lower price point than the 5s to compete in lower-end markets. It comes in a multitude of bright colors, instead of the black and white previously offered in the iPhone 5.

Comparisons of Samsung smartphones to other high-end devices compiled by the Atlantic Wire indicate that the latest offering by the company, the Galaxy S4, might not even stack up as No. 1 among Android devices, never mind those of Apple.

Sales and satisfaction up
Apple's iPhone revenue has been rising over time and generally contributing to long-term bottom line growth at the company. 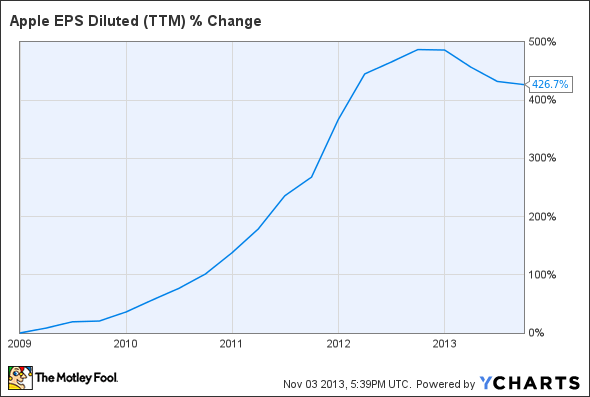 According to early reports,  the sales and satisfaction trend is continuing. The new Apple devices were brisk sellers, with a record nine million devices shipped on opening weekend.

iPad quality and market share still No. 1
Although it is decreasing, Apple still holds the top spot in market share and quality ratings in the tablet category. A recent estimate puts the iPad below 30% for the first time. Data from last year indicates that Apple held about 50% of the market share.

However, as in the case of the iPhone, Apple is focused on quality, not market share. The latest JD Power data for tablets shows that the iPad is the top-ranked device in all customer satisfaction categories except for cost. In a bizarre, and probably incorrect, conclusion, JD Power rates Samsung as No. 1 overall.

Apple also recently released updates to its tablet lineup. The iPad Air and iPad mini are likely to continue the tradition of high quality and high sales (Apple has shipped over a 170 million iPads in three years) with several new features available.

The iPad Air is thinner, lighter, and faster than previous models. It also contains the A7/M7 combo that will result in the same super-fast performance found in the iPhone, and the device has a better battery and camera, too.

The upgrade to the mini is probably even more impressive. In addition to the improved display, it also contains the A7/M7, which was a surprise to many analysts and techies. Users can now get great performance in a small package. Early reviews, including one from Walt Mossberg of All Things Digital, indicate that the new iPads are "the best on the market."

Foolish conclusion
Although Apple is losing market share in smartphones and tablets to companies such as Samsung, it continues to maintain top rankings in customer satisfaction. Recent iPhone and iPad upgrades will probably continue to delight customers and contribute to the tech giant's growth. Shareholders willing to ignore current headlines and Wall Street analysis will be rewarded.