If you find yourself with this one bank in your portfolio, it may be time to reconsider before it's too late.

Citigroup (NYSE:C) has had a pretty good 2013, and its stock is up around 23.5% year to date. It's return almost matches that of the KBW Bank Index, which tracks the returns of the broader financial sector. In fact, when compared to its three biggest peers -- JPMorgan Chase (NYSE:JPM), Bank of America (NYSE:BAC), and Wells Fargo (NYSE:WFC) -- Citigroup ties Wells Fargo for best stock performance year to date:

Although the company has been on a solid run so far this year, there are three worrisome aspects that likely indicate it may be time for investors to take their gains and sell out of this stock.

1. It's losing customers and money

Citigroup's largest business is its global consumer banking unit, and in 2012 that business represented almost half of the company's total net income. Yet its core business has had a rather rough 2013, and things do not appear to be getting better.

In its most recent earnings announcement, Citigroup disclosed that its total retail customers had fallen from 65.2 million to 64.7 million over the last year, and apart from a minor gain seen from the first quarter to the second, its total customer count has fallen or stayed flat for four of the previous five quarters: 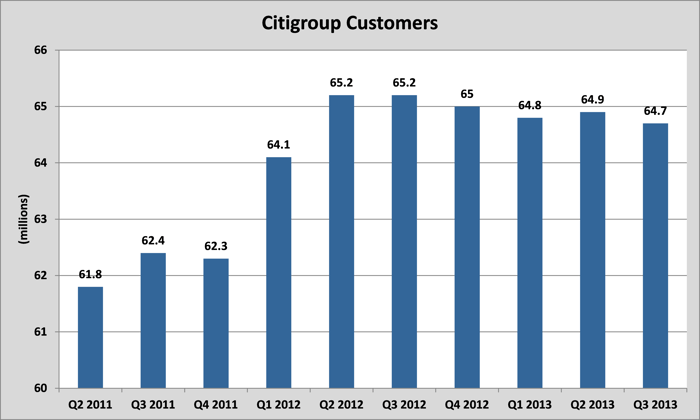 While many may think that this is not a huge deal considering that a loss of 500,000 customers is only a drop-off of less than 1%, it's troublesome that a steep decline in net income has also occurred over this time. When comparing the year through September over the previous years, we also see a big drop in the net income of its consumer business:

When you consider that the largest part of its business is slowly losing both customers and income, that should undoubtedly be a red flag in the eyes of any investor.

2. It's not growing
Not only is Citigroup watching its bottom-line results from its consumer operations dwindle, but another point of concern is the lack of growth in its tangible book value since June 2011, as shown in the chart below: 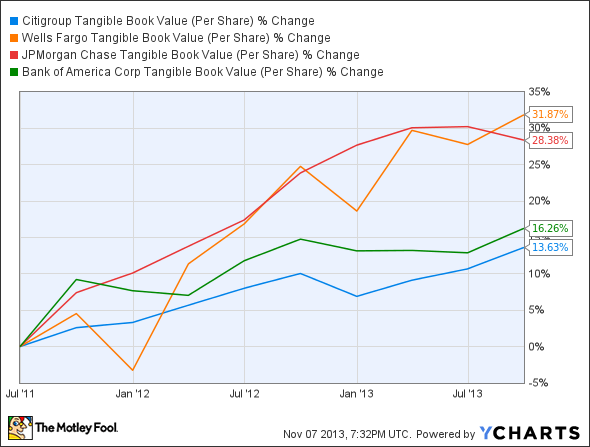 As you can see, its tangible book value growth (which is the measurable value of a bank on its balance sheet) trails even Bank of America, which has been beset by lawsuit after lawsuit and loss after loss related to its acquisition of Countrywide. In addition, both Wells Fargo and JPMorgan have watched their tangible book values grow at a rate twice as fast as Citigroup's.

Although Citigroup hasn't gotten off totally scot-free as it relates to issues surrounding its own operations, the fact that it simply isn't growing its tangible book value is troubling.

3. It's in no-man's-land
Many consider Citi principally to be an investment bank along the lines of Goldman Sachs and Morgan Stanley, but that simply isn't the reality of its business, as mentioned earlier.

This is less quantifiable and difficult to point to a specific number on a balance sheet, but Citigroup seemingly doesn't have an identity. Perhaps you could point to the fact that in 2007 its brand was valued at $23.4 billion and it has since fallen 65% to $8 billion, but the issues are even deeper than that.

When you consider the other of the big four banks, there is likely the pristine, risk-free nature that pops into your mind when you think of Wells Fargo, the regal (albeit somewhat tarnished of late) nature of JPMorgan Chase, and although Bank of America was once the most vilified of all the banks, it is now clearly recovering and on the mend. Yet Citigroup will almost undoubtedly simply make you unenthusiastically shrug your shoulders.

And when it comes down to it, any company that elicits that reaction likely isn't one worth holding onto.