SolarCity's (NASDAQ:SCTY.DL) stock has taken a drubbing this week after Sen. Jeff Sessions, R-Ala., sent a letter to the Treasury secretary asking for an investigation into solar grants and tax credits.

Investors were spooked by the potential of a federal investigation, but those are they're nothing new for SolarCity, which was under investigation by the inspector general before the company went public in 2012. In fact, it's the same tax credit taken by SunPower (NASDAQ:SPWR) and First Solar (NASDAQ:FSLR) on their solar projects. 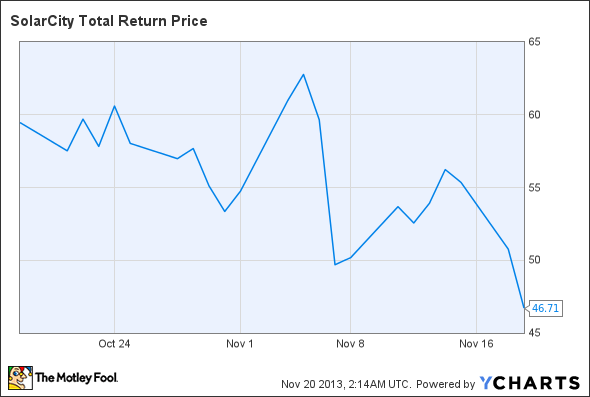 So, is the latest inquiry into SolarCity's finances a concern? Let's take a look.

What has the Feds so hot and bothered?

The investigation facing SolarCity has to do with how it accounts for solar projects and how much it received in investment-tax credits. When SunPower or First Solar builds a utility-scale project they usually sell it to an investor, making the value of the project known. But SolarCity holds the project and reports a tax value higher than cost, making the value figure a gray area.

Let's say a residential solar system costs $16,000 for SolarCity to build. That system is then "sold" to an equity investor who then takes the tax credits. I say "sold" because the project eventually ends up back on SolarCity's balance sheet, so it's more of a temporary sale that usually lasts about five years.

The argument people like Sessions are making is that SolarCity is using an artificially high value for its tax basis, essentially costing the government money.

Should you sell now?
If SolarCity is found to have inflated the value of its solar projects there will be a fine that could run into the tens of millions of dollars. That's a big hit for a company that has yet to make a profit -- and worse, it would make returns for tax-equity investors even lower, increasing the cost of capital for SolarCity.

This is a risk for investors because SolarCity is reliant on tax-equity investors to fund new projects and it may have to pay back taxes on overestimated value. I don't think it's a reason to sell today, but it's worth watching.

For project builders SunPower and First Solar, the risk is far less. SunPower has a small residential solar business, which may run into the same problems of SolarCity, but panel sales and utility-scale projects are a bigger part of its business. For First Solar, it sells projects -- so there's little doubt of their value for tax purposes.