You will soon see how one company's recent real-world performance doesn't match its stock performance. Investors have no control over this, but they do have control over investing in strong underlying businesses that are likely to reward them the most over the long haul. Two of the following companies should offer solid long-term potential, while the other likely presents an extremely risky investment: Ralph Lauren (NYSE:RL), Fifth & Pacific (NYSE:KATE), and PVH Corp. (NYSE:PVH). The primary focus of this article will be on Ralph Lauren, but that one company to avoid will also be revealed.

Two different reports
When researching public companies, it's imperative that you read their 10-Q and 10-K reports. If you skip these steps, then you will be reading press releases for quarterly reports. A company is allowed to spin results any way it wants in a press release. In quarterly and annual reports that go to the SEC, a company must report the facts. Therefore, by reading 10-Q and 10-K reports, you're giving yourself a distinct advantage. Ralph Lauren is an example of this as its press release and 10-Q send different messages.

The slight improvement in wholesale sales stemmed from the Chaps brand, but upside potential was limited due to weakness in Europe and Japan. The strong retail performance was primarily due to new store openings. Ralph Lauren raised its fiscal year 2014 outlook, and now expects 5%-7% revenue growth versus an earlier expectation of 4%-7% revenue growth. Revenue growth is always a positive, and investors often react well to it, but comps is the true indication of continuous demand because it negates the impact of new store openings.

Now to the 10-Q version. Ralph Lauren states that it might be negatively affected by the current economic environment and the lack of consumer confidence, which tends to lead to reduced discretionary spending. That's fair. More concerning in the report: Ralph Lauren has seen inconsistent and constrained traffic.

Ralph Lauren tied this all up by stating that it will aim for strict cost management in order to minimize the impact of the current economic environment, and that it's focused on maintaining the value of its brand over the long haul. Perhaps I'm wrong, but this sounds like a company that's about to dig in for a rough patch.

That said, Ralph Lauren should remain a long-term winner. Its brand is extremely valuable and well-known throughout the world. Ralph Lauren also sports a positive balance sheet with $1.41 billion cash vs. $846 million in long-term debt, it generated $931.90 million in operating cash flow over the past year, and it yields 1%. Its profit margin of 10.33% is also well above its peers.

Now let's see which one of those other companies presents concerns.

Fifth & Pacific and PVH
Do you remember when you could find people wearing/carrying the following brands with ease: Juicy Couture, Lucky Brand, and Kate Spade? That question was presented in the past tense for a reason. These brands aren't in as much demand as they were before. Consider the following top-line performance chart for Fifth & Pacific (which owns these brands) versus Ralph Lauren and PVH: 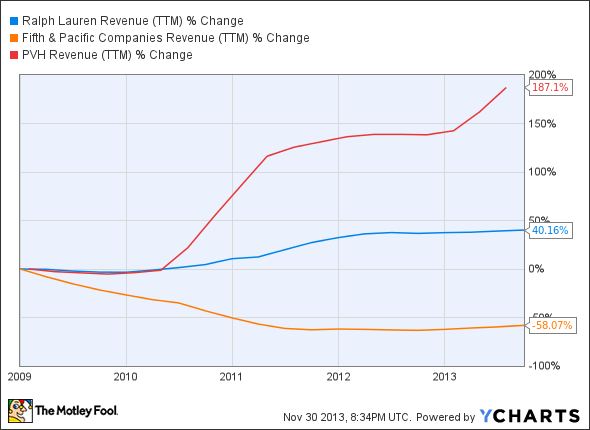 Yet, Fifth & Pacific has rewarded its shareholders the most over the same time frame: 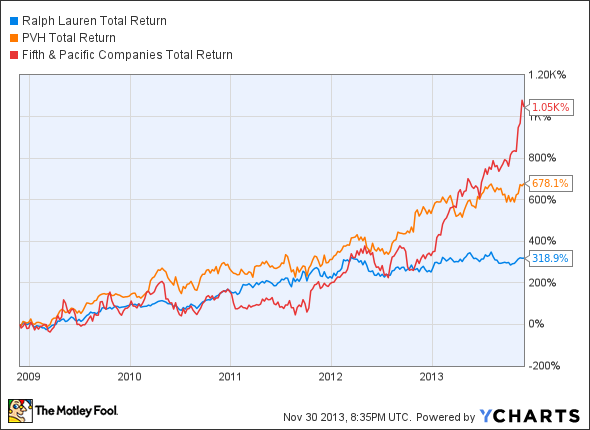 This doesn't add up, and it's yet another example of how smaller companies are moving the fastest in a raging bull market. A lot of these stock moves aren't justifiable. Not only is Fifth & Pacific lagging its peers on the top line, it sports a negative profit margin of 3.30%. As if that's not enough reason to worry, Fifth & Pacific has generated negative cash flow of $23.53 million over the past year, and its balance sheet is highly leveraged: $6.83 million in cash vs. $528.72 million in long-term debt. Furthermore, the stock is trading at 78 times forward earnings, whereas Ralph Lauren and PVH are trading at 18 and 16 times forward earnings, respectively.

Without top-line growth and with negative cash flow, and carrying over $500 million in long-term debt, Fifth & Pacific is going to have a difficult time over the long haul. The stock might appreciate in the near term, but use extreme caution with any long-term investments.

PVH offers the brands Calvin Klein, Tommy Hilfiger, Van Heusen, IZOD, Bass, Arrow, and Eagle, and the demand for its brands is high. PVH is growing faster than its peers. While its profit margin of 2.97% isn't nearly as impressive as Ralph Lauren's profit margin, PVH also sports a positive balance sheet: $628.92 million in cash vs. $4.28 million in long-term debt. PVH also generated $424.28 million in operating cash flow over the past year.

The bottom line
Ralph Lauren is sending mixed messages. While the company is likely to remain a long-term winner, these mixed messages are somewhat concerning. PVH is seeing the most demand for its brands at the moment, and its debt management is impressive. Expect Ralph Lauren and PVH to perform similarly over the long haul. In my opinion, Fifth & Pacific's stock performance will eventually come back down to reality to reflect its real-world performance.