The world recently reached a new nuclear deal with Iran, signaling that tensions are starting to ease. A number of sanctions are being lifted with the hope that more will be lifted in the coming years. If Iran sticks to the deal and relations continue to warm, then 1.5 million barrels per day (mmbpd) of Iranian crude oil could come back into the international market within the next couple years. The problem for U.S. refiners is that more Iranian crude means less profitable exports. 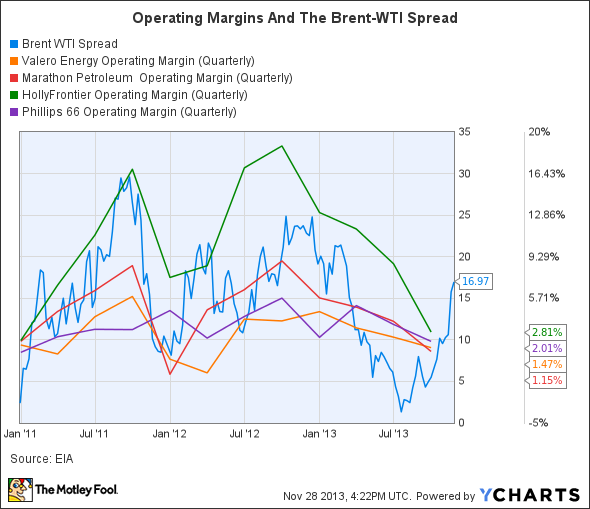 The above chart shows how refiner's operating miners are highly correlated to the spread between WTI crude and Brent crude. Federal law bans the exportation of raw U.S. crude; only refined products like gasoline or jet fuel can be exported. If Iran returns to its previous levels of oil exports it will push the Brent-WTI spread toward to its historical levels around $0.

Refiners are great income investments, but to get an accurate idea of HollyFrontier's dividend it is best to ignore the special dividends that have inflated its yield. Over the past year its regular dividend was just $1.20 per share, giving the refiner a yield around 2.4% instead of the advertised yield of 4.2%.

Marathon Petroleum (NYSE:MPC) has also seen sharp swings in its operating margin. Marathon has a number of refineries throughout the U.S., but the Midwest still provides 38% of its refining capacity. Thanks in part to the falling Louisiana Light Sweet (LLS)-WTI spread, the company's refining and marketing income plummeted from $1.69 billion in Q3 2012 to $227 million in Q3 2013.

In the next couple years Marathon Petroleum and others can expect pricing pressure as more midstream infrastructure reduces North American supply constraints. Marathon is not passively watching the market change. It recently upgraded its Detroit refinery to process more oil sands oil. Over the next two years the company is upgrading a number of its eastern assets to more efficiently process Utica shale production.

The bigger players
Valero (NYSE:VLO) and Phillips 66 (NYSE:PSX) are two big refiners with refining capacity of 2.8 mmbpd and 2.2 mmbpd respectively. The falling Brent-WTI spread has had limited impact on both companies as they were never dependent on cheap WTI to the same degree as HollyFrontier. Thanks to a more diversified refinery base investors only have to worry about small drops in profit.

Valero runs a big ethanol refinery division that has brought in just over $250 million in EBITDA from Q1 2013 to Q3 2013. Its ethanol operations decrease the impact of RIN prices on its bottom line, making Valero's overall income more stable. Don't expect Valero's earnings to expand by leaps and bounds, but it will continue to grow in the coming years. More hydrocraker investments will help it take advantage of cheap natural gas, and it is unlocking value by spinning off midstream assets into Valero Energy Partners LP.

To reduce its dependence on the volatile refinery industry Phillips 66 is trying to make its chemical and midstream operations a larger portion of its earnings. It has successfully boosted its use of Canadian heavy crudes and shale crudes while reducing expensive Brent crude to just 33% of its U.S. feedstock in the first three quarters of 2013. Its profit margin of 2.1% is not the highest, but it takes a number of years for a company the size of Phillips 66 to optimize its operations for better cash flow.

Final thoughts
Warming relations with Iran means that the world's international oil markets may see 1.5 mmbpd of additional crude in the coming years. Smaller refiners like HollyFrontier and Marathon Petroleum that are exposed to cheap Midwest crude need to watch out for even lower margins with the falling WTI-Brent spread. Bigger refiners like Valero and Phillips 66 are on safer ground thanks to their diversified operations.