How do restaurants like Golden Corral and Old Country Buffet offer a never-ending smorgasbord for $12 and still turn a profit? Much of it comes from finding the right menu items and preparing food with great efficiency. But there’s more to the story, and it has to do with old-fashioned behavioral psychology.

It's easy to see how restaurants like Chipotle and Five Guys have found success. They make just a few things, they make them really well, and with uber-efficiency. And they sell them at a reasonable, but not cheap, price. That keeps lines long, but moving fast. It also keeps the cash register ringing out $10 check after $10 check like a printer at a mint.

But how are restaurants like Golden Corral and Old Country Buffet able to charge just $12 per person for what seems like a never-ending smorgasbord of food? How can they possibly turn a profit? In short, much of it comes from finding the right menu items and preparing food with great efficiency.

But there's more to the story, and it has to do with good old-fashioned behavioral psychology. They've got us figured out, and they're guiding our choices all the way along that buffet line, from the mashed potatoes to the bread pudding. 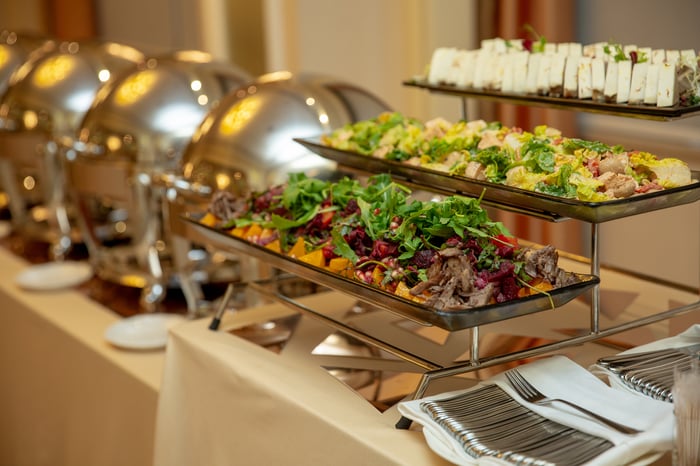 First, let's take a look at the more obvious things buffet restaurants do on the operational end to give themselves the best chance to stay profitable.

Menu items have to be chosen carefully to strike a balance between cost and quality. A restaurant isn't going to get a whole lot of repeat customers serving gristly and gray mystery meats. On the other end of the spectrum, it might be able to pack the house every night offering unlimited lobster or New York strip steaks, but it can't expect to turn a profit at $10 or $12 a diner. Instead, you'll find cheaper -- but not cheap -- cuts of meat, fish, and poultry that the restaurant can buy in bulk and use in quantity.

Food in buffets is also often prepped ahead of time, in larger quantities. There's no need to have chefs and line cooks preparing individual dishes made to order. Done right, this saves on labor costs. It also allows a restaurant to turn over tables quicker, since diners aren't waiting for food to arrive. That's important during peak business hours, when lines for tables can turn into lost dollars.

Choosing the right menu items to offer and putting out just the right amounts is no easy task. We don't have to look further than Ovation Brands, the owner of Old Country Buffet, for evidence of that. The company, then called Buffets, filed for bankruptcy protection twice between 2008 and 2012.

After emerging from Chapter 11, Ovation revamped its menu with an eye on consolidating its buffet-line offerings to reduce waste and deliver diners more of the items they want -- and that the company can produce profitably.

And managers must be meticulous about their stock-keeping. If too much of an item is prepared and sits in a chafing dish all evening, it's money down the drain.

The Not So Obvious

All that aside, there's more going on at buffet restaurants than meets the eye. It may not be obvious to diners, but buffets are often arranged with painstaking detail to guide diners so they are more likely to fill their plates in a manner that leads to full stomachs and fatter margins.

Pricier items on the buffet line – like meat or fish – are cut into smaller pieces. Rationally, a person would just take two pieces instead of one. But in reality, a diner is more likely to follow society's unwritten rule, taking a single smaller piece and moving on down the line.

The size of serving dishes further plays on our conscience. If there's a small chafing dish with a few pieces of baked haddock, we're a lot less likely to take more than one piece. At the big, full trays of potatoes and rice, we're more likely to scoop out a heaping spoonful. And those starchy, filling, lower-cost items are often positioned earlier in the line, leaving you with less room on your plate by the time you reach that meat.

If that weren't enough, smaller serving utensils also help reinforce the behaviors that benefit the restaurant. Spoons in the inexpensive starches are big. Tongs, spatulas, or forks used to move more expensive proteins to your plate may be smaller, and less geared toward moving large quantities of food at a time.

Here's another trick: The restaurant offers you all-you-can-eat food for $12, but wants you to pay for your beverages. To the diner, that doesn't seem like a bad deal. The food's what you came for, and there's plenty of it. But soft drinks are a great moneymaker for restaurants, often sold at up to a 90% profit margin. Getting diners to order drinks separately is a great way to pocket more than $1 in profit per person before they even hit the buffet line.

Old Country Buffet used to include the cost of drinks in its buffet price. It stopped that practice, and for good reason.

The Foolish bottom line
Buffets are not an easy game. It takes the right mix of menu items, the right balance between cost and quality, and meticulous attention to operational details for these restaurants to succeed. It also takes a keen understanding of the psychology involved to subtly guide diners toward filling their plates with say, red bliss potatoes before they make it to the Hickory Bourbon Beef Brisket.

But companies like Golden Corral -- which now has nearly 500 restaurants and opens a new buffet about every three weeks -- have been able to navigate the potential pitfalls and find long-term success.

And one of the ways they've been able to do so is by staying a step ahead of not just the competition -- but of their own customers.