The Department of Health and Human Services delivered mixed news on Obamacare signups for November. Is it time to panic, or is Obamacare on track to deliver exactly what was promised?

Putting it mildly, it's been an ugly beginning for Obamacare's health exchanges.

In hindsight, the website was pretty much doomed from the get-go because of inadequate time to test the complex cloud-based IT-architecture behind the federally run health exchange, Healthcare.gov, and the fact that more than four dozen contractors contributed to the build-out of the network behind Healthcare.gov. Amazingly enough, though, things are beginning to improve.

Taking things step-by-step
In late October, Healthcare.gov spokesperson, Jeffrey Zients, set a November month-end goal as to when its "tech surge" would have diagnosed and completed fixes to the federally run website to make it usable for a majority of Americans in the 36 states that it serves. Believe it or not, following a number of critical delays, including pushing the implementation of the employer mandate out a full year, Zients' promise was met, and the new-and-improved Healthcare.gov relaunched with significantly fewer problems and glitches earlier this month. This isn't to say everything is now perfect, but the system is night-and-day better compared to two months prior.

Now the focus for Americans and investors has turned back to the actual enrollment figures themselves. Initial enrollment through the first 33 days was nothing short of abysmal, with only 106,185 people fully enrolling for health insurance. Would month two, which offered minimally better federal and state-run health exchange access, fare any better?

The latest Obamacare skinny
Yesterday the Department of Health and Human Services released the results of total Obamacare enrollments for the month of November, and they were both deceptively terrible and fantastic, all at the same time!

For the month of November, full health exchange enrollments increased by 258,497, reaching 364,682 people in the first two months. This represents a 243% jump over last month's full enrollment numbers. State-run health exchanges continued to lead the charge with 227,478 signups (62.4% of all enrollees), while the number of federal signups jumped by more than 100,000 to 137,204. California's state-run exchange currently leads all states with 107,000 enrollees, while Oregon's dysfunctional exchange pulled up the caboose with a mere 44 enrollees. Florida was the state with the highest number of enrollees on the federal side with just shy of 18,000 enrollees.

After reviewing this pool of statistics you're probably thinking to yourself, "Just 364,682 signups in two months? This is going to fail!" I'll certainly give that thought process some merit, because at this pace we're going to fall well short of the 7 million signups that the HHS has been targeting. Furthermore, we can only suspect that adverse selection is likely causing the sickest and most in-need-of-care people to sign up first. In other words, if we don't see a big boost in young adults signing up for Obamacare, then insurers are going to lose out because of higher medical expenses than the premiums they're bringing in, and premiums are going to rise for everyone. 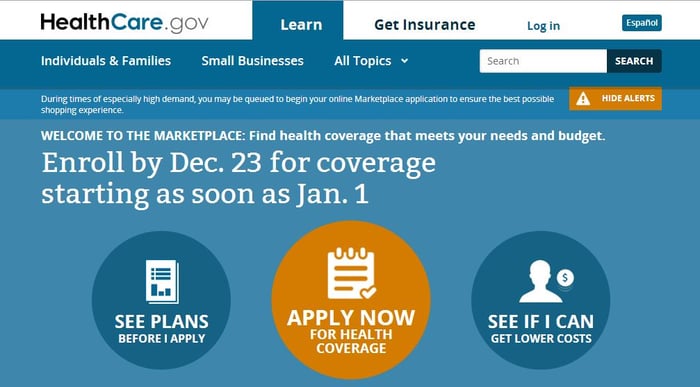 A ray of hope
But before you starting running through the streets proclaiming Obamacare's end of days, consider this: the number of enrollees that have completed the identification and application process but have not selected a plan increased by nearly another 1 million in November and now sit at more than 1.9 million! Think of these people in this context: They have completed the grueling and arduous part of the health insurance process; now all they need to do is select a plan and pay for their insurance.

Should you really be concerned that there are 1.9 million people sitting on their hands? Not really, especially considering that we have roughly four months to go before the coverage cutoff date. Let me ask you this, how many of you look forward to paying your taxes four months in advance when you owe money? Probably not too many of you, and the same applies here. As much as the currently uninsured might crave health insurance coverage, the ultimate objection is that it's a bill they're not used to paying, and they're probably going to wait until the last couple of weeks to fully sign up.

As proof, I'll again turn to the Massachusetts health reform law, which attracted just 6% of total enrollees within the first two months. Admittedly, this plan offered enrollees 11 months to sign up, whereas Obamacare's cutoff allows for approximately six-months of signups -- but all things considered, we appear to be right on schedule. If you take into account that a vast majority of those people who've completed the application process are likely to sign up at some point, and add that total to the nearly 365,000 that have already signed up, you tentatively have around 2 million people. Considering that signups are expected to be back-loaded, Obamacare's health exchanges really aren't doing as bad as the numbers on the surface would indicate.

These five companies are sitting pretty after this data
If I were looking at this from an investable perspective, I would be feeling pretty confident if I were a shareholder in private platform marketplaces such as eHealth ( EHTH -1.35% ), Aon ( AON -1.62% ), or Xerox ( XRX ). eHealth, which has operated an established private platform similar to Healthcare.gov for years and has no worries about website functionality, has seen its membership soar past 1.1 million as frustrated consumers look for ways around the federally run option.

Also, many businesses are realizing that it's less time consuming and costs less if they simply give their employees or retirees a subsidy and let them shop for health insurance on their own. That's where Aon and Xerox have come in and snagged some fairly sizable corporate clientele. As long as fears about technical glitches and distrust toward the Obamacare website exist, these three stocks could be metaphorical gold for investors.

I'd also be encouraged if I were a WellPoint ( ANTM -1.05% ) or Centene ( CNC -1.22% ) shareholder. On the one hand this is a bit of a catch-22, in that weak full enrollments should be a disappointment, not a positive, for these companies -- and that's partially true.

However, companies which are focused on government-sponsored enrollees, such as WellPoint, which purchased AmeriGroup for $4.5 billion last year to become the nation's largest Medicaid-based insurer, and Centene, which prides itself on low-income and Medicaid-based members, should be thrilled with the news HHS data. As of the end of November, 803,077 members were determined to be eligible for Medicaid CHIP assistance by the health insurance marketplace. This figure is up by 406,816 from the previous month, or 103% overall. We really wouldn't expect insurers to struggle to sign up people who qualify for subsidized health insurance, but it's nice to see the data translating into what I suspect will be positive results for these two insurers.