Let’s take a look at 4 key investing takeaways from Synta’s volatile year, and how larger companies, like Infinity Pharmaceuticals, Roche, and GlaxoSmithKline, fit into the company’s growth prospects for 2014.

2013 was a rough year for Synta Pharmaceuticals (NASDAQ: SNTA), which lost more than 50% of its market value since the beginning of the year. The company, which focuses on developing small molecule drugs for cancer and inflammatory diseases, took investors on a year-long roller coaster ride, hitting a 52-week high of $11.88 in January before diving to a low of $3.70 in November. 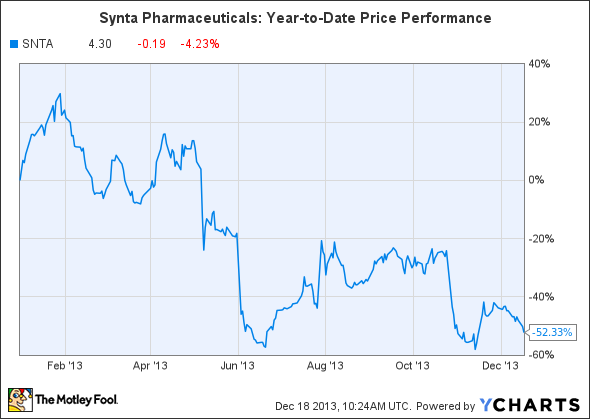 Synta has one main drug, ganetespib, in clinical trials. This drug belongs to a new class of drugs known as Hsp90 (heat shock protein 90) inhibitors. Hsp90 plays a role in the maturation of client proteins, which help cells growth, divide, and survive. Compared to healthy cells, cancer cells are more dependent on elevated levels of Hsp90 to proliferate -- therefore, inhibiting the production of Hsp90 could stop certain types of cancer.

Unlike other targeted therapies which seek out specific mutations, such as Pfizer's Xalkori or Roche's (RHHBY 0.62%) Herceptin, Hsp90 inhibitors are believed to be able to disrupt several signaling pathways simultaneously to stop tumor cell proliferation.

Synta is primarily focusing on developing ganetespib as a treatment for non-small-cell lung cancer, or NSCLC, and breast cancer. If approved, the drug is expected to hit annual peak sales of $450 million to $500 million.

1. Synta is an all-in bet on the success of Hsp90
The big challenge for Synta is proving that Hsp90 inhibitors are actually a feasible cancer treatment. Let's take a look at the current status of some other Hsp90 inhibitors.

Considering the rate of suspensions and failures, the risk that Synta faces becomes clear -- it's one of the only publicly traded companies that has placed an all-in bet on the success of Hsp90 inhibitors.

2. Trials and tribulations for its pipeline
Four clinical trials -- two for NSCLC and two for breast cancer -- are the keys to unlocking ganetespib's growth potential.

Over the past year, however, optimism has faded, due to several factors. In June, Synta reported that during the GALAXY-1 study, patients given ganetespib showed a median survival rate of 9.8 months, compared to 7.4 months for the group only given chemotherapy. However, the drug only reduced the risk of death by 18%, far lower than the company's original projection of 31% in October 2012. As a result, the stock plunged 34% -- its steepest decline in four years.

In September 2013, Infinity's Retaspimycin HCI was terminated, casting even more doubts on the future of Hsp90 inhibitors as a viable treatment for NSCLC. Retaspimycin was intended to treat squamous cell carcinoma, a type of NSCLC commonly caused by smoking.

Synta's one-year follow-up for GALAXY-1 the following month was positive, however -- it reported that patients had an overall survival rate of 65%, with a survival rate of 10.7 months compared to 7.4 months on chemotherapy alone. However, there were concerns about vast differences in enrollment and treatment patterns across testing centers, which Synta admitted could have affected the study.

An additional offering of an 16.1 million shares in November, aimed at boosting the company's light cash position of $53.4 million, has caused the stock to slide over 30% since late October. However, Synta reported proceeds of $60.4 million from the sale, prior to the deduction of underwriting discounts, commissions, and other expenses.

3. Brighter days ahead?
Despite all these challenges, there is a silver lining on these storm clouds -- Synta recently reported positive interim results from its ENCHANT-1 trial of ganetespib as a breast cancer treatment for HER2+ patients and triple-negative breast cancer, or TNBC, patients.

This was the second bit of encouraging news regarding ENCHANT-1 that investors received this year. The first announcement, a similarly positive outcome for its phase 1 study, caused shares to spike 45% at the end of July.

In other words, Synta appears to have a brighter future in breast cancer than in NSCLC. However, investors shouldn't get ahead of themselves yet -- the ENCHANT-1 trial group is very small, and percentages could significantly shift as it progresses into a larger phase 3 study.

4. Lack of interest from big pharma
In my opinion, Roche's lack of interest in Hsp90 is also troubling. Roche, the largest cancer drug company in the world, is well known for investing in promising new oncology treatments, such as ImmunoGen's antibody-drug conjugates (also known as "cancer smart bombs"), Halozyme's Enhanze technology (which turns IV drips into quick-acting shots), Inovio's cancer vaccines, Curis' signaling pathway technology, and many others -- but it has no known interest in Hsp90 inhibitors. In fact, Novartis is the only large pharmaceutical company developing an Hsp90 inhibitor.

Five years ago, Synta had a major partner, GlaxoSmithKline (GSK 0.77%), which believed that its melanoma drug would be a potential blockbuster. Instead, the drug failed a phase 3 trial in 2009 after more people died taking Synta's drug than the standard treatment. Today, Synta no longer has any major backers -- which should be a clear warning that the company still has a lot to prove.

The Foolish takeaway
In conclusion, Synta is a volatile, all-in bet on an unproven technology.

The termination of Infinity's Hsp90 drug and the suspension of higher profile ones from Biogen and Exelixis are troubling. In addition, the constant changes to the projected reduction of death in NSCLC patients during GALAXY-1 urge me to take its initially impressive ENCHANT-1 results with a grain of salt.

Synta could bounce back in 2014, but it has to get a lot of things right. Investors should pay attention to the overall status of Hsp90 drugs and the interest of larger pharmaceutical companies, which could indicate if ganetespib has a promising future ahead.