The words “Target” and “Awesome” aren't often synonymous these days, but a recent innovation might end up acting as a positive catalyst for the company.

A retailer will not survive, let alone thrive, without innovation. While Target (NYSE: TGT) has been at the center of controversy lately, it has quietly innovated in one area that could fuel its top line down the road. Innovative measures such as the one discussed below are necessary for Target to keep pace with competitors like Wal-Mart Stores (WMT 0.62%), Amazon.com (AMZN -1.08%), and Costco Wholesale (COST -6.56%).

The Awesome Shop combines Pinterest and Target.com products. If a product has a four of five consumer rating on Target.com and is one of the most pinned Target.com products on Pinterest, then it makes the Awesome Shop. This is a page you can visit, browsing products that other consumers fell in love with. This then gives you, the consumer, an opportunity to purchase a product that others have enjoyed. And if you're looking for a gift, it can be an ideal source of information and gift ideas. You can also pin items yourself. If you would like to check out the current Target Awesome Shop, you can do so here: http://awesomeshop.target.com/

Target's game plan is to offer a highly addictive service that is likely to lead to a lot of impulse buying. This, of course, is a potential catalyst for sales, which in turn would benefit investors.

Target's biggest headwind right now is the recent data breach, where data was stolen from up to 40 million customers. This will lead to declining customer trust, expensive lawsuits, and increased costs for consumer protection improvements. Let's also throw in increased costs due to extra hiring to deal with extremely high call volumes over the holidays. The data breach was a major negative event. But Target wasn't performing as well as you might have thought prior to the breach anyway.

Lack of efficiency
A good way to determine a company's efficiency is to see if its revenue is outpacing its selling, general, and administrative expenses. Target has failed to accomplish this feat over the past year: 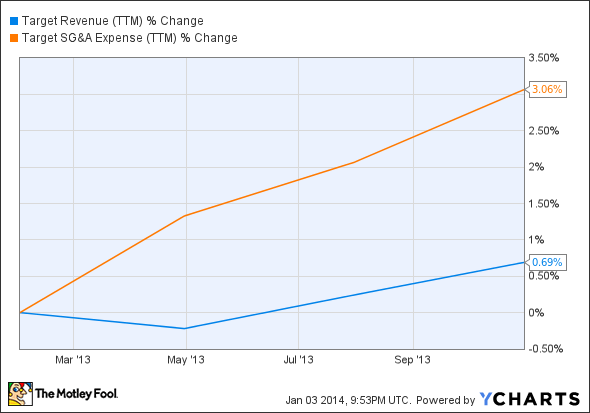 What might surprise you is that the same can be said for Wal-Mart, Costo, and Amazon. 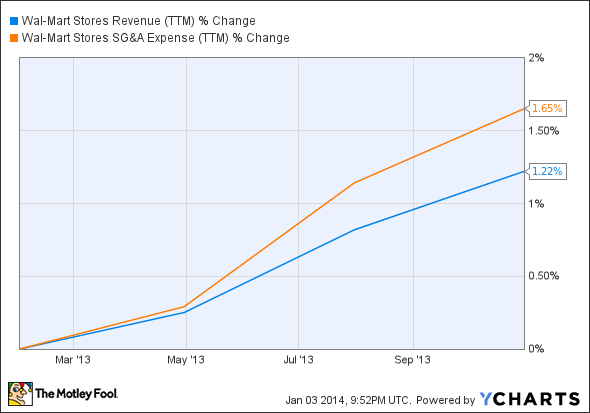 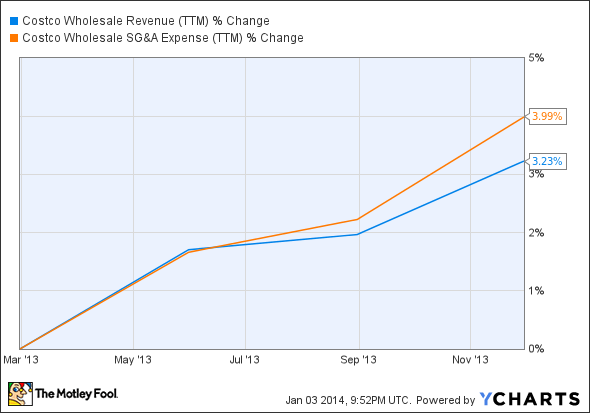 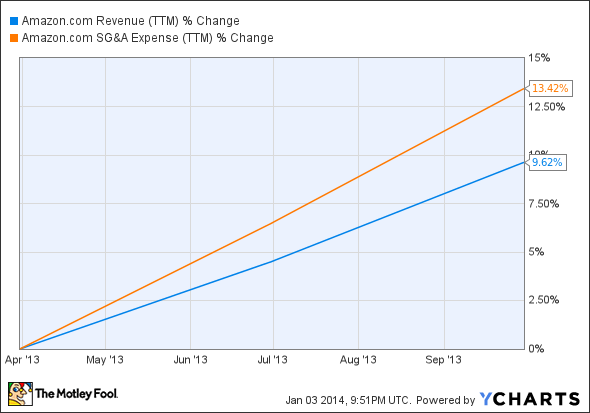 Wal-Mart and Costco have the smallest gaps to close, which is a positive for them, at least on a relative basis. As you might have noticed, Amazon is growing its top line the fastest, but it's also trading at 1,436 times earnings. That's not a typo. Amazon is most certainly a long-term winner, as more people shop online by the day, but the companies' earnings multiple is concerning. Wal-Mart, Target, and Costo are trading at 15, 17, and 25 times earnings, respectively. Amazon doesn't pay a dividend, as it's still in a high-growth phase. Wal-Mart, Target, and Costco yield 2.4%, 2.8%, and 1%.

As far as Target goes, its recent innovation is a positive sign. As long as there is innovation, a company can recover from almost any significant setback. That said, it's going to take time for Target to regain the trust of its customers. Personally, I'd keep Target on the watchlist, but please do your own diligence prior to making any investment decisions, even if it's just a watchlist addition.