Please ensure Javascript is enabled for purposes of website accessibility
Log In Help Join The Motley Fool
Free Article Join Over 1 Million Premium Members And Get More In-Depth Stock Guidance and Research
By Jason Hall – Jan 22, 2014 at 9:23AM

After heavy spending for the past several years to build a refueling network for truckers, will Clean Energy Fuels finally turn profitable in 2014? Probably not, but its relationships with GE and UPS will help it move much closer.

Though the first nine months of 2012, Clean Energy Fuels (CLNE 1.28%) lost $59 million, on the way to losing $101 million for the full year. In 2011, the company lost $41 million. Through the third quarter of 2013, losses were at $32 million, putting the company on track to vastly cut its losses from a year ago. However, with only about half of the 150 planned stations in America's Natural Gas Highway (ANGH) complete, and less than 20 in operation as of the end of Q3, what are the chances the company can turn a profit in 2014? Honestly, slim to none.

However, that doesn't mean it's a bad  investment, or a company to avoid. Strong partnerships with United Parcel Service (UPS -0.17%) and General Electric (GE 0.31%) -- both of which are also betting big on natural gas for transportation -- point toward 2014 being a year of transition for Clean Energy. Besides, there's a difference between losing money, and investing for big growth. 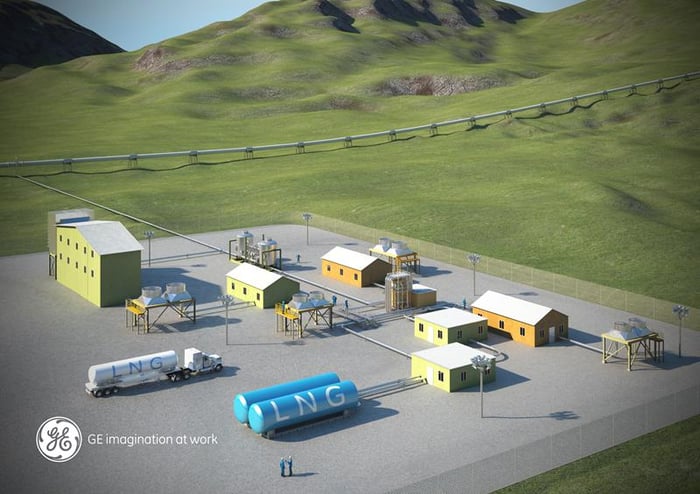 Momentum is building
In September, a consortium including Ferus Natural Gas Fuels, GE, & Clean Energy Fuels, called Eagle LNG Partners, was announced. Much as the agreement with Mansfield expanded Clean Energy's reach "behind the gate," Ferus' strength as an oilfield service provider, and expertise with cryogenic plants and logistics, adds reach and scope to what Clean Energy can deliver. GE brings technical know-how through its GE Ventures unit, while GE Energy Financial Services will provide necessary funding. This consortium will focus on developing projects for "operators of high-horsepower equipment in trucking, oil and gas, rail, marine, remote power and mining who now burn diesel or fuel oil and are interested in converting to lower-cost, cleaner-burning natural gas," according to the press release.

In October, GE Capital and Clean Energy announced a "strategic alliance to accelerate adoption of natural gas in the trucking industry." In essence, this plan will open up additional finance options to fleet owners, reducing up-front costs and helping them more quickly reach the overall cost savings that are key to the value of natural gas versus diesel.

These two agreements with GE are on top of the November multi-year agreement with UPS to both supply LNG to two private UPS fueling stations, and to open three ANGH stations to support UPS trucks on the road. For UPS these are early steps in a massive initiative to shift a large part of its fleet away from diesel and to natural gas. The company has already committed to only buy NG-powered trucks for the next few years, and currently has an order of 700 LNG tractors to be delivered in 2014.

But before you get too excited about those 700 trucks, that's barely a drop in the bucket of UPS' more than 96,000 total vehicles -- of which less than 3,000 are fueled by alternatives to gas and diesel today. However, when we start to parse the types of vehicles up, those 700 tractors are 12% of the company's 5,700+ over-the-road haulers. That's a pretty sizable start.

Strong steps forward, but not quite there yet
Seeing stalwarts like GE and UPS betting big on natural gas vehicles is a very positive sign for the industry. UPS has a lot at stake, with fuel being one of the company's largest expenses, so it taking a big bite of LNG for its trucking fleet is an indication that the cost advantage for NG versus diesel is very compelling, and UPS thinks it will be sustainable.

GE's bet on NG is about more than just vehicles -- or at least just on-road ones. The Eagle LNG Partners venture will provide exposure to marine and rail, as well as engines for power generation and other remote fueling needs. This is just part of the company's massive GE Energy business unit, but one that should show significant growth over the next decade. GE Capital, as many know, was at the center of nearly crippling the company during the financial crisis, largely due to the company's consumer credit unit, which is being either spun off or sold at some point in 2014. This could free up additional funding for expansion of finance activity in natural gas for vehicles.

Where does this leave Clean Energy?
While UPS' 700 tractors, and all the groundwork that has been laid over the past couple of years are steps in the right direction, let's remember a couple of key facts.

Simply put, it's incredibly early in the game, and Clean Energy Fuels has a ton of work to do before we can reasonably expect consistent profits. Right now, if the company doesn't invest in that refueling infrastructure, nobody's going to buy those trucks. As CEO Andrew Littlefair said on a conference call last year, someone "had to get in front of it," and that's what the company is doing right now. If things go even relatively well for Clean Energy in 2014 and beyond, those profits will definitely come, and patient investors will be rewarded.