Nike has a partnership with the almighty NFL, which Under Armour can’t compete with. However, Under Armour just made a strategic move that will improve brand recognition and possibly brand loyalty.

Under Armour (UAA -2.90%) CEO Kevin Plank is known for making bold moves. Without this type of personality, Under Armour would have remained the $110,000 company it was back in 1997, which was also the first time Plank set foot on Notre Dame's campus. Plank didn't know it at the time, but he would be forming an important partnership with Notre Dame later in life. 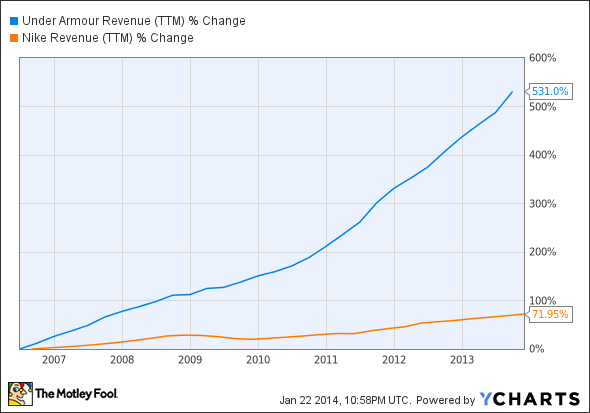 What are the details of the Under Armour deal with Notre Dame? What does it mean for the long haul? Is Under Armour really capable of catching Nike?

No longer my Adidas
Adidas (ADDYY -3.14%) had a partnership with Notre Dame since the late 1990s, but the contract will expire at the end of June. Adidas weighed its investment versus brand value and determined that continuing its partnership with Notre Dame wasn't in the company's best interest. Up until now, Adidas also had the highest paid contract in college sports with Michigan -- $8.2 million per year. That was up until Under Armour decided to make a splash, as it often does.

Under Armour moves in
The value of the 10-year deal between Under Armour and Notre Dame is expected to be $90 million, including cash and merchandise. This is a big number for Under Armour, which generated $93.4 million in operating cash flow over the past 12 months and has a balance sheet with approximately $186.4 million in cash and short-term equivalents versus about $54.2 million in long-term debt.

Affordable? Absolutely. But it might hinder Under Armour's ability to use capital for reinvestment in its business. On the other hand, Under Armour uses 11% of its annual revenue for marketing, and as you can see from the chart above, Under Armour has no problem driving the top line. The point here is that while it's a significant hit, Under Armour should recover.

And let's not forget that this is Notre Dame we're talking about. It might not be the Pittsburgh Steelers or Dallas Cowboys, but Notre Dame has 11 National Championships and seven Heisman Trophy winners to its credit. Fighting Irish is a household name, and while Under Armour isn't allowed to use any signage in Notre Dame Stadium, it will leverage this partnership toward its global marketing campaign and for social media initiatives.

Targeting Nike
Make no mistake about it. One of Plank's like goals: catching Nike. This will be difficult. Nike is one of the most recognizable brands in the world. When it comes to football, in 2012, Nike paid $1.1 billion to have the right to dress NFL players (not literally). Sports analysts estimate total revenue after five years of $2.5 billion. That's good business. That's Nike.

Nike's deal was also more affordable on a relative basis. For instance, Nike generated $2.7 billion in operating cash flow over the past 12 months, and its balance sheet has approximately $5.2 billion in cash and short-term equivalents versus about $1.4 billion in long-term debt.

The only way Under Armour would ever be able to supplant Nike from the NFL is if it grows so much over the next decade that it will be capable of outbidding Nike.

The Foolish bottom line
Notre Dame is Under Armour's 13th college partnership. This partnership comes at a steep cost which could limit the potential for any significant investments in the near future. However, Under Armour isn't concerned about the near future. It will recover from this steep cost. Over the long haul, it will lead to increased brand exposure, which makes it another step toward catching Nike.

Based on Under Armour's meteoric rise and highly focused and determined leadership that forms highly strategic relationships, Under Armour is capable of catching Nike over the long haul. It might take a decade or two, but it's more likely to happen than not happen. However, this is only my opinion. Please do your own research prior to making any investment decisions.