What does Facebook's big fourth-quarter numbers and its newest app mean for investors?

Facebook (META 0.49%) shares soared about 14% this week on impressive fourth-quarter results and an innovative new app. Here is the backstory.

Accelerating growth
The conservative way to value any growth stock -- especially those growing as fast as Facebook -- is to assume that the company's current levels of growth are not sustainable. With assumptions like these, many analysts may model their Facebook valuations by predicting that its current levels of growth will immediately decelerate -- gradually at best.

But what happens when a growth stock defies gravity and its revenue growth actually accelerates? For three quarters in a row, this has been the story for Facebook. The company's advertising revenue, which accounts for 90% of the social network's total revenue, is growing at accelerating rates. In fact, these rates are exploding. 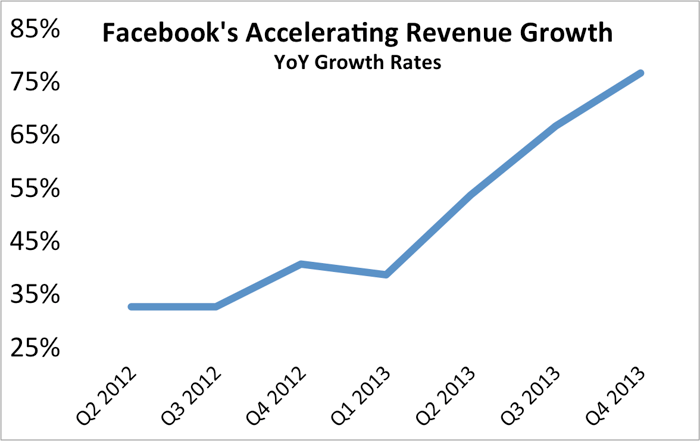 Other key metrics
One metric to check every quarter is engagement. While advertising growth is great for the business, investors want to ensure that engagement is not suffering as Facebook optimizes the news feed for monetization.

Total revenue was up 63% from the year-ago quarter and net income was $523 million compared to $64 million in the fourth quarter of 2012.

Facebook wants to replace your paper
Facebook's gain during the week was also aided by its announcement Thursday morning of a new app called Paper, which "helps you explore and share stories from friends and the world around you."

The app will deliver personalized news using both computer algorithms and human curators. It will be available for download on iOS in the U.S. on February 3.

Paper is great news for Facebook investors, as it is yet another way the company is attempting to solidify its spot as a central hub of the world's human communication. If the app does turn out to be a success, it would strengthen Facebook's sustainability through a stronger network effect.

What about the stock?
With substantial revenue growth, a proven ability to generate free cash flow, and continued innovation, there is certainly reason to have incrementally more confidence in Facebook stock today than before these recent announcements. But a after a run-up in the stock price on an already-bullish valuation, the news doesn't necessarily mean investors should buy Facebook stock.

On the other hand, the run-up also shouldn't provoke investors to sell, either. In fact, Facebook's continued execution and innovation provides a convincing case for current shareholders to continue to hold the stock.

Daniel Sparks has no position in any stocks mentioned. The Motley Fool recommends and owns shares of Facebook. We Fools may not all hold the same opinions, but we all believe that considering a diverse range of insights makes us better investors. The Motley Fool has a disclosure policy.