After losing $2.5 billion of its market cap, 40% of its U.S. workforce, and the U.S. market for its only FDA-approved drug Iclusig, Ariad (NASDAQ: ARIA) is slowly making progress in 2014.

Iclusig, a cancer drug that was shelved last fall, is making a comeback for a smaller population of leukemia patients with new warnings of clotting and heart failure risks. The announcement was made in mid-December of last year that the FDA had revised Iclusig's U.S. Prescribing Information and Risk Evaluation and Mitigation Strategy, but it wasn't until the new year that the treatment was officially reintroduced. The day of the FDA announcement saw a 30% spike in its stock price – an improvement from the 80% drop that came with the drug's removal from the market last fall. 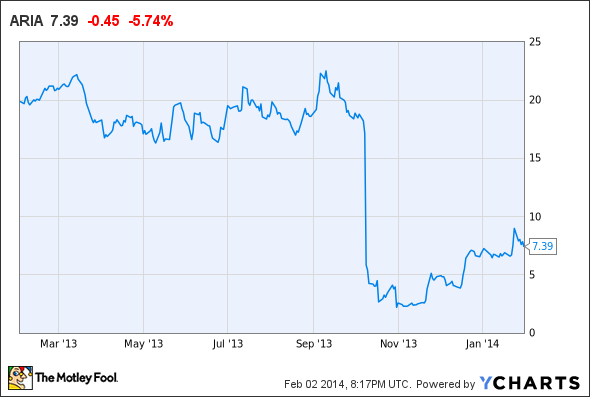 Following that announcement, rumors flew on a potential takeover with possible buyers Eli Lilly, GlaxoSmithKline or Shire. All parties involved declined to comment and the only action that came after was Ariad's announcement that it had granted license to Specialized Therapeutics Australia to obtain approval for Iclusig in Australia.

A complicated history
The FDA requested the drug be pulled from the market in October after Phase III studies revealed increased risk of blood clots, a move that sent value plummeting downwards. The company adopted a poison pill a week later, and Ariad laid off nearly half of its U.S. workers as part of cost-saving measures to spare $26 million.

While the drug was off the market, 350 existing patients were granted permission to continue on the drug, and Ariad even shipped free three-month supplies to some of these patients while the FDA hashed out a return to market.

Iclusig survived subsequent scrutiny by European Medicines Agency, allowing Ariad to stay afloat with sales in the E.U. and with sales from U.S. patients given special permission by the FDA to continue therapy. Specialized Therapeutics Australia is now the responsible agent for spurring sales of Iclusig in Australia, further expanding the global market for the troubled drug.

Now what?
Of the new indications, Ariad expects a U.S. market of approximately 1,300 patients. There is still the question how many of those patients will be prescribed the drug, though. The new labeling marks Iclusig for leukemia patients with tumors positive for the T315I mutation that have proven resistant to all tyrosine-kinase inhibitors like Sprycel and Gleevec, which are produced by Bristol-Myers Squibb (NYSE: BMY) and Novartis (NYSE: NVS) respectively.

In contrast to Ariad with a single approved drug and an exclusive focus on cancer, both Bristol-Myers and Novartis are much more diverse in their portfolio with a wide expanse of currently FDA-approved products. As such, the tanking of Iclusig did not necessarily shift value over to either company. The new labeling of Iclusig as essentially a drug of last resort is also unlikely to effect Sprycel or Gleevec sales in any significant way.

Aside from just effects on Iclusig sales, the FDA also imposed a hold on several Phase II and Phase III studies. It has not yet been determined how or if these programs will restart.

As part of the return to market, Iclusig will also undergo additional studies to test dosages to determine if blood clots occur in a dose-dependent manner. If they do and efficacy is retained at a lower dose, Iclusig could be re-marketed at a lower dose and for a greater patient population.

The future
With so many uncertainties, Ariad may have a chance of coming back and the status quo may then represent an opportune moment to get in cheap. While CEO Harvey Berger has been beating the pulpit saying the company is back to its baseline from last fall, the company will still likely struggle with the stigma of its major drug being pulled from the market. With such a restricted new label, expansion looks unlikely-even Ariad's ability to fully conduct studies will be limited by the safety concerns. Without that, it seems near impossible that Ariad would ever recapture the market that it had prior to the revelation of blood clot risk.

However, it is notable that when Iclusig was nixed, physician and patient lobbies came in droves to allow current patients to continue on the drug while it was off the market. It is entirely possible that the same lobbies will come out in full force now, although their success is certainly not absolute. With so many variables, it will certainly be worth waiting for at least first quarter earnings before saying Ariad is a viable investment again.