Please ensure Javascript is enabled for purposes of website accessibility
Log In Help Join The Motley Fool
Free Article Join Over 1 Million Premium Members And Get More In-Depth Stock Guidance and Research
By Todd Campbell - Feb 2, 2014 at 10:00AM

Forest's upcoming patent expiration for its best selling drug smacks of when Lexapro went off patent in 2012.

If it wasn't bad enough to lose 50% of its sales when Lexapro went off-patent in 2012, Forest Labs (NYSE: FRX) faces another stiff challenge when its current best seller, Namenda, loses patent protection in 2015.

Namenda's pending expiration will likely get more investor attention as the year progresses, but given Forest gets high marks for navigating the post-Lexapro world, Namenda's expiration may not prove all that difficult to overcome.  After all, shares have climbed since Lexapro lost exclusivity. 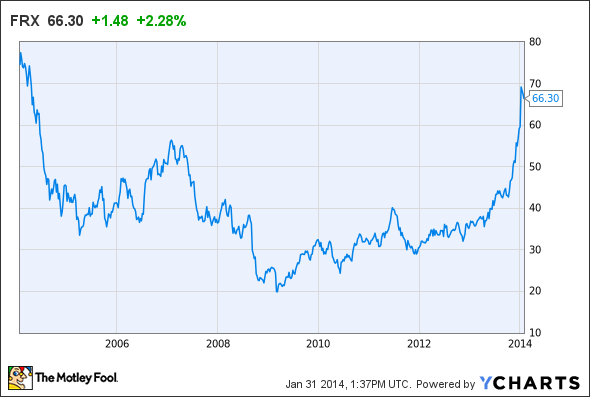 Resurrecting growth
The loss of Lexapro's $2 billion in sales won't be made up overnight, but new drugs and two acquisitions has Forest on a path likely to get it back above the $4.6 billion in total sales notched in the fiscal year prior to Lexapro losing exclusivity.

Sales of drugs launched over the past three years totaled $375 million in the calendar fourth quarter, up 60% from a year ago.  Leading that growth were rising stars Daliresp and Viibryd.

Daliresp, a treatment that won approval in 2011 for chronic obstructive pulmonary disease, or COPD, saw its sales jump 53% from a year ago to $27 million last quarter.  Viibryd, a treatment for depression also approved in 2011, saw its sales grow 30% to $53 million in the quarter.

Forest also appears to have another COPD winner in Tudorza, which launched in late 2012. Sales of that drug improved to $20 million from $17 million quarter-over-quarter. And Linzess, which was co-developed with Ironwood as a treatment for irritable bowel syndrome, generated $51 million in sales last quarter, up nicely from $34 million in the previous quarter thanks to a 23% lift in prescriptions. That brought Linzess' gastroenterologists market share north of 20%. Sales of Forest's Teflaro, approved in early 2011 for skin infection, also grew, increasing from $15 million to $22 million quarter-over-quarter.

Overall, Forest thinks its existing sales team can double or triple the number of physicians prescribing Saphris. Forest also estimates Aptalis will boost sales by $700 million, adding $0.78 in earnings per share in 2015, thanks in part to the elimination of $125 million in costs.

Upcoming headwind
Those additions go a long way to making up for sales likely to be lost to a generic version of Namenda. However, Forest isn't relying solely on those new drugs and acquisitions. The company also launched a new extended release version of Namenda -- Namenda XR -- last summer.  Forest hopes it can convert many of Namenda's current patients to this new longer lasting formulation.

To give Namenda even more protection, Forest is also working on a supplemental NDA for a combination drug that matches up Namenda XR with Aricept, an alzheimer's drug made by Pfizer (PFE 3.59%). Despite losing patent protection in 2010, Aricept still generated sales of $52 million in the third quarter for Pfizer; a $200 million a year run-rate. Forest estimates 70% of patients being treated with Namenda are also taking Aricept. That suggests a convenient one drug dose would be applauded by doctors and patients.

Combining for the future
But it's not just Namenda Forest is bolstering by developing new combination therapies. It's also matching up its second best selling drug Bystolic, used for hypertension, with valsartan, a drug previously sold by Novartis (NVS 0.87%) as Diovan prior to patent expiration in 2012.

Sales of Bystolic grew 21% to $131 million last quarter, but Forest thinks targeting first and second line use through a combination drug can ramp revenue even faster given Novartis was collecting over $4 billion in revenue a year from Diovan prior to the drug going off patent.

Forest is also working with AstraZeneca (AZN 2.59%) on a therapy combining ceftazidime with avibactam for the treatment of abdominal and urinary tract infections. Forest and AstraZeneca expect to report data from a phase 3 study in the middle of this year.

However, that data may not be necessary given the significant unmet need for new treatments prompted the FDA to give the combination a qualified infectious disease product designation, or QIDP. The FDA is willing to accept an NDA using phase 2 results and the QIDP designation means that the FDA will make its decision eight months after the NDA is filed, rather than 12 months.

Fool-worthy final thoughts
Forest has cut part of its workforce and announced plans to consolidate its R&D in a bid to boost profit. Those moves are part of a broader cost savings plan designed to remove $500 million in annual expenses by 2016. That's good news for investors worrying Namenda's 2015 patent expiration will spear earnings.

For now, a combination of fast growing new drugs, acquisitions, and early affects of cost cuts has Forest projecting earnings per share of $1.25 to $1.35 this year, up from the company's prior guidance for $0.95 to $1.15 per share.  Growing bottom line optimism and $4.5 billion in cash on its balance sheet suggests there's plenty of financing available for more bolt-on acquisitions too, suggesting investors may see more profit-friendly news this year.