Americans are getting paid less, getting fired, or just giving up altogether -- and it’s destroying the United States economy.

The United States economy is in trouble. Employment is the backbone of any economy, and there are three reasons jobs today just ain't as sweet as they used to be. Here's why Americans are getting paid less, getting fired, or are just giving up altogether.

1. Uneducated only, please
The United States economy was built on the backs of John Rockefeller, Henry Ford, Rosie the Riveter, and countless others who transformed our nation into a manufacturing machine.

But while manufacturing has brought the United States economy unprecedented wealth, it's recently been more headache than help. Outsourcing, improved technology, and a global recession have mangled manufacturing's role as America's everlasting employer.

Since its 2009 bailout, General Motors Company has been cutting jobs and trading out high-paid workers for cheaper labor. The automaker has hired around 18,000 hourly production workers, allowing the company to remove skilled trade jobs. The Center for Automotive Research says General Motors Company saves approximately $57,000 a year when it hands a pink slip to a high-skilled $32-per-hour earner and hires a $15-per-hour employee instead.

2. Subsisting on services
But manufacturing might not even matter much to the United States economy. Today, the sector employs around one-tenth of America's workforce, while the services sector has soared to nearly 90%.

General Motors Company topped the top employer list in 1960, but the biggest spots in 2010 were all filled by services corporations. In first place, Wal-Mart Stores (WMT -0.10%) employed an astounding 2.1 million people -- that's equal to the population of Houston, the country's fourth-largest city.

The biggest goods-producing employer in 2010 was Hewlett-Packard Company (HPQ -0.74%), with just 324,600 employees. Not only is that less than General Motors Company employed in 1960, but it's shrinking even more. Hewlett-Packard Company announced on New Year's Eve that it will cut 5,000 more jobs, bringing its total termination count to 34,000 -- 11% of its entire workforce.

For a closer look at services, the Bureau of Labor Statistics periodically releases data on the hottest occupations in the United States economy. For May 2012 (the most recent data available), retail salespersons, cashiers, and restaurant workers snagged the top three spots. Collectively, these three industries alone employ a staggering 10.6 million Americans. 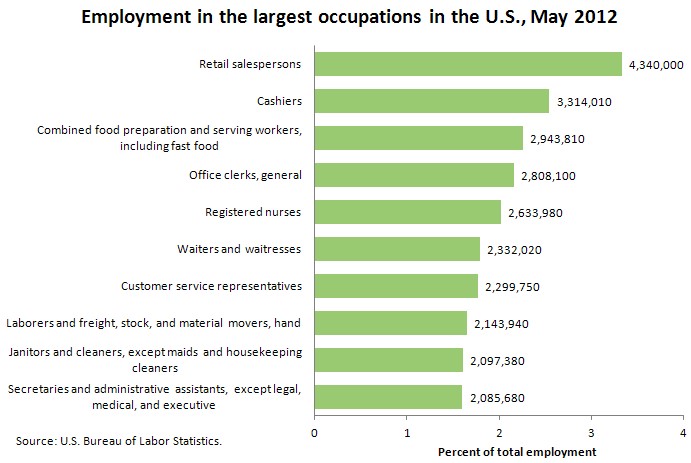 But the news isn't all good for services. The Bureau of Labor Statistics also tracks hourly wages, and our nation's largest employers are also paying pennies compared to manufacturing. While General Motors Company is happy to hire $15-per-hour workers, the average cashier makes just $9.21.

The lowest earners list is littered with services workers. Food preparation workers have it worst, earning just $7.92 per hour. That's lower than the minimum wage for 15 states. 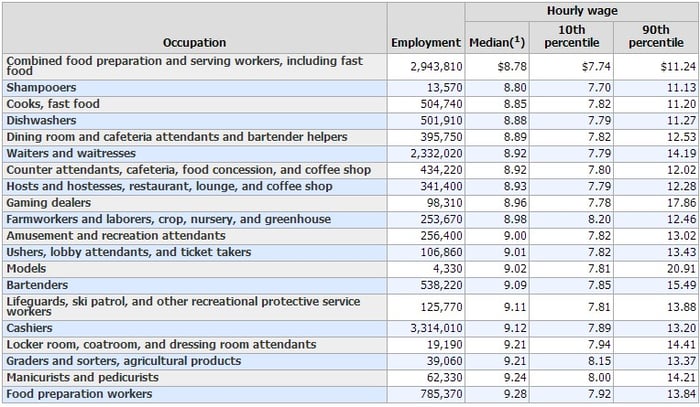 3. Giving up for good

Source: National Archives; Unemployed wait outside a soup kitchen in 1931.

While the services sector keeps its employees on subsistence wages and manufacturing jobs continue to get cut, the biggest problem may be getting workers to work-period. The global financial crisis pushed the United States economy's unemployment rate from an enviable 4.5% to an ugly 10% in just two years' time. 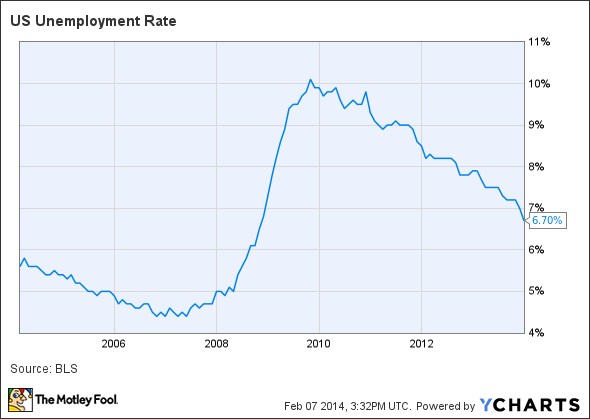 US Unemployment Rate data by YCharts

But although rates are back down to 6.7%, it's not because employers are hiring. Many Americans are simply giving up and leaving the work force altogether, making numbers look better than they actually are. Since 2007, the number of employable Americans looking for work has dropped from 66.4% to a measly 62.8%, the lowest since 1978. 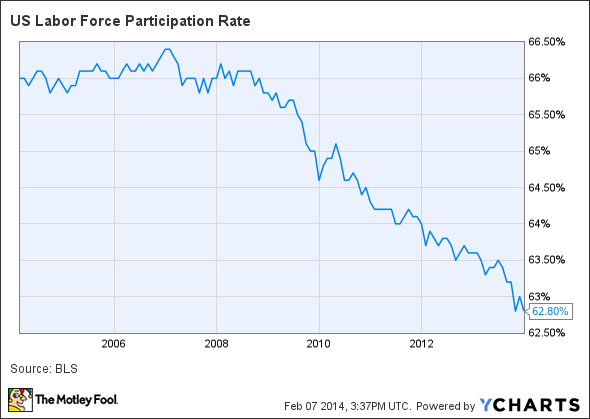 Justin Loiseau has no position in any stocks mentioned. The Motley Fool recommends General Motors. We Fools don't all hold the same opinions, but we all believe that considering a diverse range of insights makes us better investors. The Motley Fool has a disclosure policy.