Cisco's third-quarter guidance was somewhat weak, but the company still has upside potential in 2014.

Cisco (CSCO -0.49%) is under-performing. Its stock price is nearly 20% worse off than the S&P 500 on a yearly comparison. The company's recent acquisition history has been underwhelming, and its corporate execution has been disappointing. The company appears to be moving into a zone whereby all it has to do is internally execute, and the stock price will likely go higher. For this reason alone, Cisco is worth a Foolish look.

What you already know about Cisco
Cisco's second-quarter results came in with an 8% sales decline, when the company had previously forecast a fall of 8%-10%. In addition, its sales decline is hurting gross margins because they came toward the bottom end of its 61%-62% guidance range. Given that it's guidance for the upcoming third quarter was for a 6%-8% sales decline, it's reasonable to assume that gross margins will be relatively weak in the next quarter as well.

While this was obviously new news to the market, Cisco's results actually told investors more about what they already knew about the company. 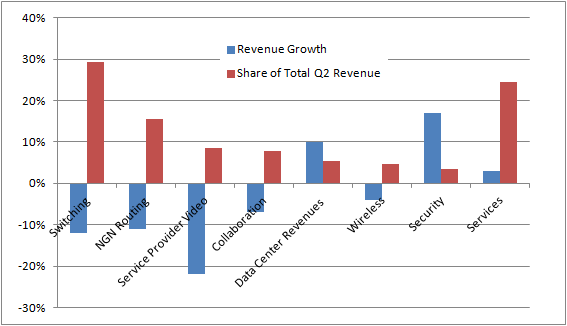 It gets worse, too. Collaboration revenue remains weak. In this regard, investors have a right to question Cisco's management over previous acquisitions such as video camera manufacturer Pure Digital Technologies for $590 million, and video conferencing company Tandberg for $3.3 billion. They don't appear to have done much for the company's performance in collaboration. The $6.6 billion acquisition of set-top box manufacturer (service provider video segment) Scientific-Atlanta in 2006 has hardly covered Cisco's management in glory, either.

In addition, growth in wireless and data center revenue has weakened too, and security's strong growth is partly due to the completion of its acquisition of Sourcefire in 2013. In short, none of Cisco's product segments put in a particularly strong performance. Similarly, its services growth is coming into doubt. 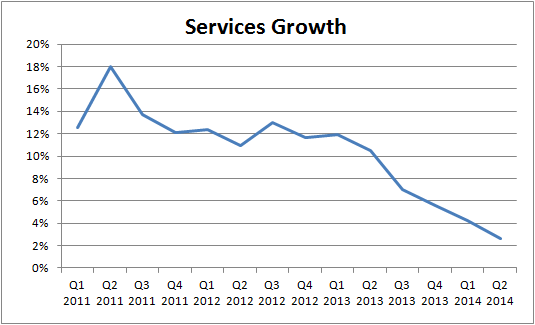 Given that its services segment's growth is dependent on previous product sales, it would not be surprising to see services turn negative in future quarters. Within all this doom and gloom, is there any good news?

Cisco's positive takeaways
Cisco's CEO, John Chambers, sounded optimistic on the conference call and, as this article points out, the company actually raised its guidance for 2015-2017 at its analyst day in December. Positive takeaways from the results include:

Strong orders in the U.S. indicate that Cisco's problems are not necessarily due to competitive positioning, and emerging market orders appear to be bottoming. The book-to-bill ratio suggests growth going forward, and the lack of pricing pressure indicates that Cisco has margin leverage if/when it ramps up sales of its new products in switching, routing, and cloud-enabled set-top boxes.

What Cisco and IBM offer investors
In a sense, Cisco is becoming an investment proposition similar to IBM (IBM 0.03%). Both companies look like a good value on an earnings and cash flow basis, but both face challenges to grow revenue in 2014.

In IBM's case, it's trying to hit its target of $20 in earnings in 2015 by a mix of cutbacks, divestitures, and a shift in investment to growth areas like big data analytics and cloud computing. For example, IBM is reported to be looking at the sale of its semiconductor unit, a move that would call into question its ability to retain leadership in some of its computing applications in the future. Investors shouldn't be surprised if IBM takes such measures, because it has a challenge to hit its guidance in 2014.

Cisco's bottom line
With regard to Cisco, it needs to execute with its intent to ramp sales in its core switching and router segments. Analyst estimates are around $2.00 in earnings for 2014, which puts Cisco on a forward P/E ratio of around 11.3 times earnings. Throw in the possibility of around $9.5 billion in free cash flow (representing more than 10% of its enterprise value) for 2014, and the stock looks very cheap. The market seems to be pricing in some more disappointment, and if this argument is correct, all Cisco needs to do is execute well on its product transitions and the stock will go higher in 2014.